This brick Georgian manor dates to around 1735, originally sitting on a large plantation with a long history stretching back to the earliest European settlements in Virginia . Architect Richard Taliaferro, Powhatan's first owner, most likely built the house. It passed through many hands in the late eighteenth and early nineteenth centuries. During the Civil War, a fire destroyed the interior of the house, and while it was rebuilt, many of the details of the original architectural style were lost. In 1948, a restoration project returned the house to an appearance similar to its original state. The house sits amid ancient oaks and is now part of a resort.

Powhatan, courtesy of Virginia Department of Historic Resources (reproduced under Fair Use). 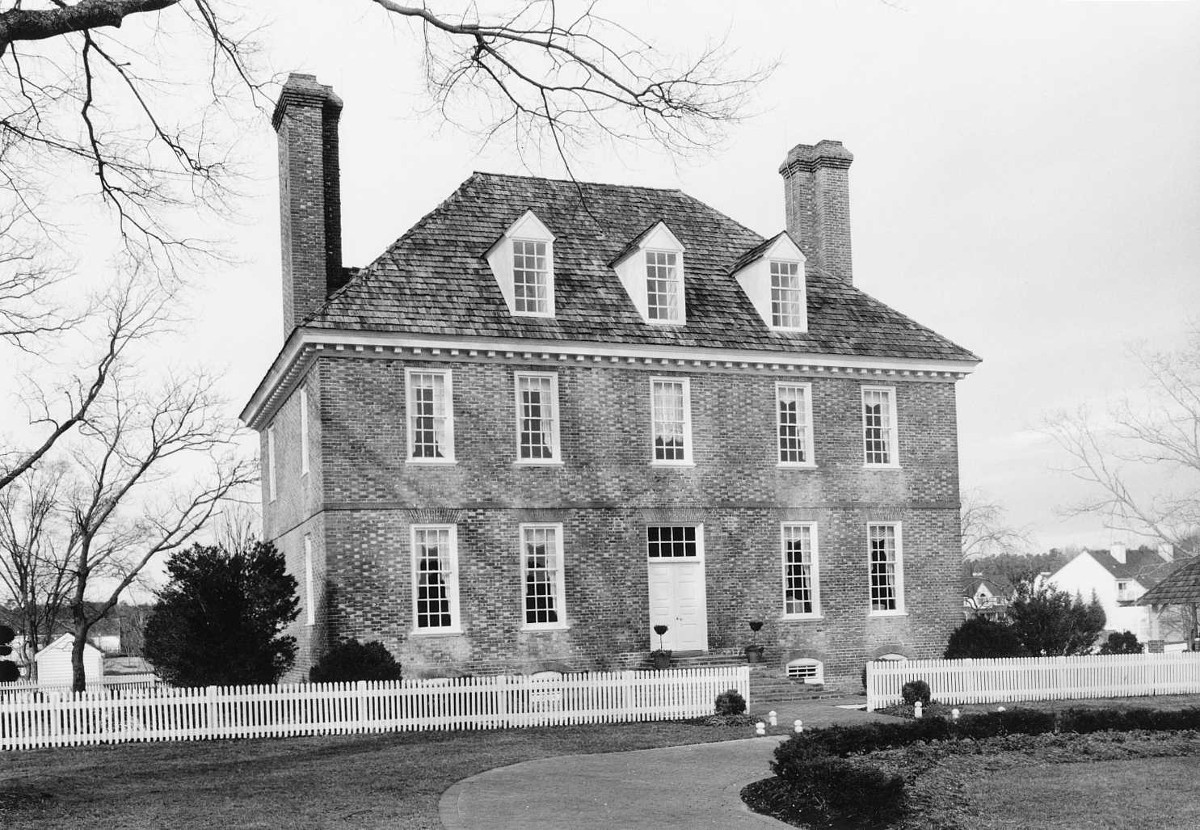 The name of this house traces a long history; it is named for a plantation dating to the early 1600s, which was named for Powhatan Creek to its west, which was in turn named for the Powhatan Indian Confederations. The first Virginians to occupy this land were Richard and Benjamin Eggleston. One of their descendants, Elizabeth Eggleston, married Richard Taliaferro (1705-1779) and it is most likely that he built the Powhatan manor house between around 1735 and 1749. Taliaferro was a master architect who renovated the Virginia Governor's Place in 1749 and had also served as Justice of the Peace in the 1730s and Sheriff in 1741.

The house is an example of American Early Georgian architecture, a two-story brick structure, five bays across and two bays deep. The bricks are laid in the Flemish bond pattern. Two T-shaped chimneys rise above the hipped roof with corbelled and gauged chimney caps.

Upon Taliaferro's death in 1779, he bequeathed Powhatan plantation and manor to his son Richard Jr., a a colonel during the American Revolution. It was a prosperous estate, where the Taliaferros raised ten children. After Richard Jr.'s death his wife Rebecca Cocke continued running the plantation until her death in 1810. The husband of one of her granddaughters, Richard Hannon, purchased the 1075-acre property at this time. It passed to Pleasant Akin, then Shadrack Alfriend, and then to tenant farmers before being purchased and returned to a plantation in 1827 by Dr. Thomas Martin.

During the American Civil War, Union troops burned the house, which gutted the interior. Martin's son William was living at Powhatan at the time of the 1862 fire. A cannon ball from the period was found embedded in a chimney. Renovations rebuilt the house's interior and roof after the fire, but most of these elements were removed in a 1948 restoration. This restoration returned the roof shape from a gable to a hipped structure with lines based on marks on the chimneys. The house has dormer windows, but it is unknown whether these would have been original features. The masonry and interior woodwork in the Early Georgian style dates to 1948 rather than the colonial period.

The property is informal, with large shade trees, including ancient oaks. Crop lands surround the house. The Historic American Buildings Survey documented the house in 1940, at which time the owner was Edward M. Slausson. The National Register of Historic Places recognized the house in 1970.