The section of 3rd Avenue between 9th and 10th Streets is the oldest commercial district remaining in the city of Huntington, West Virginia. These structures were established in the late 1890s and the early 1900s, and were home to the premier retailers in Downtown Huntington. Touma Real Estate Holdings, LLC, has historically renovated and preserved the mentioned structures, and has given them new life so that they may continue to serve patrons of Huntington for generations to come. The restoration of this block, along with the addition of Pullman Square, has revitalized Downtown Huntington. All of these structures are included in the Downtown Huntington Historic District on the National Register of Historic Places.

A vintage postcard depicting this block of 3rd Avenue prior to the addition the the Anderson-Newcomb Building. 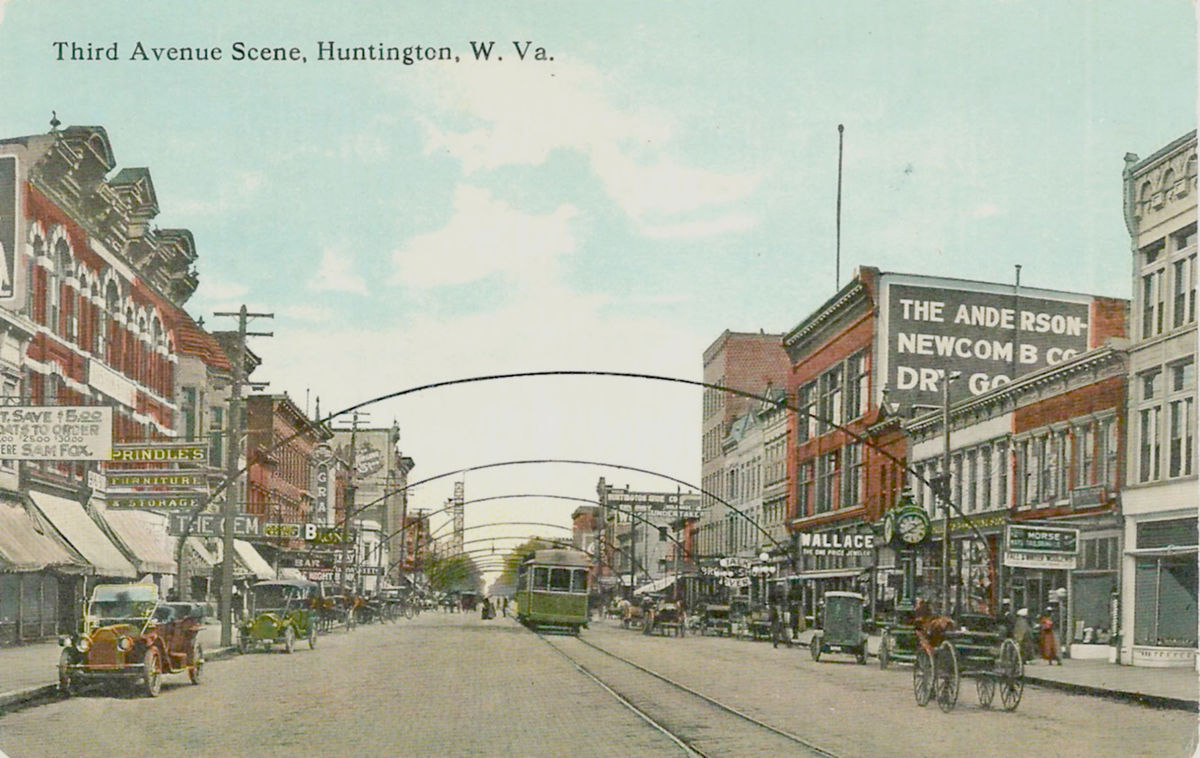 A vintage postcard depicting this block of 3rd Avenue prior to Urban Renewal. 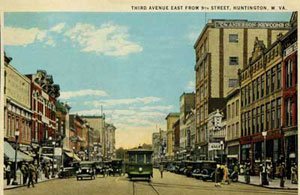 The Broh Building and 9th Street in the late 1890s. 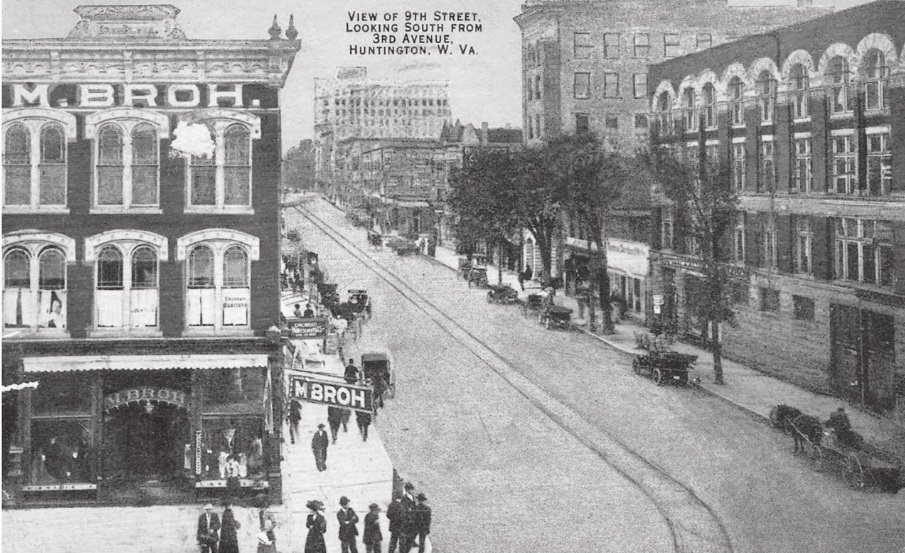 The original appearance of the Prindle-McCrory Building. 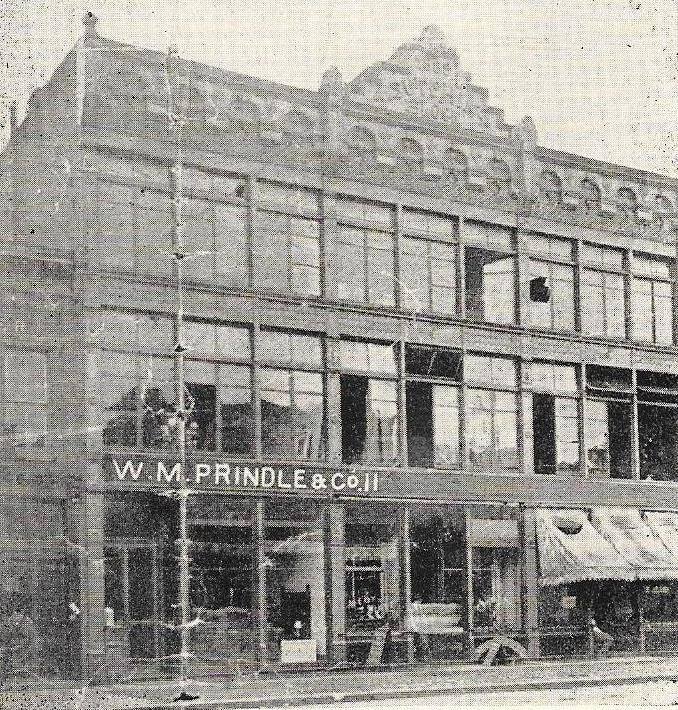 Patrons of Huntington celebrating the 35th anniversary of Anderson Newcomb. A bus stop and a Starbucks are located where they are standing today. 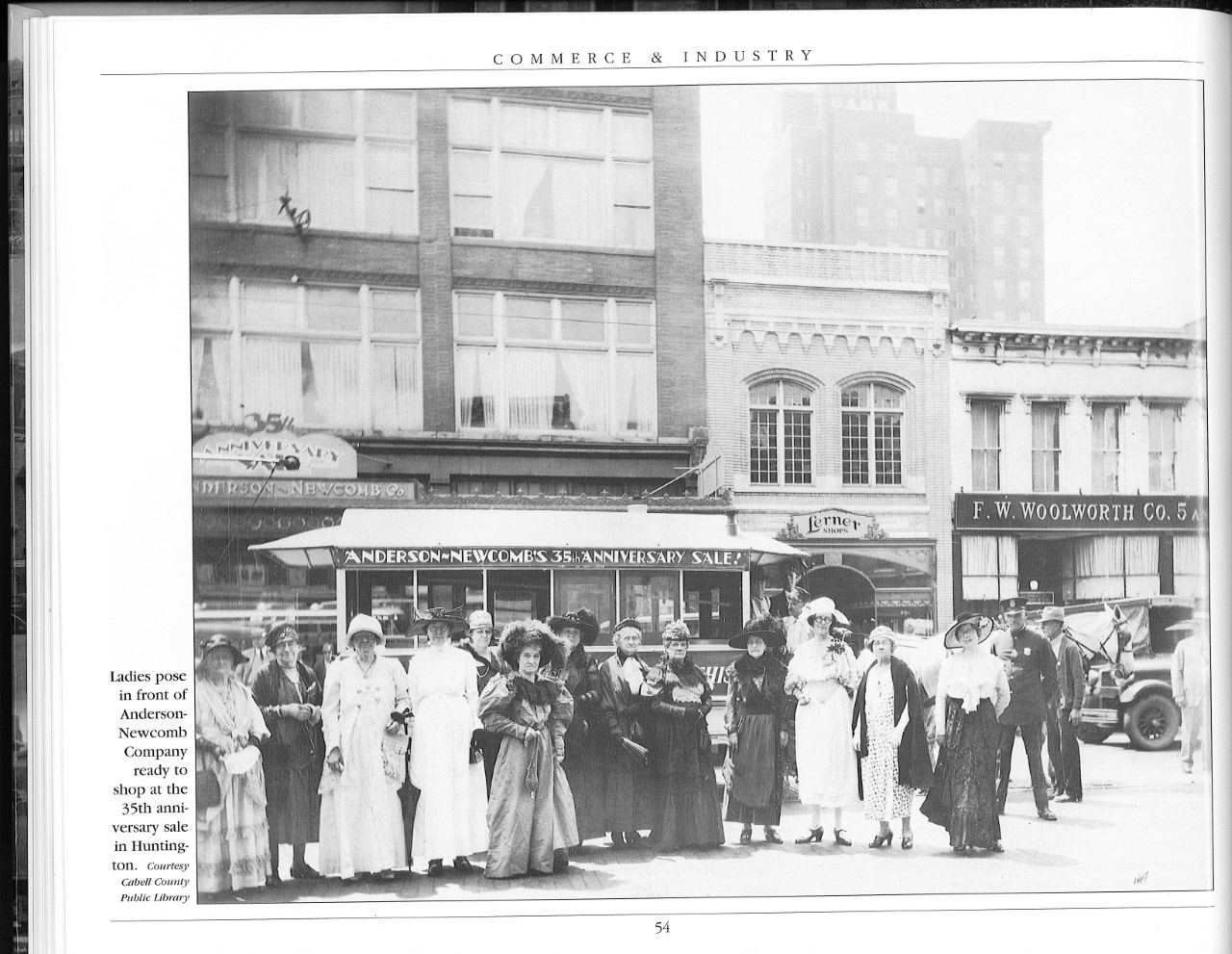 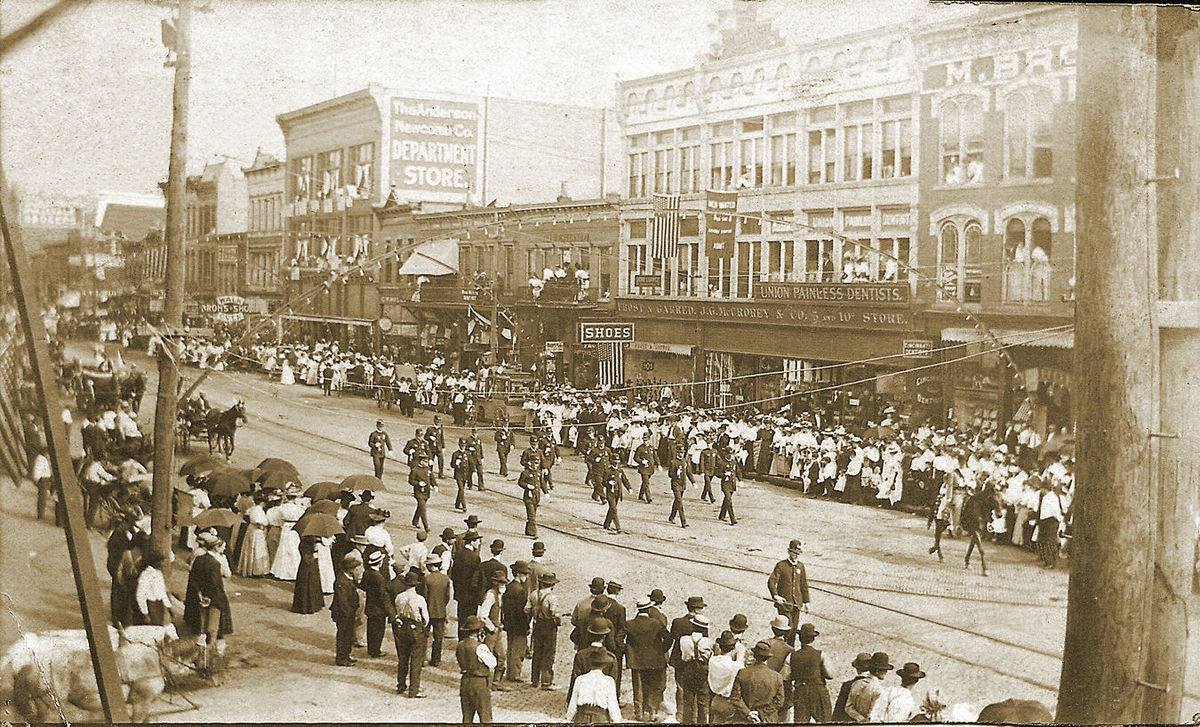 The first major flood in Huntington was in 1913. 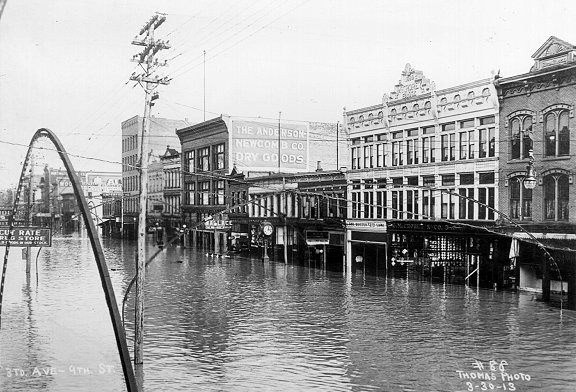 Then and now. The block still serves as a major area for retail and dining. Image donated by Touma Real Estate Holdings. 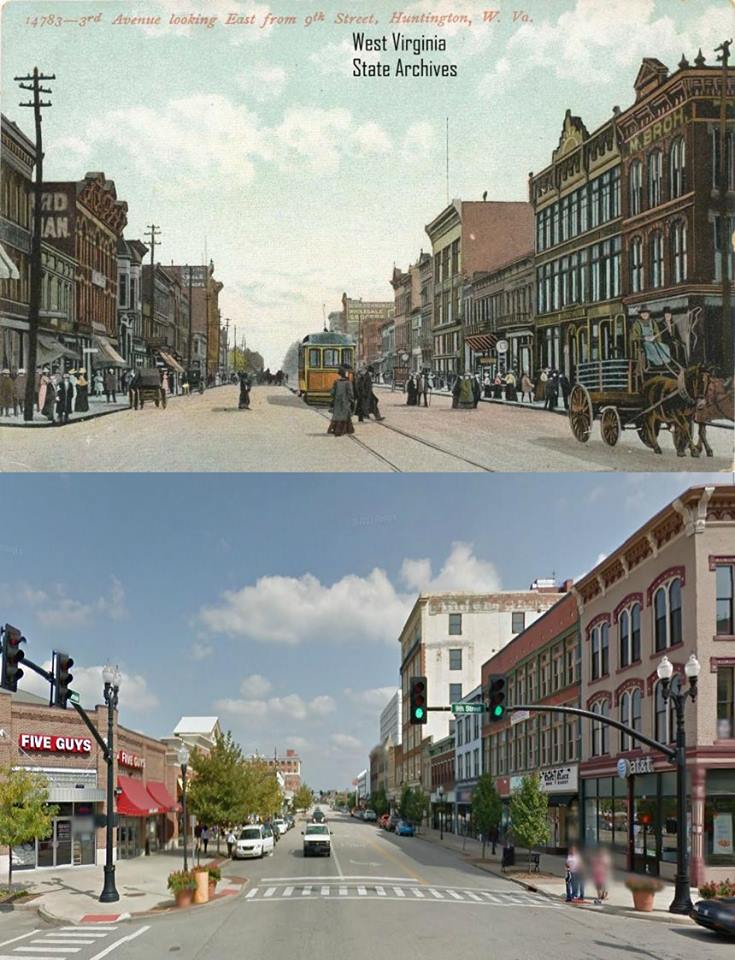 The Broh Building was established in 1889, and is the oldest commercial building in Huntington that is still in existence. A German immigrant, Adolph Broh, was a professional tailor in New York until he became a Confederate soldier in the Civil War. Broh was injured during the Battle of Shiloh, and returned to tailoring after the war ended. He opened several shops in Kentucky, and a shop in Huntington, WV, that he trusted his sons, Mike and Julius, to operate in 1887. The Broh Brothers moved to Huntington from Cincinnati, Ohio, and hired architect James B. Stewart to build the Broh Building to house their tailoring business. The Broh Building housed a men’s clothing, furnishing, and shoe store until the early 1900s. Mike and Julius were among Huntington’s top businessmen, and were charter members of the Ohev Sholom congregation.

The exterior of the first floor of the Broh Building underwent renovations in the 1960s that hid the historic façade with metal siding and ceramic tile. In 2005, Touma Real Esate Holdings, LLC, started the process of historically renovating the Broh Building. During the restoration process, original cast iron columnns were discovered with the removal of the metal siding and ceramic tile from the 1960s.

The Prindle-McCrory Building was established in 1889, and originally had ornate cornices that have since been removed due to deterioration. This building has been home to many local businesses through-out its time, starting as a furniture business, then a McCrory’s Five and Dime, and various retail and food businesses. The building also has an entrance along 9th Street, located beneath Queen Anne Regency Bay Windows.

W.M. Prindle moved to Huntington, WV, from Fairfield County, Ohio, in 1887, to start a furniture business with his brother, R.S. Prindle. Together the brothers formed W. M. Prindle & Company, and occupied the space at 905 3rd Avenue. In 1903, the furniture business was incorporated as the Prindle Furniture Company, and also opened two additional stores in Charleston, WV, and Portsmouth, Ohio. In 1911, W.M. Prindle sold his shares of the company to R.S. Prindle, who operated the company until 1922.

John Graham McCrorey opened his first five and dime store in 1882 in Pennsylvania, and had 1,300 stores by the company’s peak in the 1950s. McCrorey named his stores, “McCrory’s,” to save money when creating signs for his stores. To save confusion, McCrorey legally changed his name to McCrory once his business became successful. The stores sold shoes, clothing, house wares, candy, toys, cosmetics, and featured a lunch counter at the Huntington, WV, location. In 1992, the chain filed bankruptcy and closed the majority of their stores. The remaining stores shifted to Dollar Stores in the late 1990s.

In September of 1892, H. J. Homerich moved to Huntington, WV, from Martinsburg, WV, to establish a fine jewelry business. In 1901, C.F. Reuschlein moved to Huntington, WV, from Cumberland, MD, and joined Homerich’s business. In 1909, Homerich purchased the famous clock from Seth Thomas Clock Company for $1,600. Due to the success of his business, Homerich moved his jewelry store to 316 9th Street in 1914. Reuschlein took over the business in 1931 when Homerich retired, and would rename the jewelry store to its current title in 1947. In 1948, C.F. Reuschlein Jewelers and the clock moved to 940 3rd Avenue, and moved again in the 1970s. In 2006, the jewelry store moved to its current location of 947 3rd Avenue to be closer to the traffic of Pullman Square.

The Woolworth Building was established around 1900, and was home to F. W. Woolworth Co. 5. In the 1950s, the front of the building was covered with metal veneer, and the cornice and brackets underneath had been removed. The brick and mortar deteriorated over time as is was hidden by the metal. The building has since been historically renovated to match its original appearance by using images from the 1937 flood as examples.

The Holswade- Kresge Building was established in 1875, and was redesigned in 1925 by Edwin Alger in an Art Deco style. The building’s exterior was again changed in the 1960s when a metal façade was added. The metal panels caused the original brick work to deteriorate, but were repaired and replaced during a historic renovation project.

W.H.H. Holswade was a furniture store established by William Henry Harrison Holswade in 1875. The family owned business was famous for selling customized wooden furniture, as well as caskets. In 1915, the property was leased to the S.S. Kresge Company. Sebastian Kresge was an early investor of the McCrory five and dime stores, and eventually gained control of all the McCrory stores in Detroit, Michigan. This led to the establishment of the S.S. Kresge stores that were almost identical to the McCrory stores. The S.S. Kresge Company evolved to become the chain known as Kmart.

The Gideon Building was established in 1915 by Sam Gideon, and replaced the Ricketts Building that was built in the early 1890s. The Ricketts Building was a five story brick building that was badly damaged during the flood of 1913. Sam Gideon was a German immigrant who served as a Captain in the Civil War, and then became a very involved citizen in Huntington, WV. Sam Gideon hired architect Edwin Alger to build the structure that would house the Samuel Gideon Men’s Clothing and Furniture Store, or the Gideon Building.  The Gideon family sold their store to the W.T. Grant Company, who resided in the Gideon building until the mid-1970s, and was responsible for boarding up the windows of the building to give it a warehouse façade. The Amsbary & Johnson Clothier Store occupied the Gideon building from the mid-1970s until the late 1980s. Touma Real Esate Holdings, LLC renovated the Gideon Building in the early 1990s, and removed the wood veneer that covered the windows; the Gideon Building is now known as the Town Center Plaza.