At the heart of the UNC Charlotte campus, J. Murrey Atkins Library is one of the largest research libraries in the state with a permanent staff of about 90. It offers over 3.8 million volumes, including 1.2 million e-books and 222,000 (mainly electronic) journals. The building comprises 285,000 square feet. Services include research and publishing support, library instruction, technology to enhance learning and scholarship, and the preservation of local and campus history. The library welcomes 1.5 million visits per year.

Atkins Library, its collections, and many events are open to the public. The first floor atrium features exhibits as well as busts of the university’s founder, Bonnie Cone, and each of the chancellors who have completed their service. On the tenth floor, extensive archives document the history of the university and the Charlotte region, and visitors can also enjoy a panoramic view that includes Uptown Charlotte to the southwest and Charlotte Motor Speedway to the northeast. 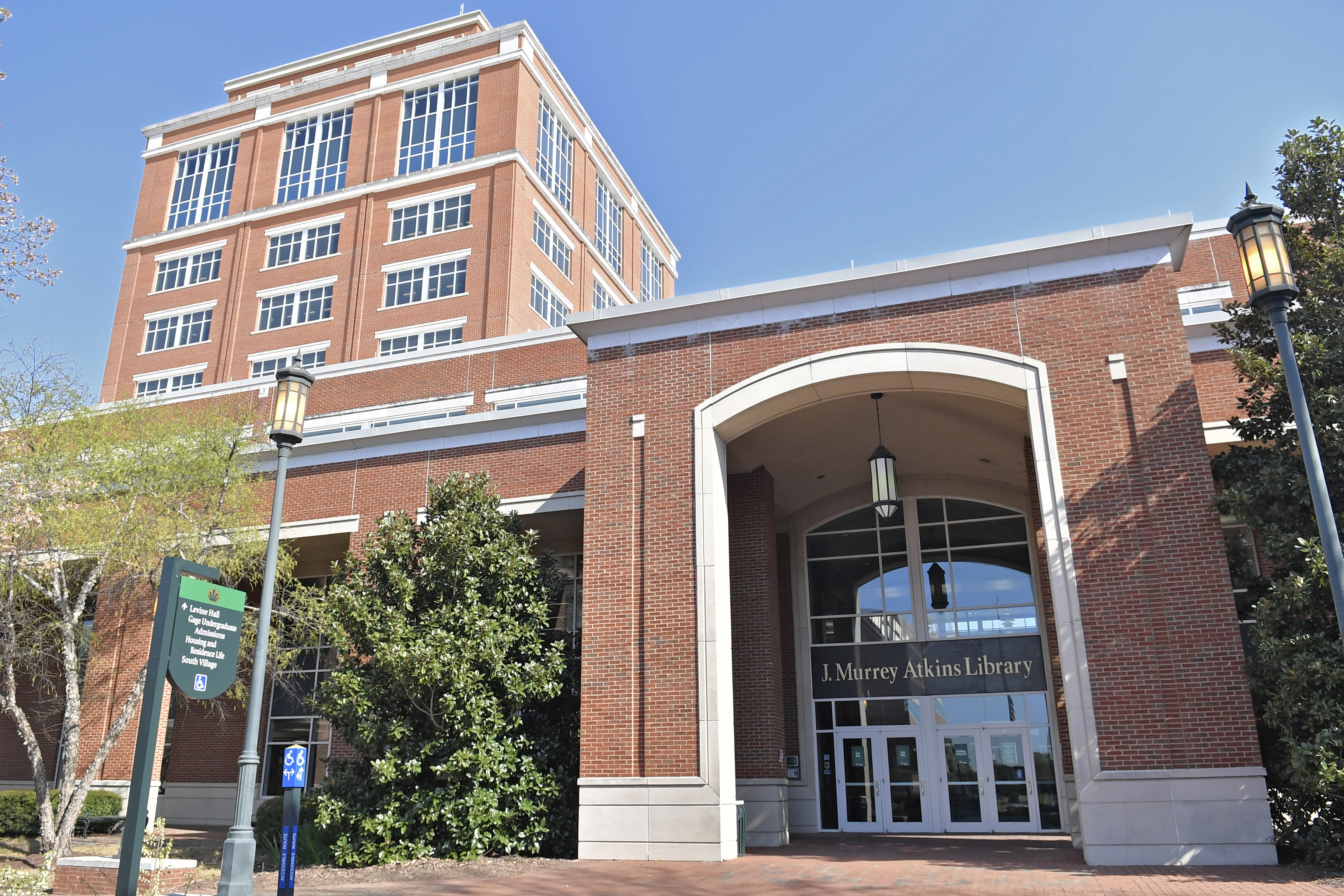 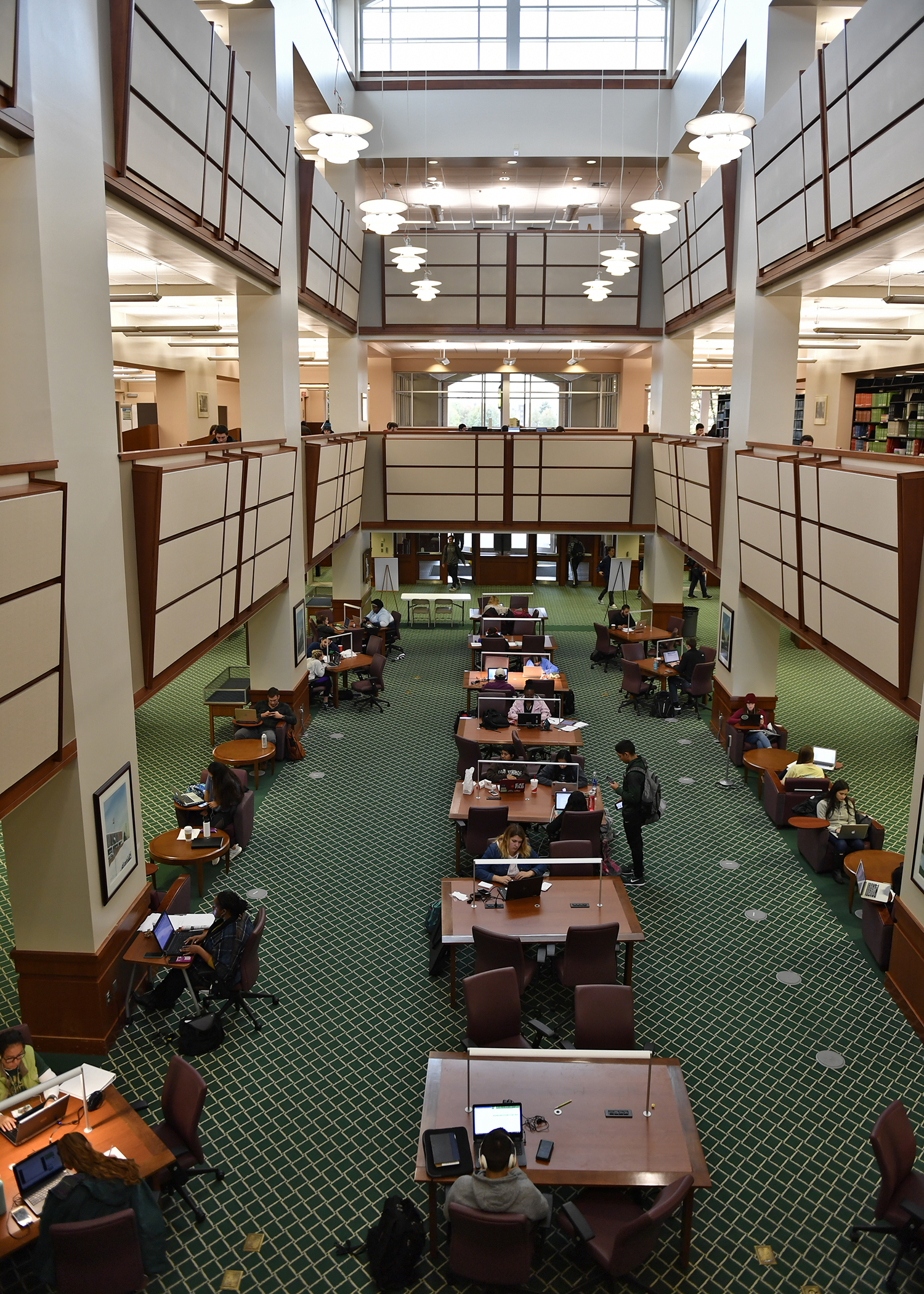 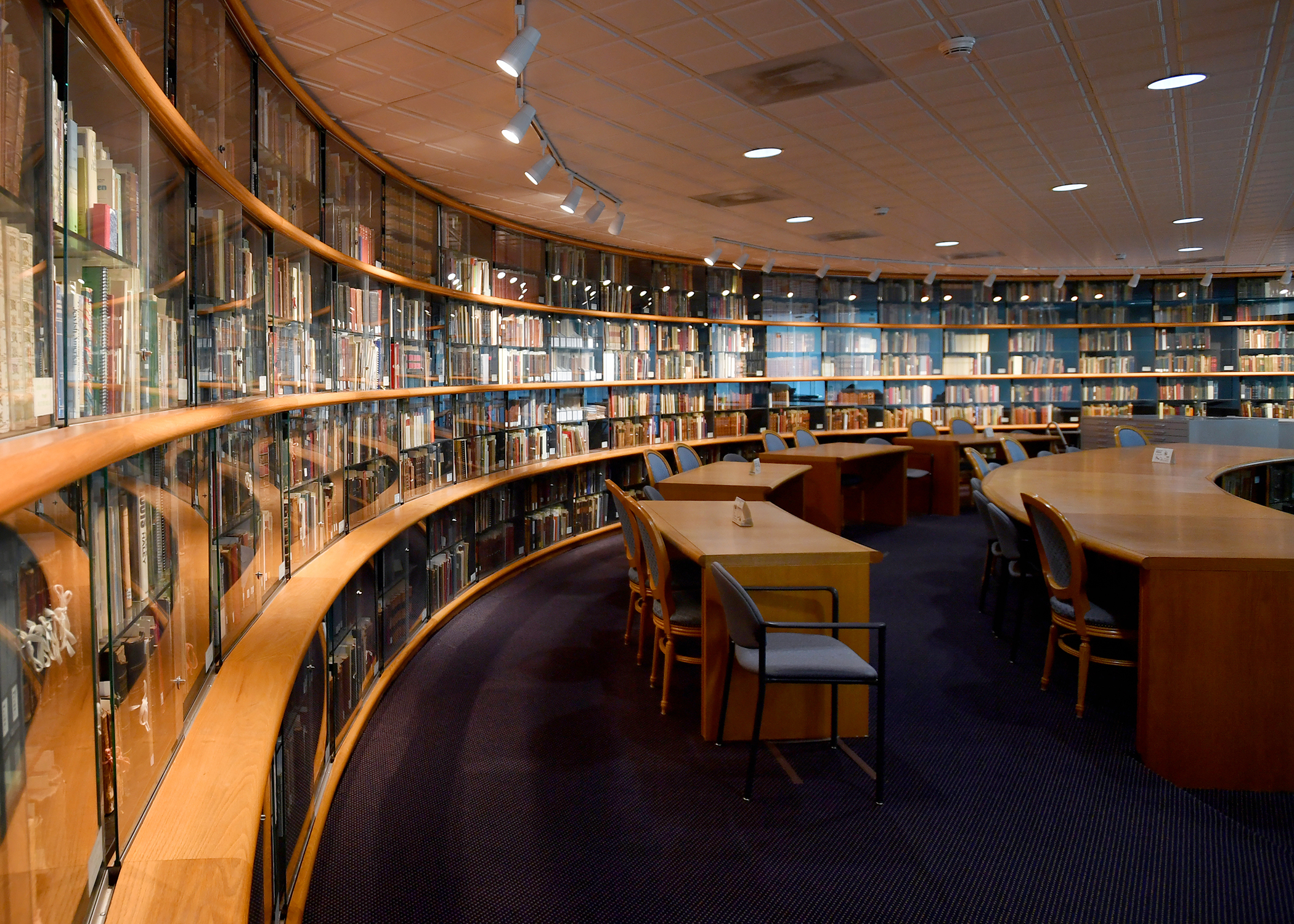 Atkins Library, completed in 1963, was one of about eight buildings included in the original master plan for the new Charlotte College campus site, which had opened two years earlier. In 1965, two years after the death of James Murrey Atkins, the university officially named the library to honor the prominent businessman. He was a central figure in Charlotte’s civic life who was instrumental in the founding of Charlotte College, which became the fourth campus in the University of North Carolina system in 1965. As the first chair of the college’s board of trustees, Atkins worked alongside Bonnie Cone to gain community and government support for the institution.

Within a few years Atkins Library required a major expansion. In 1971, the building added a ten-story tower named for Harry Lee Dalton, a Charlotte business leader who was one of the university’s most devoted patrons. Along with his wife, Mary, he expanded the library’s collections with gifts of books from his personal collection as well as money. These donations stimulated the development of Special Collections, and in 1983 the Mary and Harry L. Dalton Rare Book and Manuscript Reading Room opened on the tenth floor. To mark the occasion, the Daltons donated a copy of Phillis Wheatley's Poems, published in 1773.

By the mid-1990s, the library was again bursting at the seams, unable to accommodate its collection of 600,000 volumes and a student enrollment of more than 15,000. With a major allocation from the state legislature, the library added 110,000 square feet. The renovation included wiring for electronic information access, coinciding with the completion of the conversion of the card catalog to an online system, as well as 1,200 computer workstations. A three-story atrium was also added. In 2000, the reading room on the first floor was renovated and renamed in honor of businesswoman and university benefactor Dale F. Halton. The Halton Room is used for events as well as student study.

In 2005, the Dalton Tower was recladded in brick, replacing an earlier unsuccessful recladding. That same year, a cafe was added on the ground level, but it was not until 2012 that the library opened a new north entrance on that floor. Soon thereafter a major renovation of the entire ground level was unveiled, adding 5,000 square feet for technology-enhanced rooms and moveable furniture to facilitate new collaborative modes of studying.

In 2018, a new suite of technology spaces and services was added on the second floor. Known as Area 49, it comprises a makerspace, EZ video studio, visualization lab, teaching lab, multimedia lab, gaming lab, photogrammetry lab, and technology support desk. In 2019, NinerCommons, a set of services for the hosting and preservation of campus scholarship, was launched. The library opened a new storage facility in 2021 and relocated most of the periodicals collection and 70 percent of the print collection to it, enhancing services as needed to ensure timely delivery of requested materials. The objective was to gain space for additional seating to help accommodate the rising demand brought on by increasing enrollment, which exceeded 30,000 in Fall 2020.

As the library’s collection has grown over the years, generous benefactors have donated to the rare book collection to celebrate the milestone. In 1969, the library's 100,000th volume was donated by Mrs. Mary Myers Dwelle, a copy of The Historie of the World: in Five Bookes by Sir Walter Raleigh, printed in 1628. The library acquired its 500,000th volume in 1991 when the Daltons donated a rare first American edition of Moby Dick by Herman Melville. In 2007, the library added its one-millionth volume: a 1922 first edition, first pressing, copy of T.S. Eliot's The Waste Land, donated by Professor of English Julian Mason and his wife Elsie. The Masons also donated the two millionth volume in 2016, a rare sixth edition of Olaudah Equiano's Interesting Narrative of the Life of Olaudah Equiano, published in 1793.

“The Re-Dedication of J. Murrey Atkins Library, The University of North Carolina at Charlotte.” Program. April 25, 2001. Reference file: Buildings--Atkins Library [UA0422? -- need to find correct citation for boxes behind the desk in the RR]