New York's Manhassat Apartments were constructed in 1899. The Beaux Arts style building features a distinctive French mansard slate roof and is home to numerous apartments, and in 1910, the building was modified to include commercial spaces on the street level on the side of the building facing Broadway. The Manhassat Apartments is a New York City landmark and contributes to the Broadway-Riverside Drive Historic District. The apartments are near the north end of the Bloomingdale neighborhood/ south end of the Morningside Heights neighborhood and historic district. The building is still a residential co-op with commercial spaces along Broadway.

Manhassat Apartments building along west side of Broadway in 1983, view from corner with W 109th St. (NYLC) 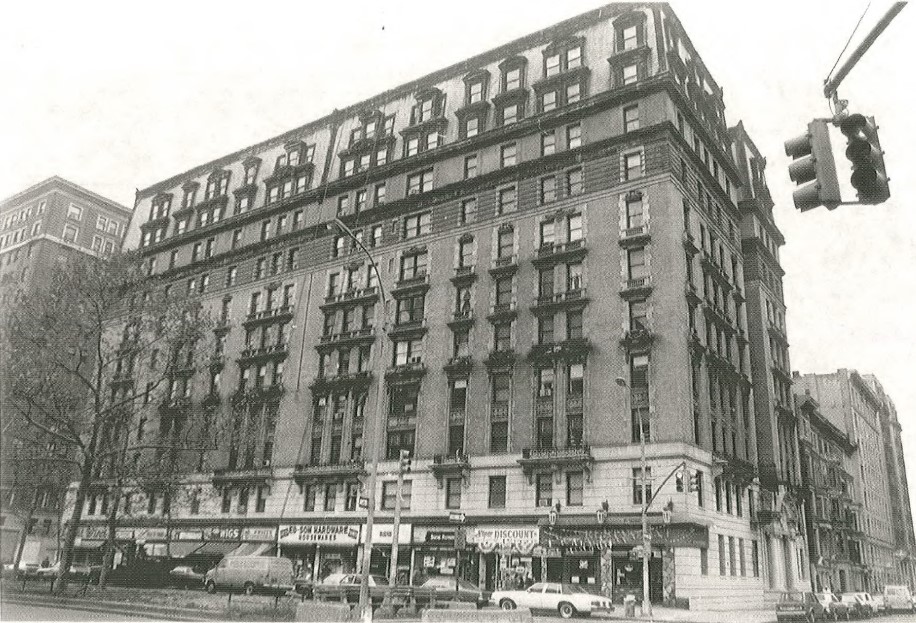 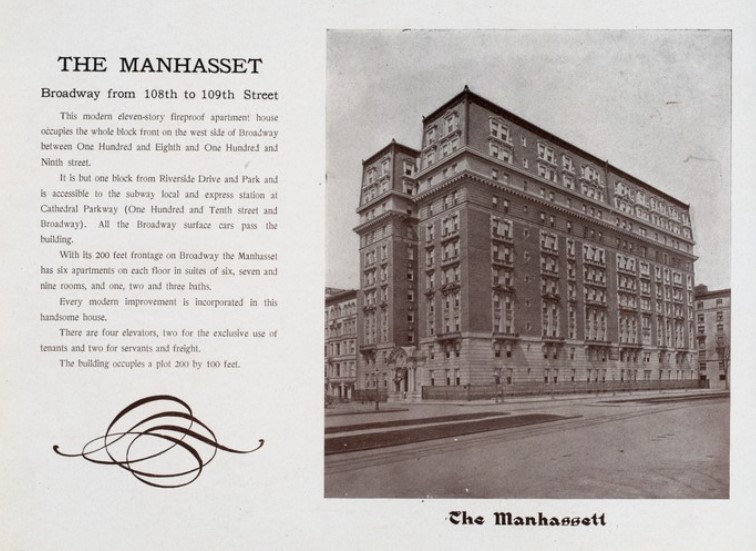 Typical floor plans of the Manhasset in 1910 NYC apartments guidebook (The World p. 77) 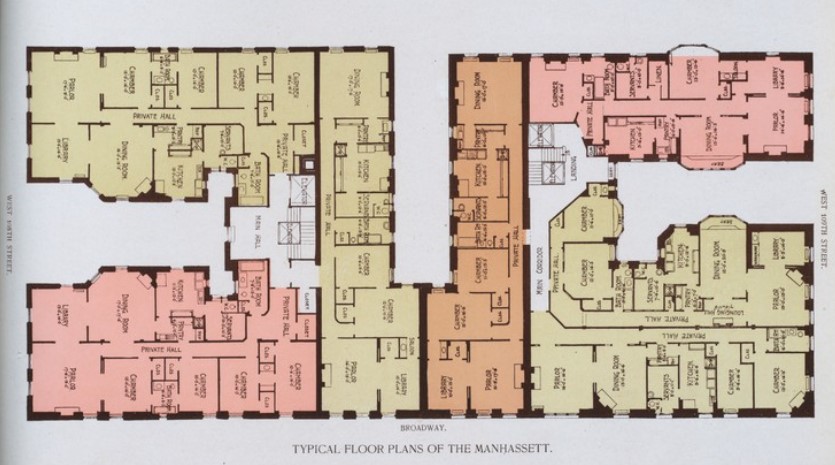 John W. Noble Jr. purchased the lots to build the Manhasset Apartments in 1899 from Jacob D. Butler. Noble was the brother of real estate developer William Noble; the pair joined forces as William Noble & Company and hired architect Joseph Wolf. The original plans were for an eight-story building in two sections topped with a cornice. The building's two entrances were at 301 W. 108th and 300 W. 109th Streets; four composite columns flank entries and support an arched pediment. The exterior is limestone, brick, and terra cotta. The Nobles were heavily in debt - they mortgaged half of the purchase from Butler - and filed for bankruptcy in 1899. Somehow they managed to keep building the luxury apartment building. Jacob D. Butler foreclosed on the mortgage and seized the new building in 1901. William Noble suffered a stroke and died in May 1902.

A 1910 guidebook to New York luxury apartments described the Manhasset as a modern eleven-story fireproof apartment house with every modern convenience. Two of the building's four elevators were reserved for tenants while the others were for servants or freight. Butler sold the property in 1910 for $3 million to Realty Assets Company; the street-level spaces along Broadway were then converted into 14 storefronts under the guidance of architect Clarence Shunway. This involved digging the building's foundations four feet deeper. The builders managed to keep the upper floors occupied by renters during all of this upheaval. The new owner of the Manhasset in 1919 was Frank N. Hoffstot, the Pressed Steel Car Company president. A later owner lost the building to bankruptcy in 1932.

The building was almost finished being renovated in 1999 when a fire started in a ground-floor restaurant and spread through the building. The Manhasset then contained 134 apartments with about half being rent-regulated and the other half as co-ops. Many residents were able to return to their apartments in three months; the more heavily-damaged north end took longer to be repaired.

Some of the recent tenants in the commercial spaces along Broadway include Creative Health, The Pet Market, La Mode Cleaners, and HearUSA.