Lajos Kossuth was born into a prominent family but came to believe that his homeland should become independent from the Hapsburg Monarchy. In 1847 Kossuth was elected to the national assembly, the Hungarian Diet. The following year, Kosuth became one of the primary leaders of the Hungarian Revolution which seized power from the ruling monarchs. The following year, the Austrian's nephew Franz Joseph formed an alliance with Russia. The Russian army crushed the newly-independent Hungarian government in 1849. Facing a certain death sentence if he was captured, Lajos Kossuth fled Hungary. Rather than abandon his cause, he toured Europe and the United States in search of supporters. Kossuth arrived in New York in December, 1851 and toured the US for seven months. Although Kossuth was welcomed by enthusiastic crowds along the East Coast, enthusiasm for his cause dwindled quickly. in 1927, Hungarian-American Gezo Barko launched a campaign to create a monument to Kossuth that was enthusiastically supported by Hungarian immigrants.

In this 1852 American political cartoon, Kossuth is pictured rescuing the Goddess of Liberty from the demonic forces of the Hapsburg Empire and its Catholic monarch. Notice the American cheering for Kossuth in the background, demonstrating the connec 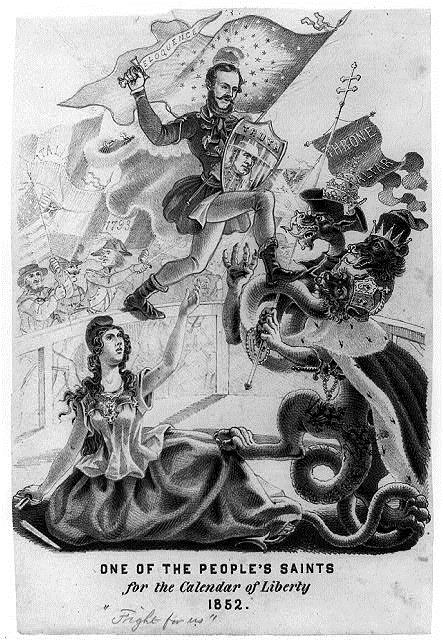 In the mid-19th century, revolutionaries in central Europe attempted to create independent states out of lands that were part of the Hapsburg Empire. Hungarian journalist and revolutionary leader Lajos Kossuth led one of these attempted revolutions. Although he failed, Kossuth became one of the most celebrated foreigners when he toured the United States in 1851 and 1852. Kossuth received a 100-gun salute upon his arrival in New Jersey. He also became the second foreigner to address a joint meeting of Congress. While the leaders of the United States strongly opposed the more radical ideas of European socialists, Kossuth was lauded for his support of both democracy and capitalism. From the perspective of American observers, Kossuth and other 19th century liberals were carrying the ideas of the American Revolution to Europe. In trying to create a homeland for his fellow Hungarians, Americans believed he was also fighting against the retrograde notion that kings had a “divine right” to rule over the people.

Like many leaders of America’s revolutionary generation, Kossuth was a brilliant writer and engaging public speaker. Dubbed the “noble Magyar,” Kossuth was cheered by American crowds who expected to hear about the Hungarian leader’s exploits against Catholic monarchs. Kossuth’s welcome soon wore thin as the rebel leader began to challenge Americans to do more to support the cause of freedom abroad and in their own nation. Non-intervention in European affairs had formed the bedrock of American foreign policy since the nation’s founding. Even more concerning for some political leaders, Kossuth’s doctrine of universal rights included a condemnation of slavery. Fillmore feared that Kossuth’s opposition to slavery and request for American intervention would divide the nation and embarrass his administration. As a result, the President withdrew Kossuth’s invitation to the White House and encouraged the Hungarian leader to return to Europe.

America’s shifting response to Kossuth demonstrated the nation’s lack of enthusiasm for some of the more radical ideas he represented. American socialists won few supporters in 1848 and their converts were generally ignored as the economy continued to prosper. Although socialists remained on the political margins in the United States, the revolutions of 1848 marked a significant turning point. With the publication of Marx’s Communist Manifesto, the idea of socialism and a growing sense of class consciousness began to win supporters around the globe.

1848 appears as a turning point where the leadership of Europe became more willing to consider liberal reforms to the political and economic system. Monarchs were more willing to acknowledge the right of parliaments to participate in lawmaking. Meanwhile, parliaments became more willing to permit middling men to participate in the political system. European reformers brought an end to the manorial system of land ownership—a system that had kept peasants in a state of perpetual dependency. In addition, nationalist movements set the stage for the eventual independence and unification of nations such as Germany and Italy.