Welcoming visitors to the Church Street Historic District, formerly the Georgetown and Cuba neighborhoods, is the Church Street Mural. At the corner of Church Street and Business Route 13, the vibrant mural completed in 2019 is accompanied by a small park, meant to serve “a resilient community which has historically been under-served.”[1] Designed and painted by Paul “Sketch” Boyd III with input from the local community and inspiration from Linda Duyer’s book "‘Round the Pond: Georgetown of Salisbury, Maryland," the Church Street Mural represents the rich Black history of Salisbury’s Georgetown neighborhood. The mural features Sgt. William Butler, Dr. Charles H. Chipman, Elaine Brown, James F. Stewart, and Dr. G. Herbert Sembly. Pictured in the foreground is a colorful passing train, depicting hope for future generations.

The completed Church Street Mural and accompanying park pictured in October 2021. (Photo by Allison B. Stancil) 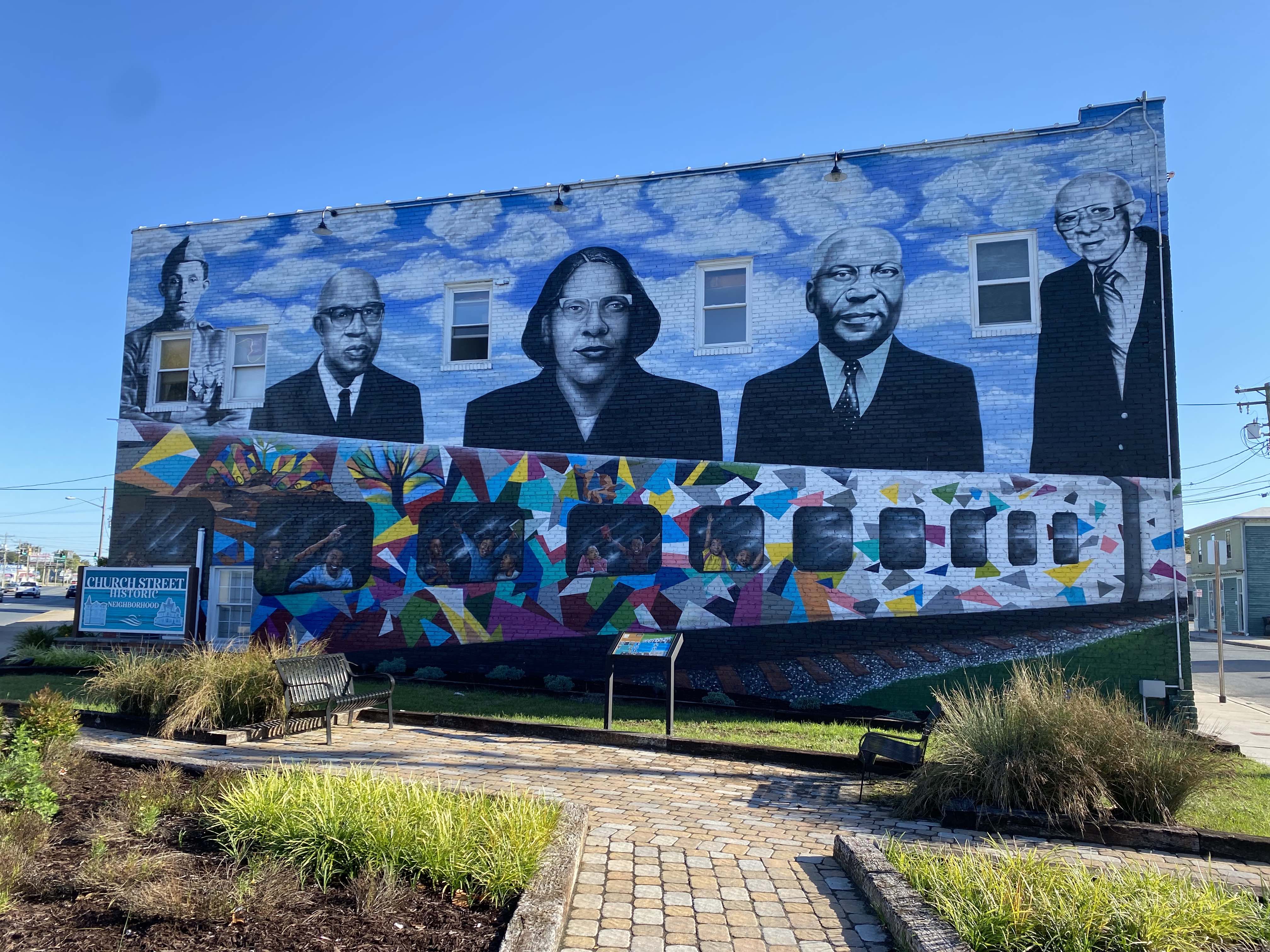 The historical marker at the Church Street Mural is pictured in October 2021. (Photo by Allison B. Stancil) 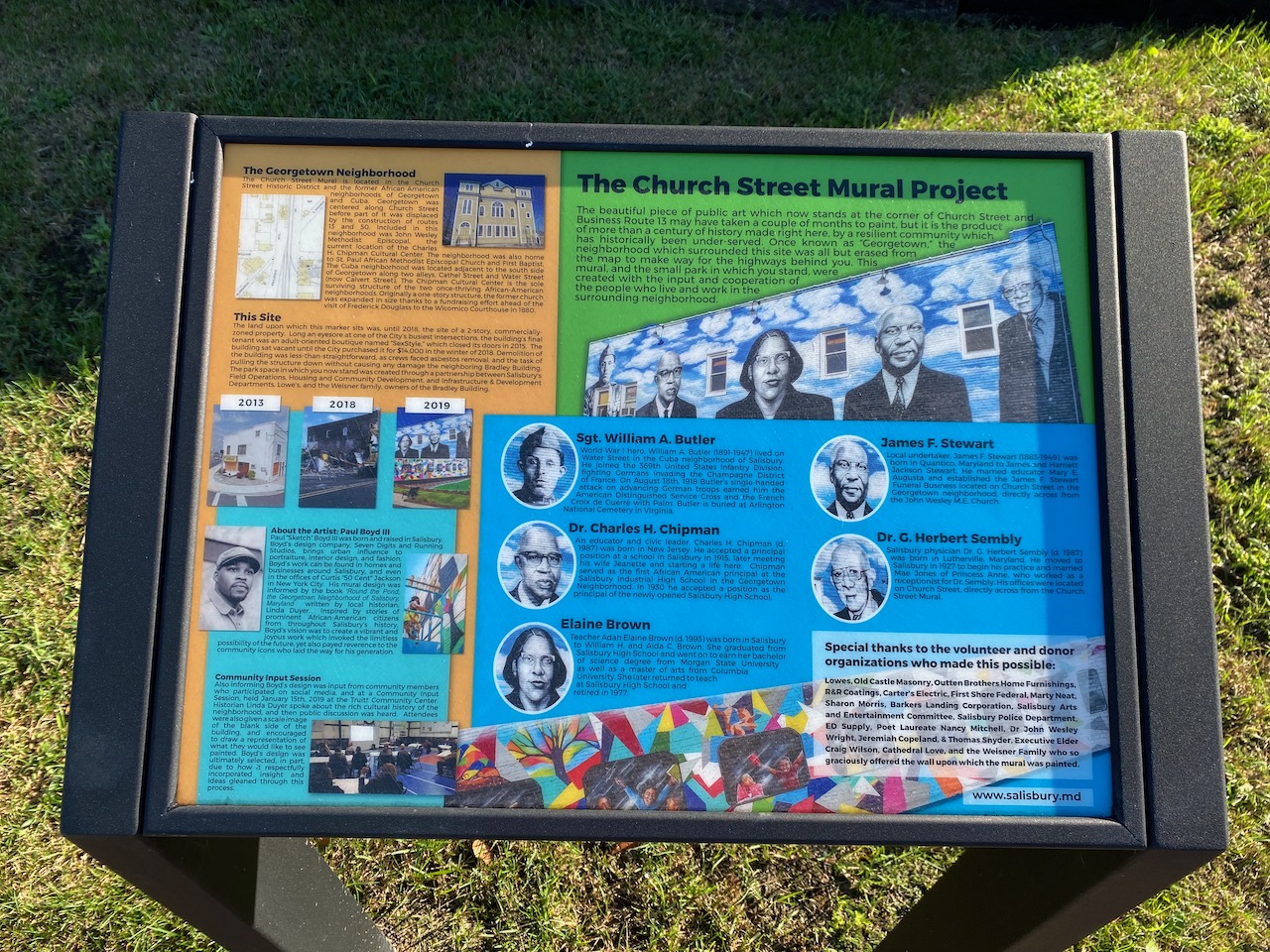 The location of the Church Street Mural at the corner of Route 13 and Church Street pictured circa the 1950's-1960's when it was Bailey Electrical Company. (Walter Thurston Photograph Collection 2016.096.623) 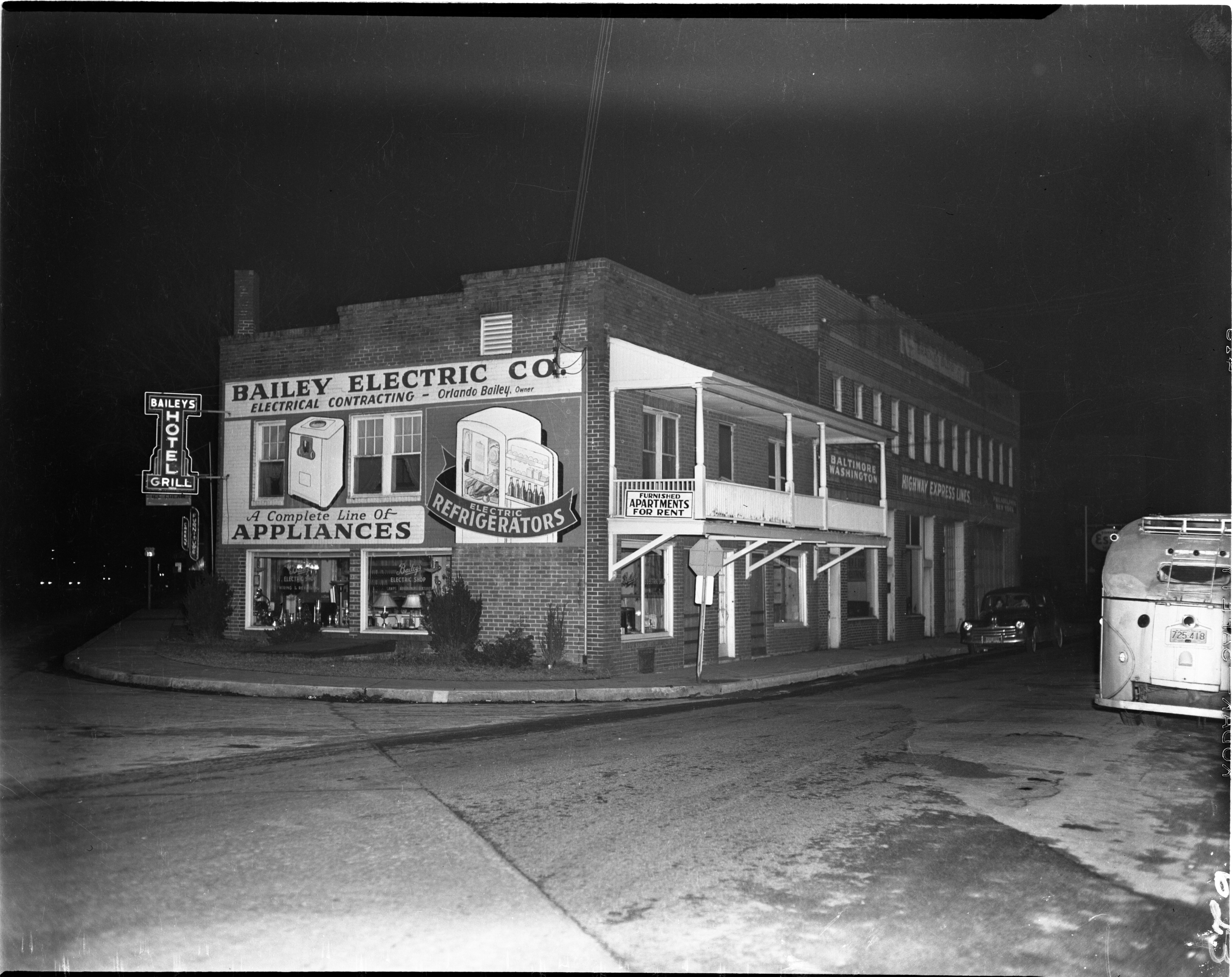 One of the mural design ideas from the community input sessions held to inform the final design. (City of Salisbury, Maryland) 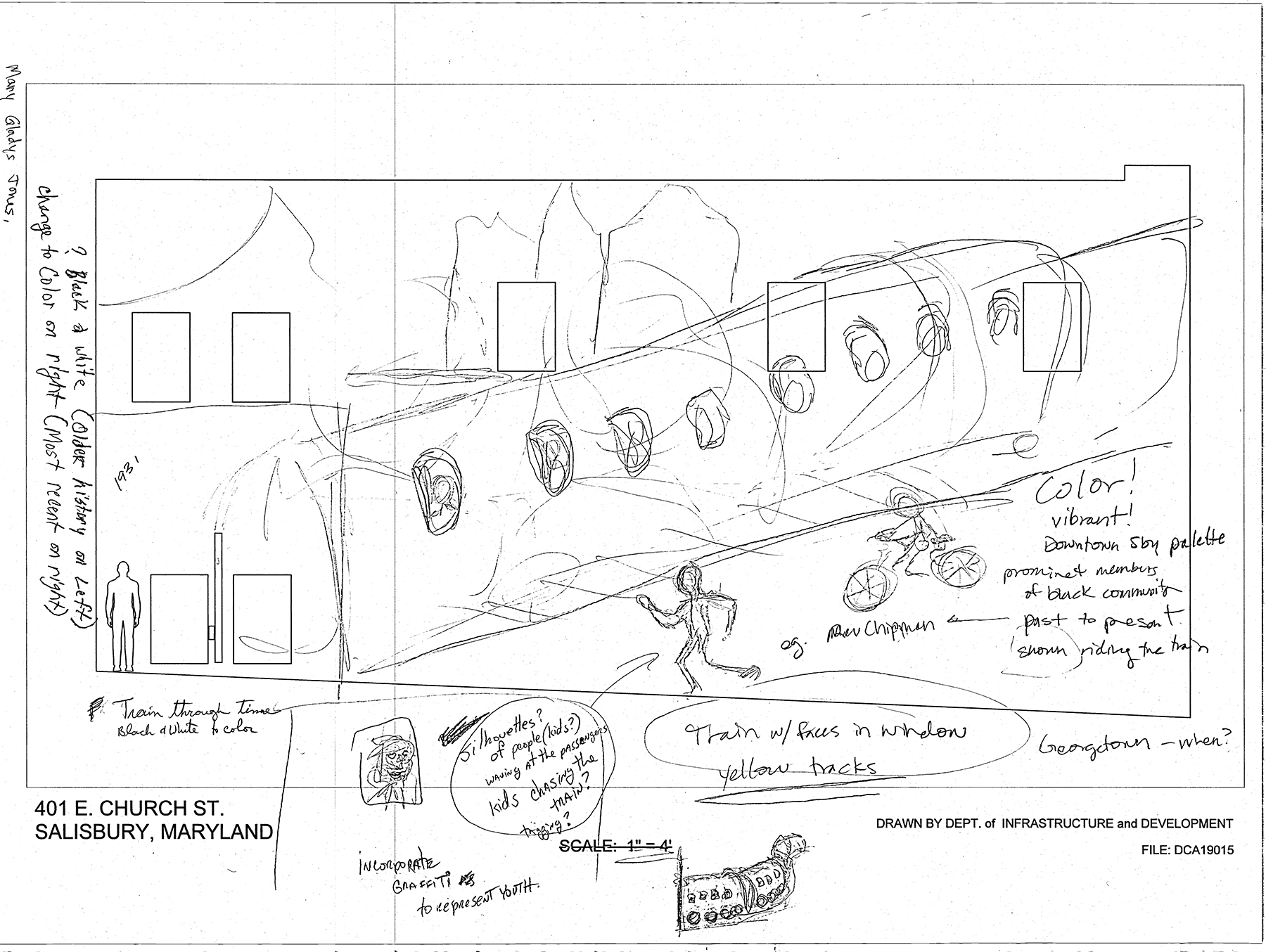 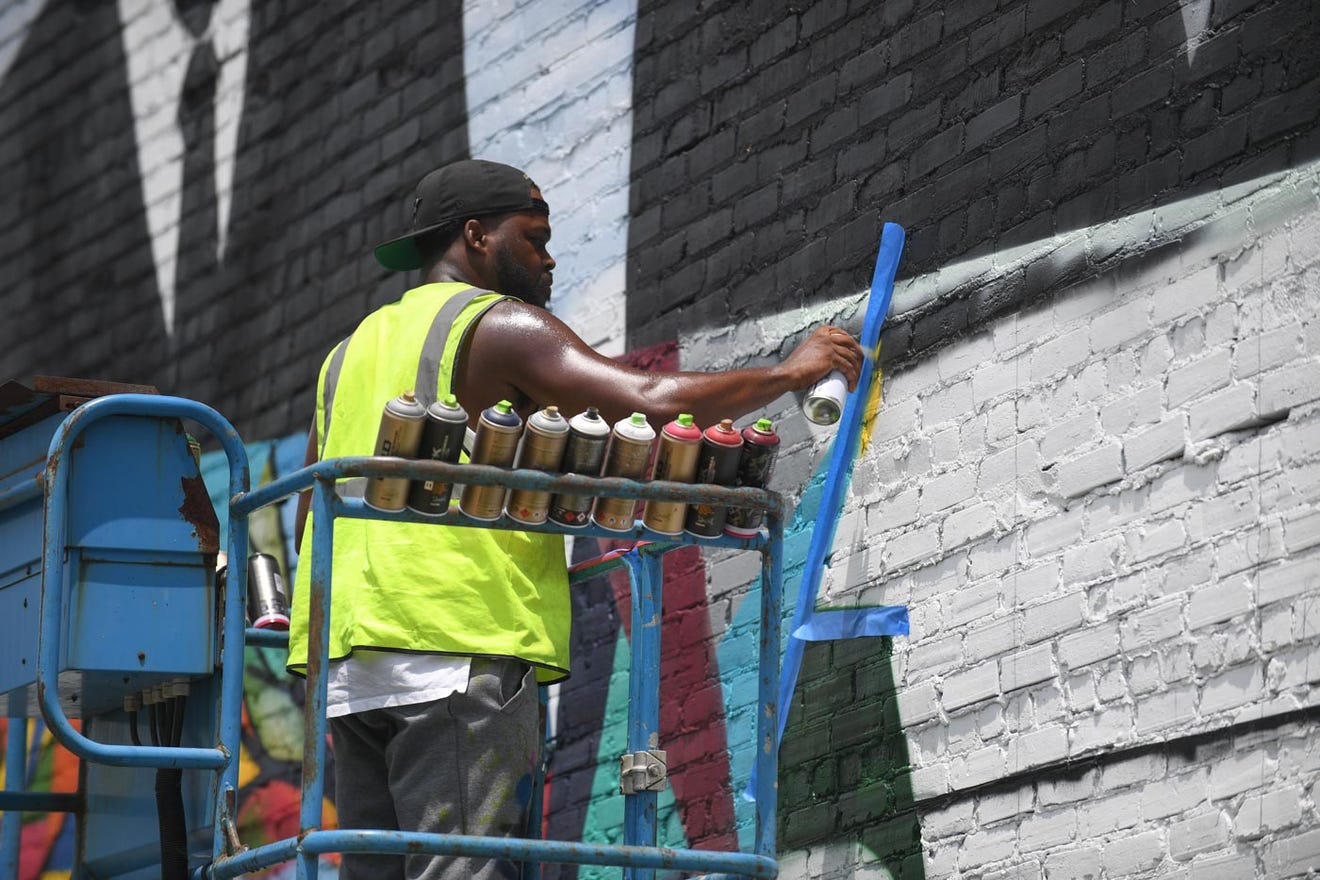 A visual celebration of Salisbury’s Georgetown and Cuba neighborhoods, the Church Street Mural and accompanying park was finished for passersby to enjoy in 2019. The project was made possible by removing a vacant building at the corner of the Church Street and Route 13 intersection and was a partnership between Salisbury’s Field Operations, Housing and Community Development, and Infrastructure & Development Departments; Lowe’s; and the Weisner family.[2] Design ideas from community members led the way for Paul “Sketch” Boyd III’s final lively design.

Born in 1881, Sgt. William A. Butler lived on Water Street in Salisbury’s Cuba neighborhood before becoming a decorated war hero following his service in World War I. Sgt. Butler fought in the 369th United States Infantry division called the “Old Fifteenth” and also known as the Harlem Hellfighters. When they returned to New York, the Harlem Hellfighters were prohibited from participating in the military parade and, instead, a separate welcoming parade was arranged, with Sgt. Butler as the first honoree. Sgt. Butler’s bravery while fighting German troops invading the Champagne District of France on August 18, 1918 earned him the American Distinguished Service Cross and the French Croix de Guerre with Palm. After the war, Butler returned to Georgetown with a special welcoming at the John Wesley Methodist Episcopal Church. Sadly, Butler took his own life in 1947 and is now buried in Arlington National Cemetery. Sgt. Butler was never awarded a Medal of Honor during his life due to his race, but after 100 years, the Harlem Hellfighters finally received the Congressional Gold Medal thanks to a bipartisan commendation approved in the summer of 2021.

From the time he arrived in Salisbury in 1915 until his passing in 1987, Dr. Charles H. Chipman strived to make Salisbury a better place. Chipman moved to Salisbury to become principal of Salisbury Industrial High School, or the “Warehouse” School, a segregated Black school located off E. Church Street. After a yearslong campaign begun in 1923, Chipman became the principal of Salisbury High School after its completion in 1930. Chipman presided over the National American Teachers Association, the Maryland Colored Teachers Association, and the Frontiers of America club, a Black service organization. He and his wife, Jeanette Pinkett Chipman, attended the John Wesley M.E. Church, and later purchased the property that is now operated by the Chipman Foundation as the Charles H. Chipman Cultural Center. For his efforts to make Salisbury a better place, Chipman was awarded the Salisbury Award in 1961, and Charles H. Chipman Elementary School, located on the site of the former Salisbury High School, was named after him.

Born in 1913, Adah “Elaine” Brown grew up on 2nd Street in the California neighborhood, learning and experiencing life in Salisbury’s segregated communities and businesses. Her great-grandfather, Reverend Frost Pollitt, was the first preacher of John Wesley M.E. Church, and her father, William Handy Brown, was a songwriter and vocalist who worked as a waiter at the Wicomico Hotel. Her mother was a seamstress at Conolly’s, originally on Church Street. Brown was part of the last class that attended the “Warehouse” school. She graduated from Morgan State University and returned to teach at the new Salisbury High School building in 1934. Brown earned a Master of Arts from Columbia University and served on the Board of Directors for the Chipman Foundation. The book “‘Round the Pond” is dedicated to Brown. Author Linda Duyer writes, “Her passion, enthusiasm and efforts to make this happen inspired me every step of the way.”[3]

Previously located across the street from the John Wesley M.E. Church, James F. Stewart’s Funeral Home served the Black communities of Salisbury. A biography of Stewart credits the undertaker with “always [endeavoring] to render a reliable and conscientious service to the people of this section, and the splendid patronage he enjoys is sufficient evidence of the confidence and esteem in which he is held.”[4] Stewart studied his trade at Eckels College of Embalming and shortly after opened his funeral home on Church Street followed by funeral homes in Berlin, Easton, and Pocomoke City. He is known to have prepared Salisbury Courthouse lynching victim Matthew Williams’ body for burial in “a velvety coffin of steel grey, with silver handles,” taking the utmost care to respect in death a community member who had been so brutally murdered in life.[5] Stewart took part in many local civic and charitable organizations in the community. After Stewart’s death in 1949, his widow Mary A. Stewart took over the business with Thornton B. Jolley, who worked under the late Stewart. The business remains in the Jolley family today.

Dr. G. Herbert Sembly moved to Salisbury in 1927 to begin his medical practice, with offices directly across from the Church Street Mural. Born to Edward and Frances Sembly near Lutherville, Maryland in 1898, Dr. Sembly studied medicine at Howard University. Before moving to Salisbury, Dr. Sembly completed an internship at Tuskegee Institute in Alabama and was licensed in three states: Alabama, Maryland, and New York. In 1941, Dr. Sembly headed the Colored Citizens Drive for the Peninsula General Hospital, which campaigned for $1000 to renovate the hospital’s Black ward. The doctor also participated in local politics and ran as the Democratic candidate for the Salisbury City Council in 1952. Dr. Sembly practiced in Salisbury for more than sixty years and had additional offices in Snow Hill and Ocean City. Shortly before his passing in 1987, Dr. Sembly was honored by the Wicomico Medical Society.

[4] Linda Duyer and W.C. Thurston, “Biography--Business, Sketches of Pleasing Personalities in the City of Salisbury and Wicomico County,” in 'Round the Pond: Georgetown of Salisbury, Maryland: A History of the Georgetown and Cuba Neighborhood Communities Collectively Known as Georgetown (Salisbury, MD: Linda Duyer, 2007), p. 115.