Item 16 of 19
This is a contributing entry for Foggy Bottom Historic District Walking Tour and only appears as part of that tour.Learn More.

The 2400 block of K Street was once the most prosperous section of what is now the Historic District. No. 2422 is one of the Historic District's oldest, built in 1874. From the 1930s to 1950s, it served as "The Manila House," a gathering place for Filipino-Americans (as noted in the landmark designation plaque). The adjoining row houses (1885-1890) feature decorative iron stair risers and leaded stained glass windows. St. Paul's Parish Episcopalian Church has a long history, with its first church built on Washington Circle in 1866. The current church was built in 1948, when the George Washington University demolished its original building to build the (since relocated) GWU Hospital. 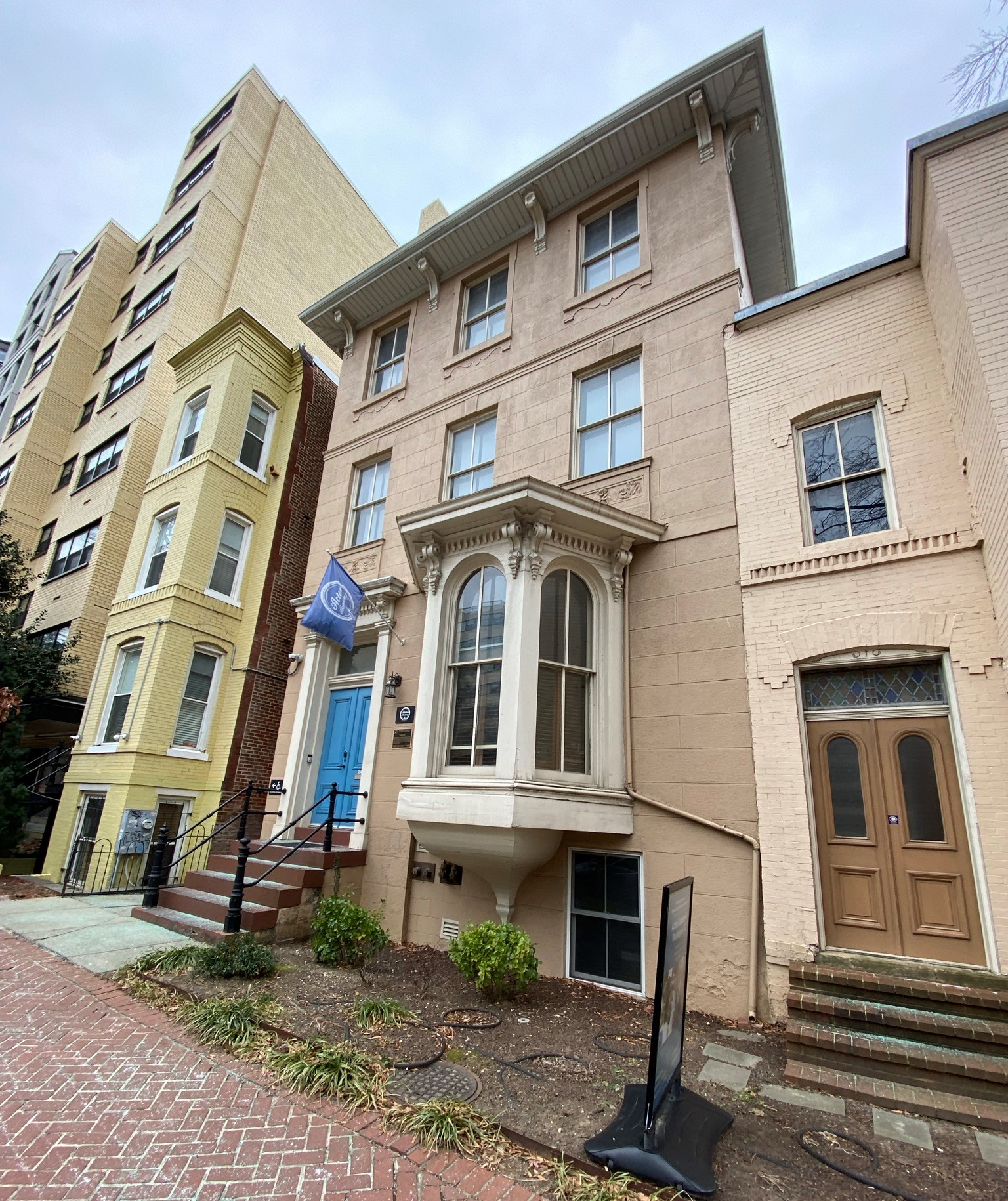 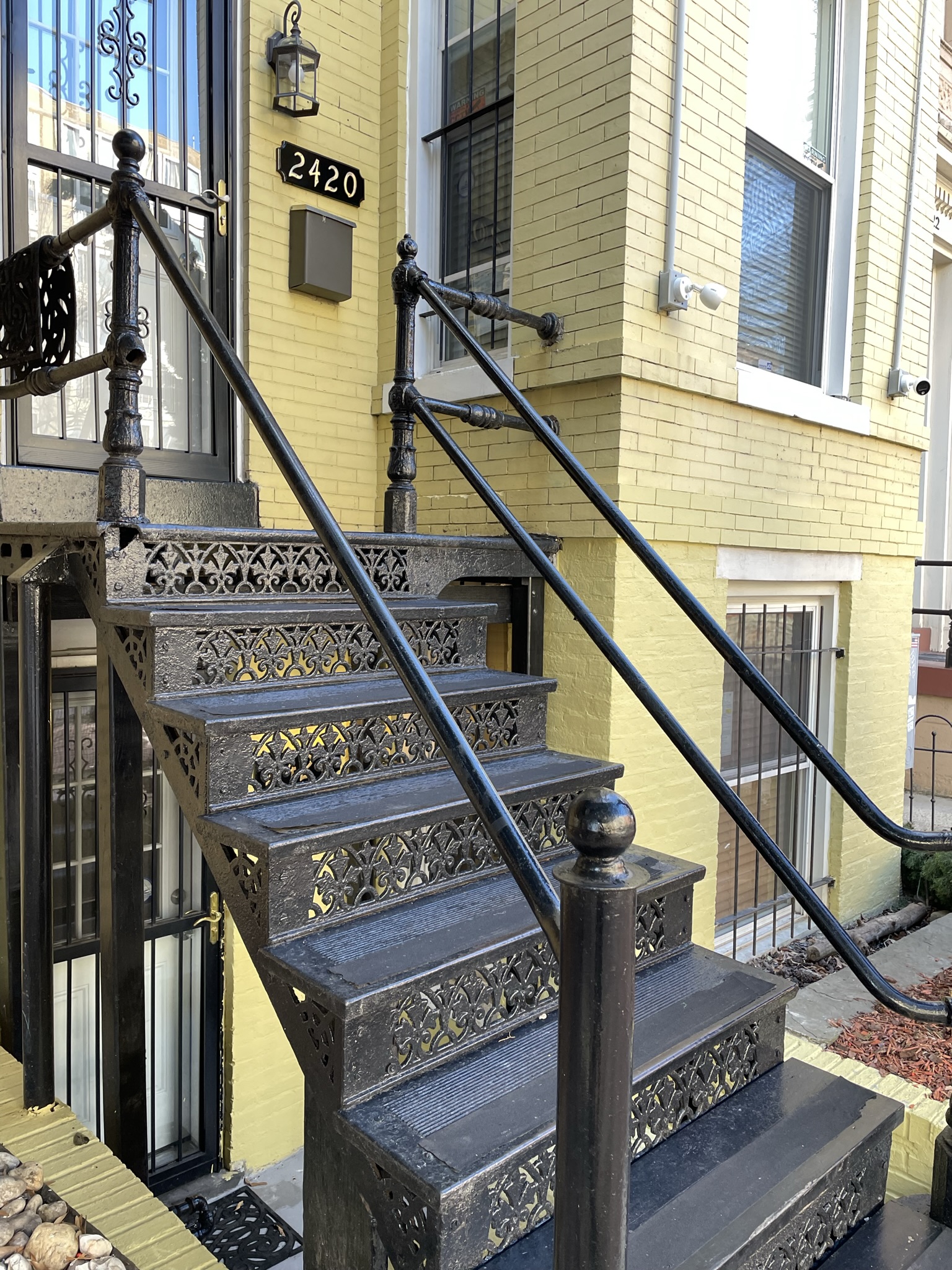 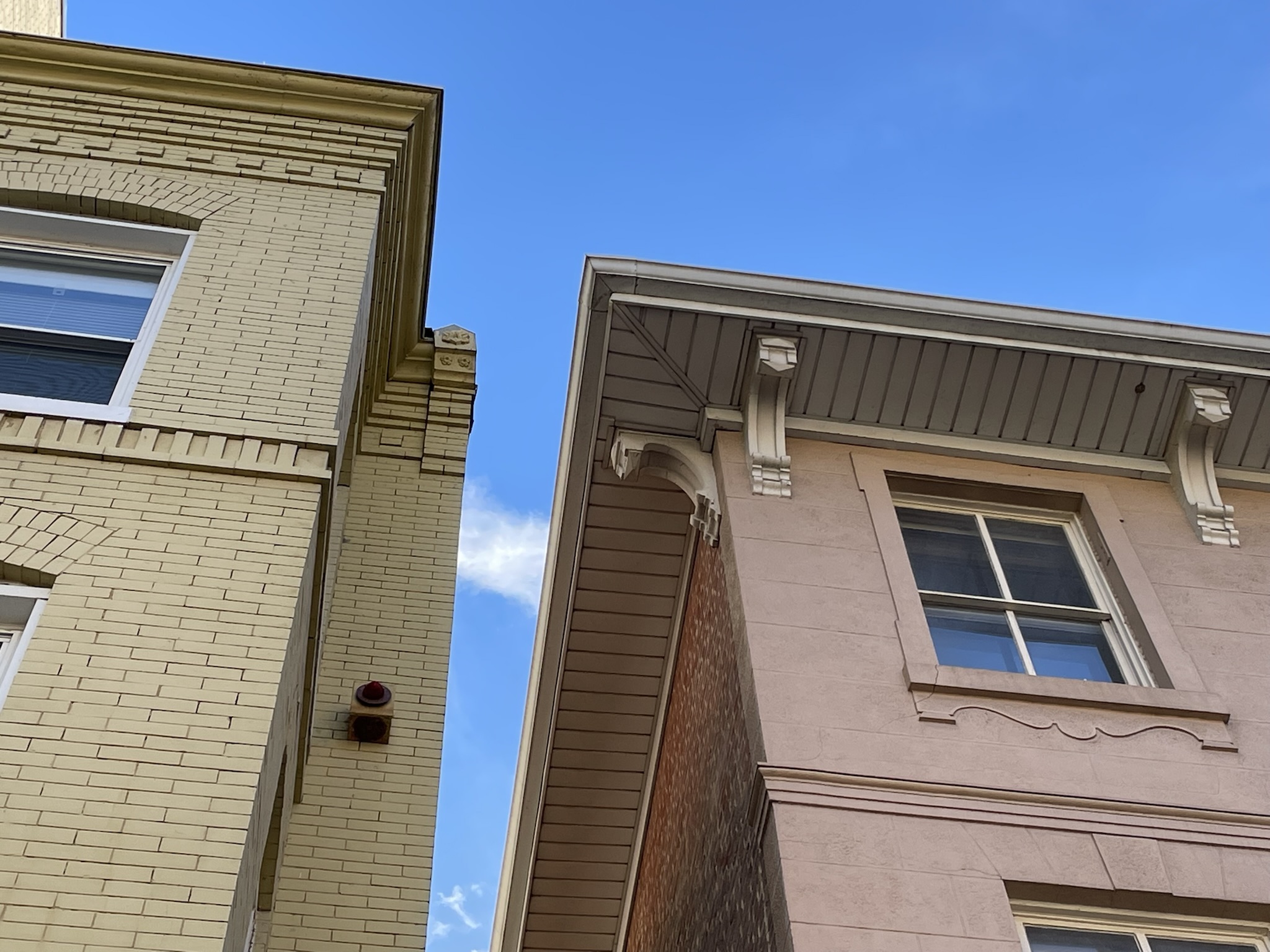 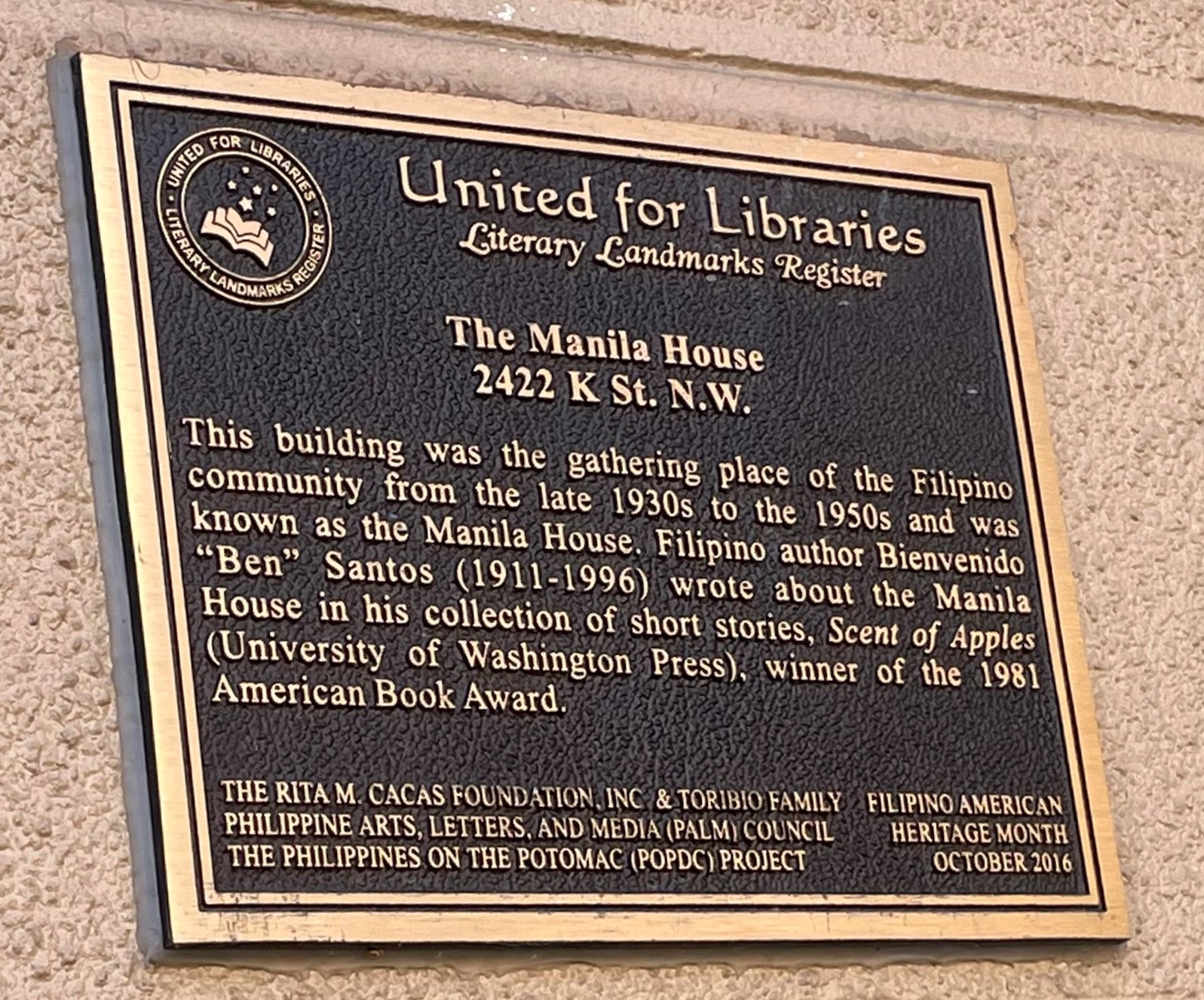 Juliana (center) and Rudolfo Panganiban (far right) with friends in front of the Manila House, 1944 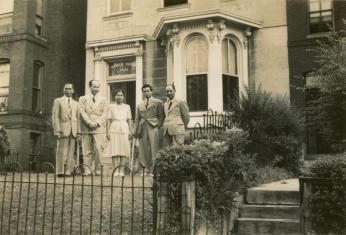 Cherubs and decorated door frame at the Manila House 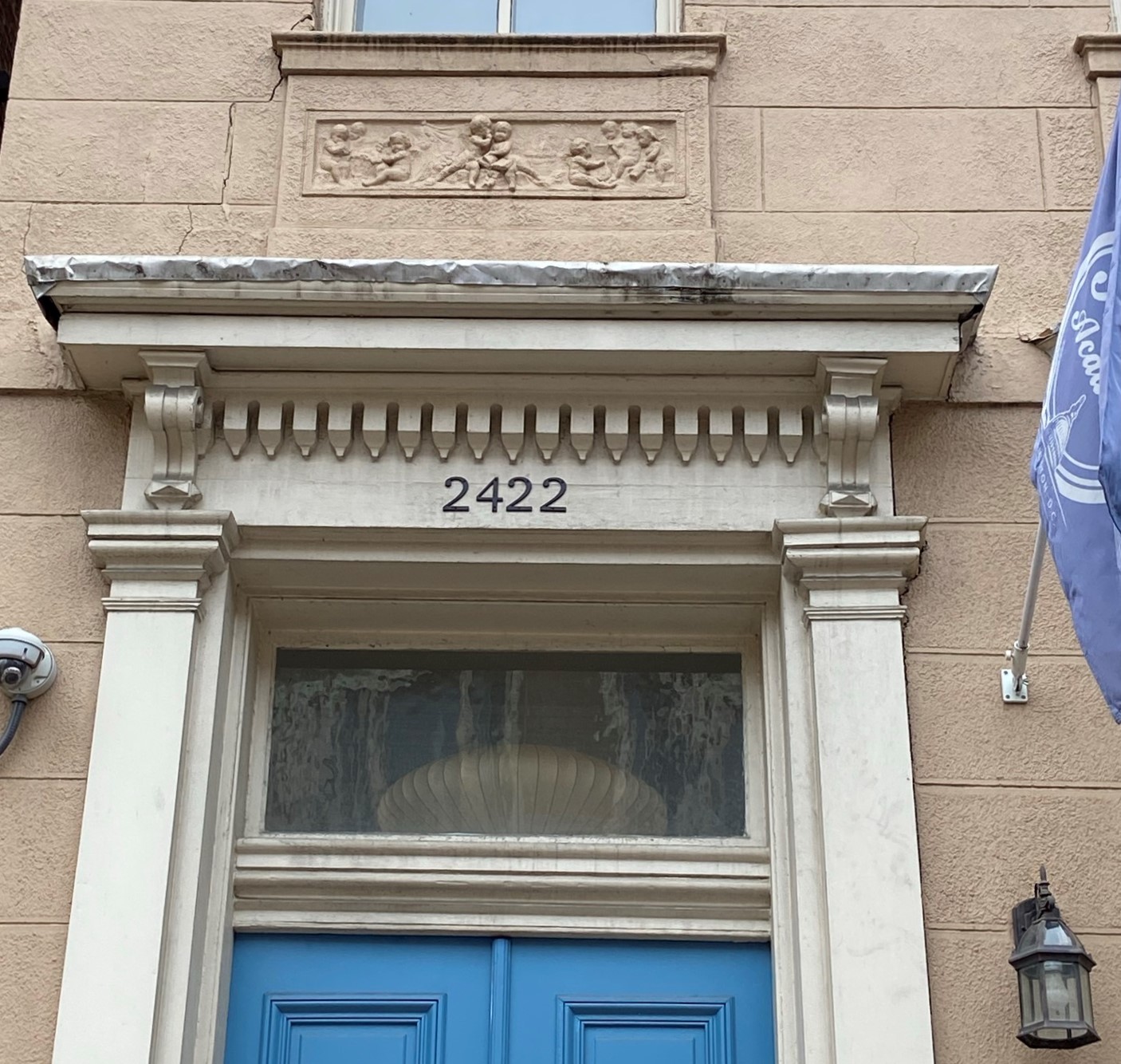 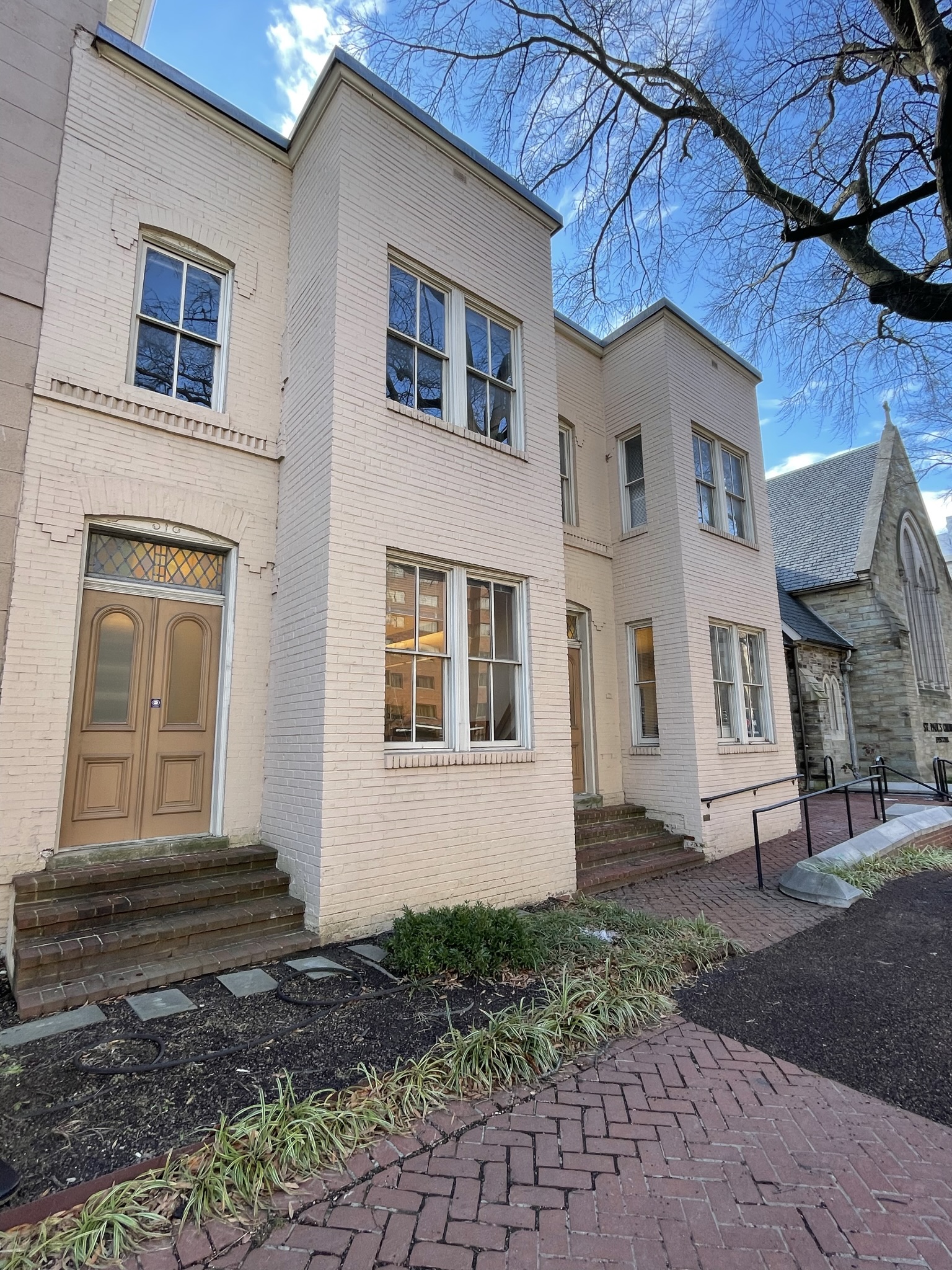 Drawing of the original St. Paul's Church at Washington Circle (b. 1868) 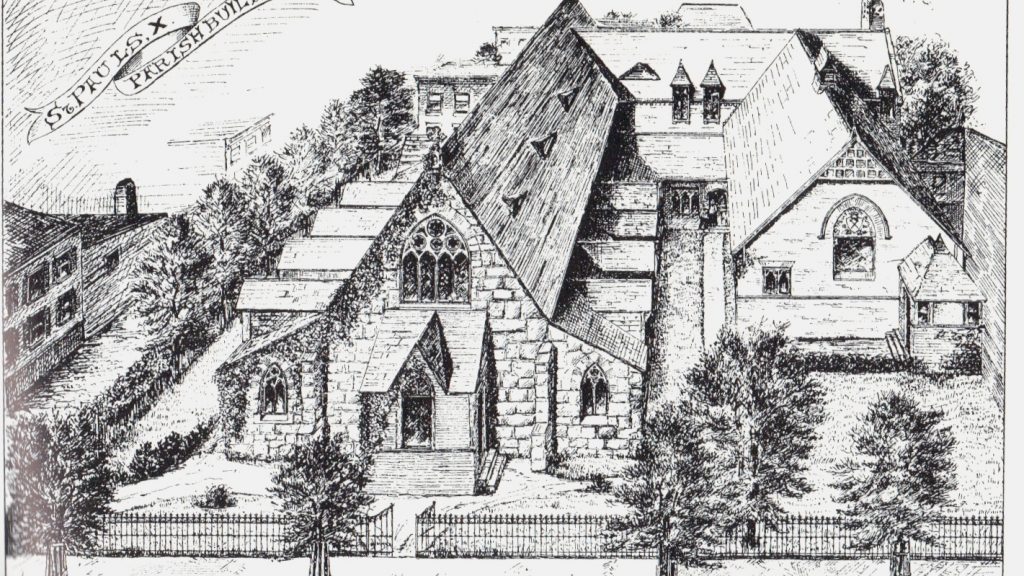 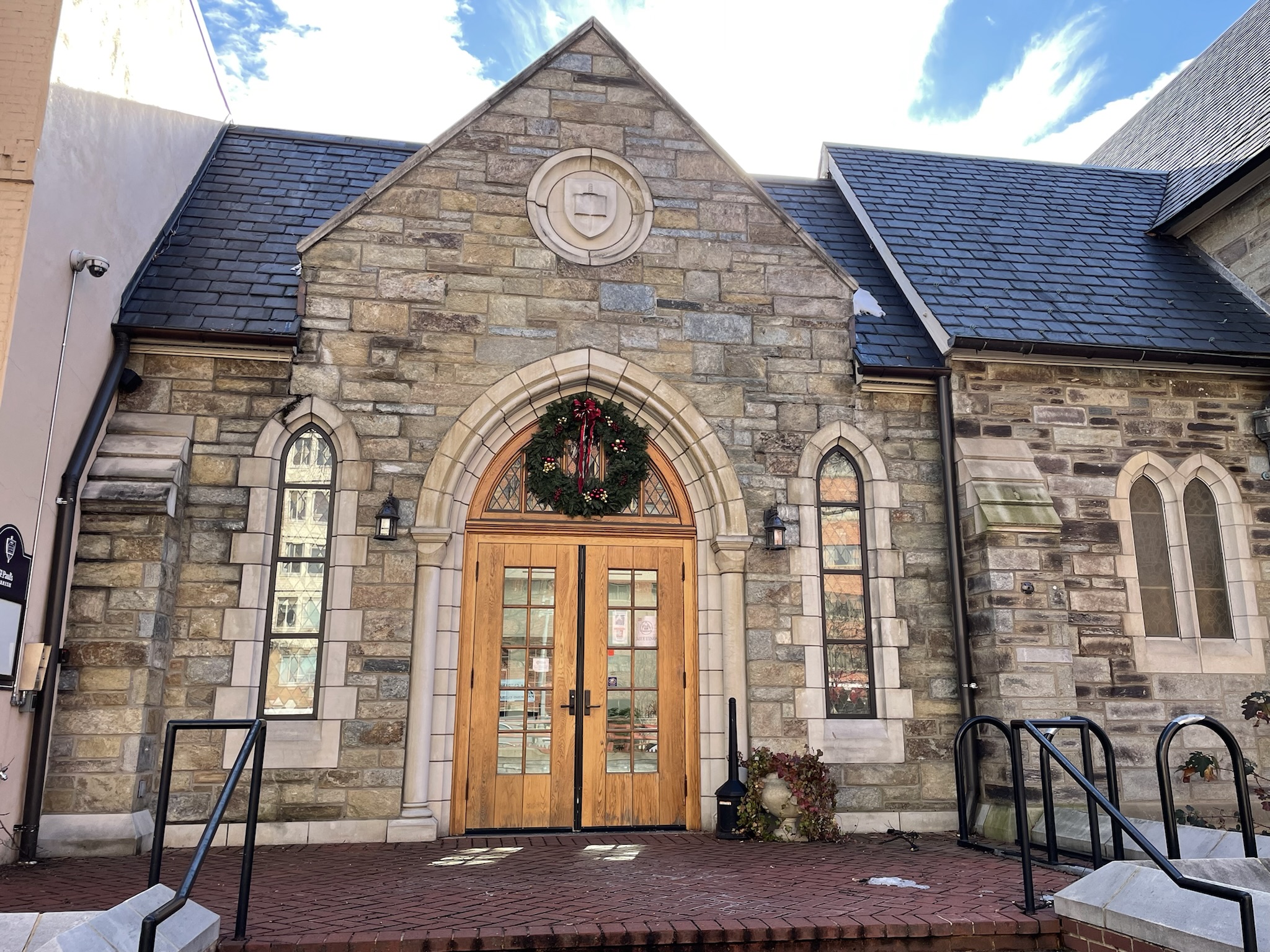 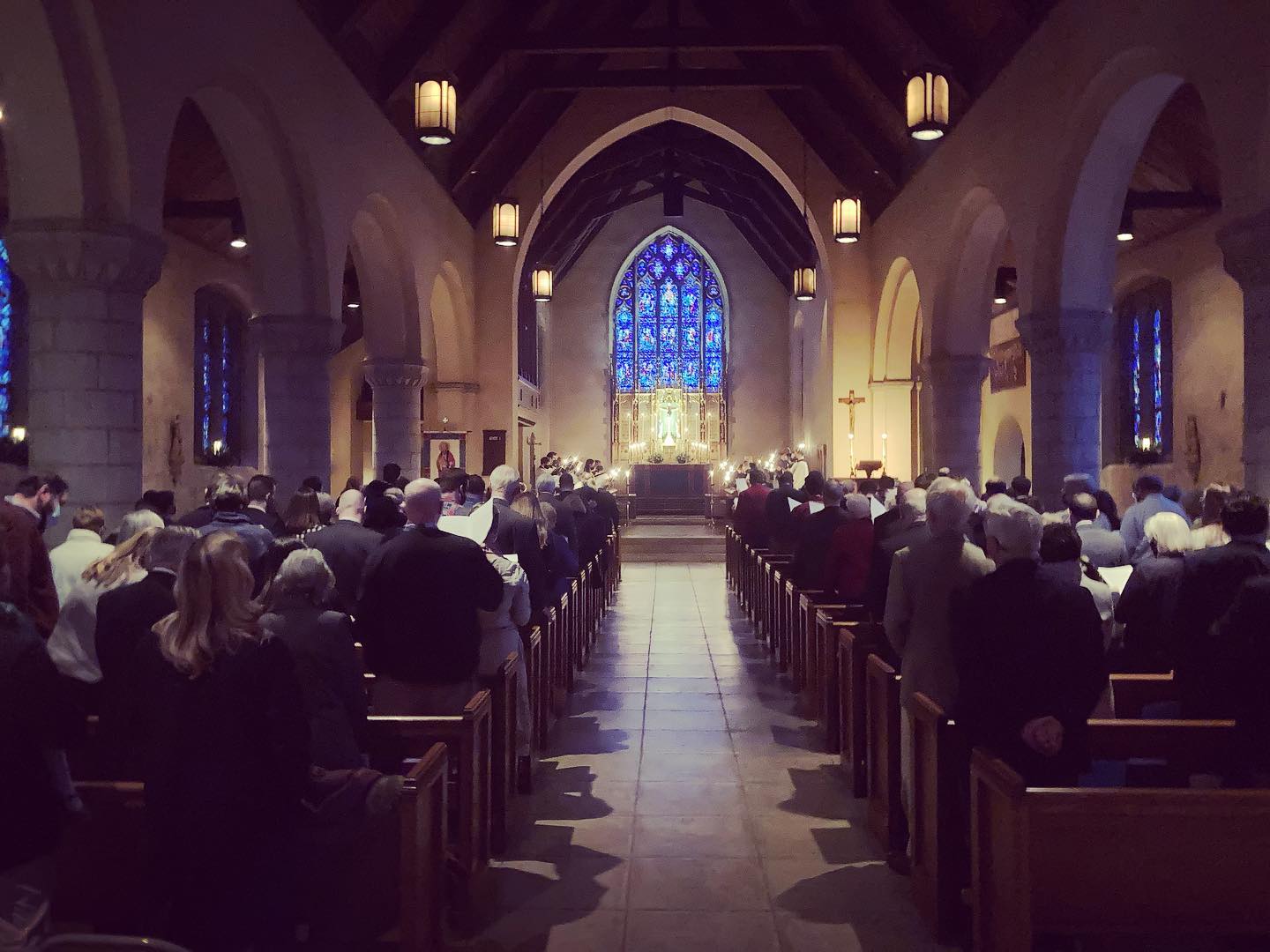 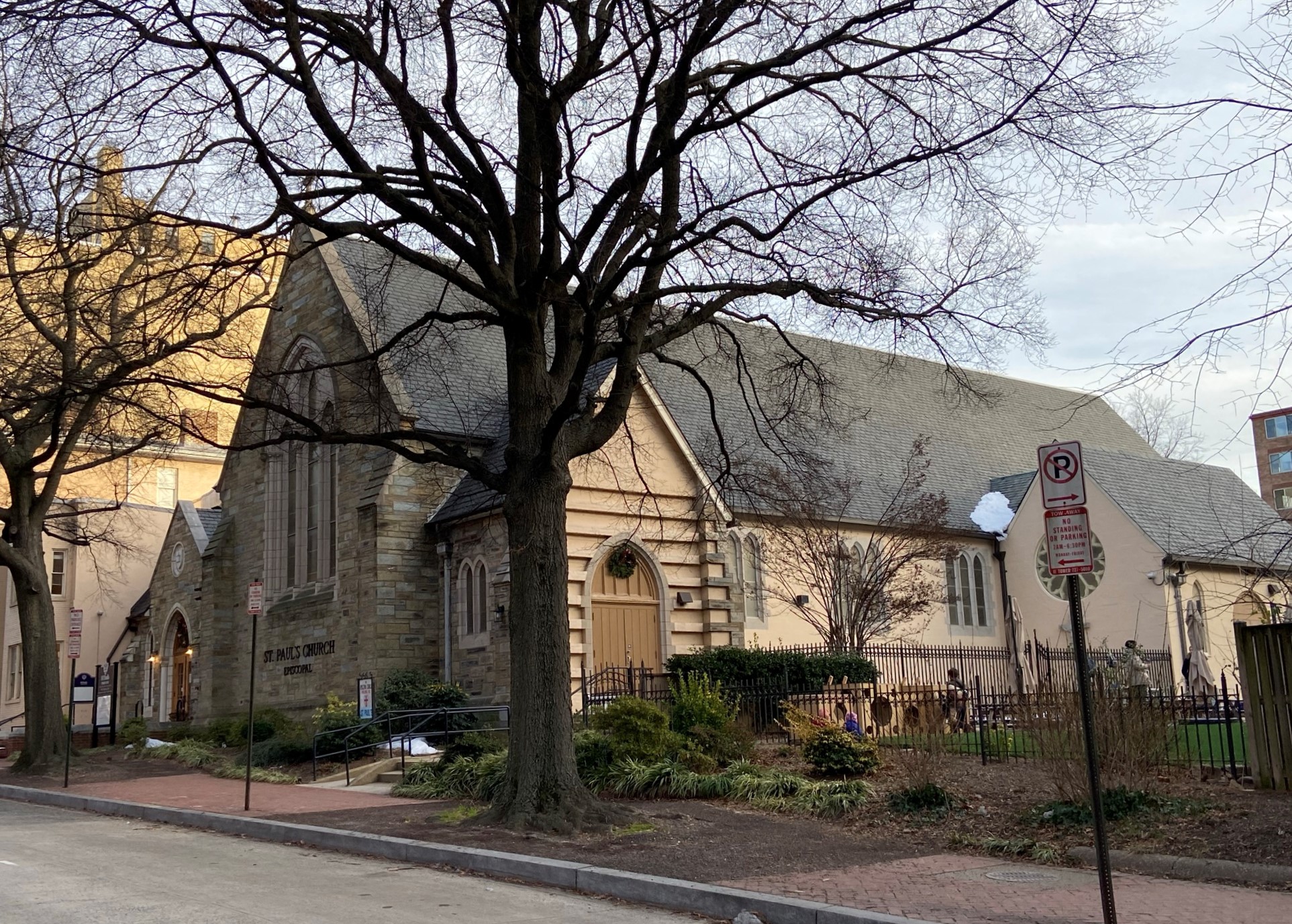 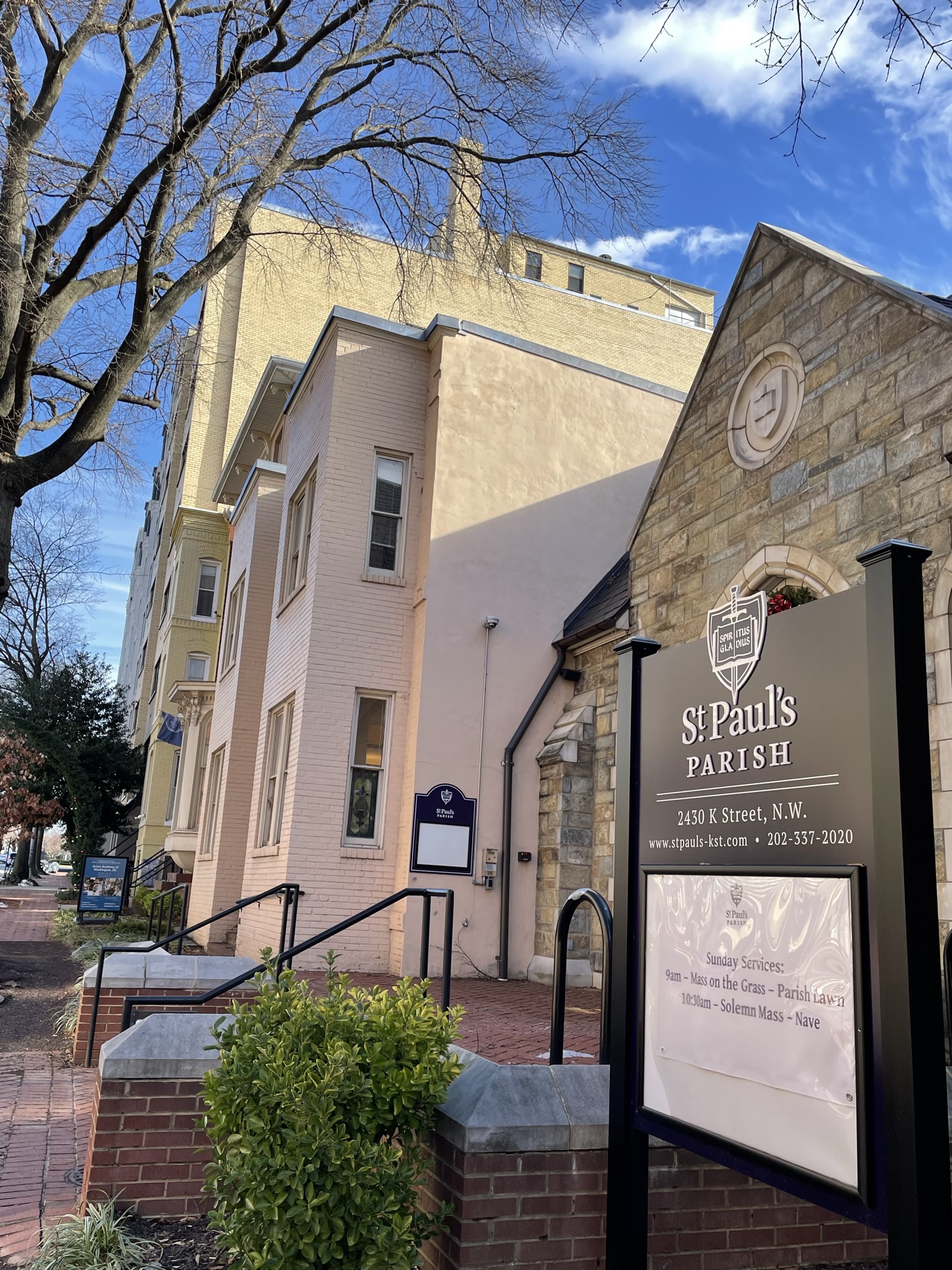 The historic buildings are located in the middle of the 2400 block of K Street. The three-story yellow brick building, No. 2420, was built in 1890 by James H. Grant and designed by architect N. R. Grimm. (One of many Historic District houses designed or built by them.) It is rectangular with a projecting square bay. The intricate wrought iron front staircase embellishes the otherwise simple dwelling. To the right, a narrow passageway leads into Snows Court.

The Manila House (No. 2422) was built in 1874 in an "Italian Villa" style. It is the most ornate in the Historic District. Built of concrete-block, the house is three-stories high and three-bays wide and features a prominent oriel bay window with hood molding. It also has decorative insets with cupids in relief above the door and windows. It was a gathering place for Filipino-Americans in the 1930s-1950s and featured a garden in Snows Court that grew native Filipino vegetables. In 2017, Filipino-American activists worked with the American Library Association to recognize the Manila House as a literary landmark, with a plaque in honor of author Bienvenido N. Santos. Santos (1911- 1996), wrote about the Manila House in a collection of short stories, "Scent of Apples," the winner of the 1981 American Book Award. St. Paul's Church owns the building, which houses the Acton Academy, a Montessori-based school.

Next are two salmon-colored brick buildings with projecting bays (originally Nos. 2424-2426, now marked No. 2430). They were built in 1885 for Louise A Veerhoff. They now serve as the Parish House for St. Paul's Church. Note the diamond-pattern leaded glass transom window of the house on the left. The house on the right also has leaded glass in the lower narrow window on the right side of the house.

St. Paul's Parish (2430 K St.) was founded in 1866 and built its first church in 1868 at Washington Circle (917 23rd St. NW, now the block with Whole Foods grocery store). In 1944, the U.S government moved to condemn the block that included the Church and use the property to build a hospital for The George Washington University. The Church filed a lawsuit challenging the condemnation. The challenge failed, but the Church received $152,500 in compensation and was allowed to remove its organ, pews, and other furnishings that were stored at government expense. Other residents of the block also sued unsuccessfully to stop their evictions. About 25% were African American residents who argued since the GWU Hospital would not admit them because of their race, government funds should not be used to build the hospital. The old church was demolished in 1944 and the congregation moved into the current building in 1948.

The current church was designed in the Gothic style by Philip H. Frohman, who had been the architect of Washington Cathedral since 1912. St. Paul's was built by W.E. Mooney & Co. The church is faced with irregular sized rectangular field stone and its tall vertical windows feature pointed arches. Since its founding, the Parish has followed the Episcopalian Anglo-Catholic tradition. For years, the Parish has had a strong musical tradition. It hosted the first vested choir (associated with a choral or sung service) in Washington and has a notable Schoenstein pipe organ.

Carandang-Tiongson,Titchie, "The Manila House In Washington, D.C.," Positively Filipino, May 2017 (link below)