Item 17 of 19
This is a contributing entry for Foggy Bottom Historic District Walking Tour and only appears as part of that tour.Learn More.

Turning left onto 25th Street, the first half of the 900 block features row houses built from 1879 to 1979. The three-story (plus basement) row houses feature a variety of decorative brick work. One of these, No. 951, is the tallest of the remaining seven Peter McCartney-built houses in the neighborhood. Three-story plus row houses are present in Washington, but rare in the Historic District. 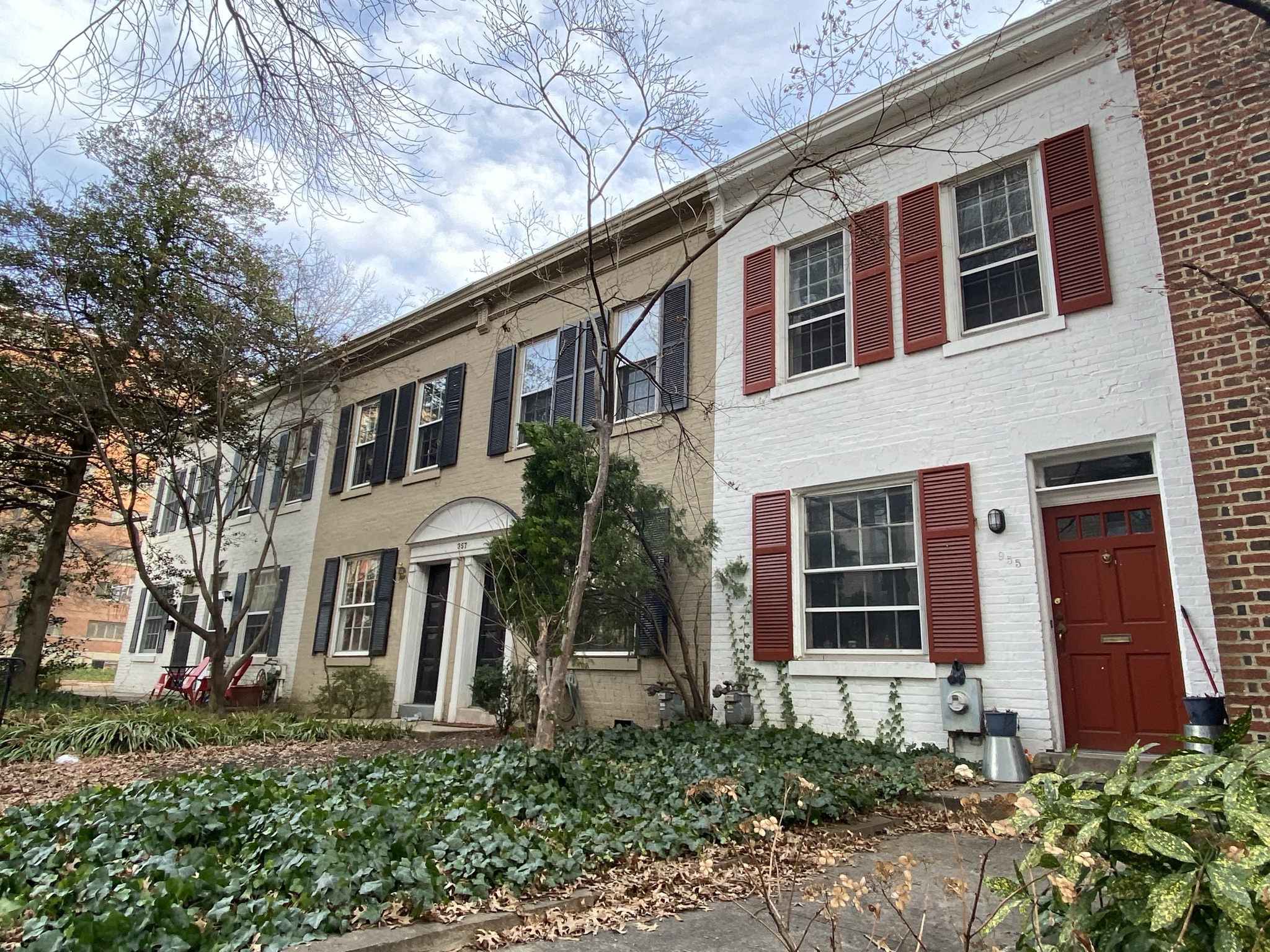 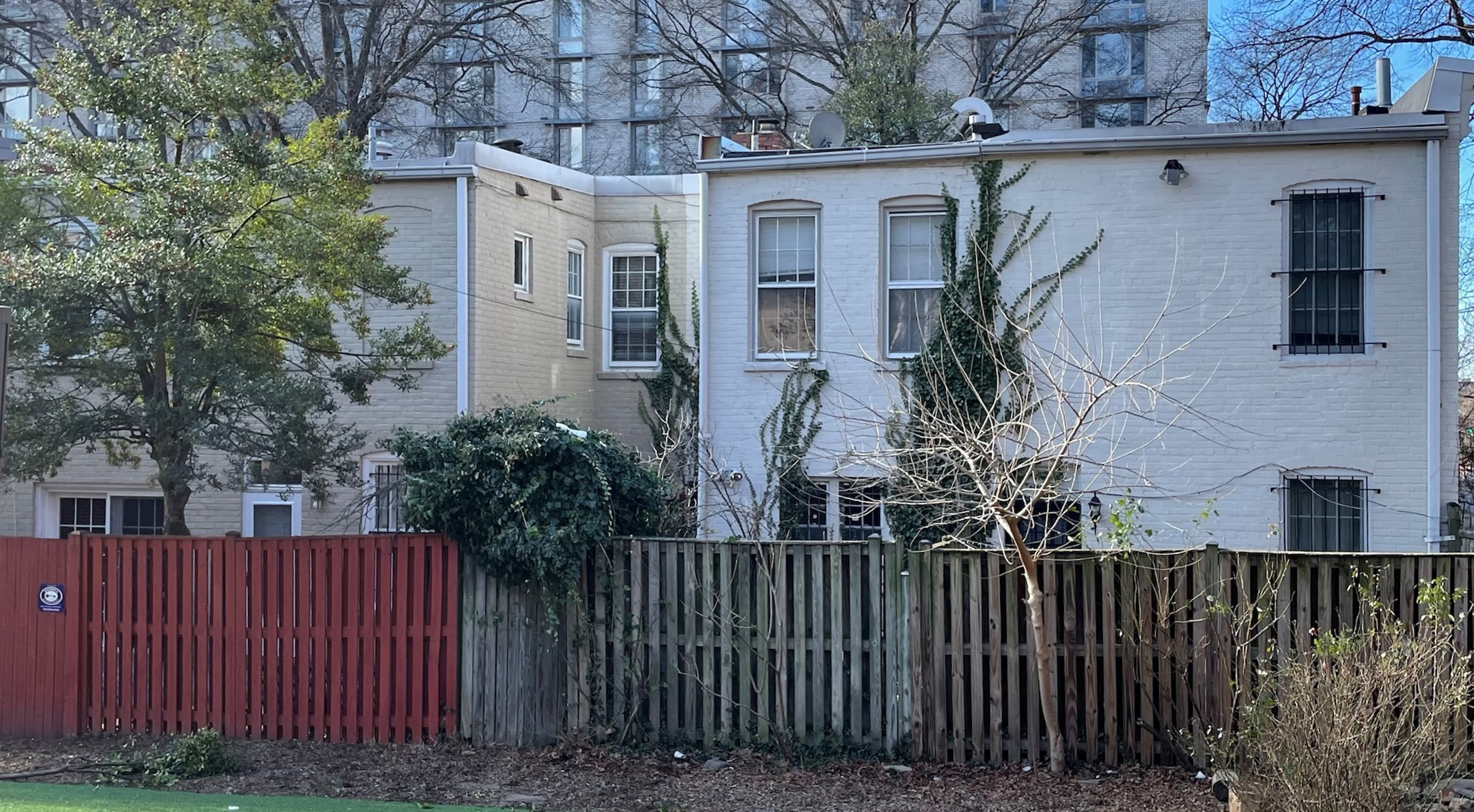 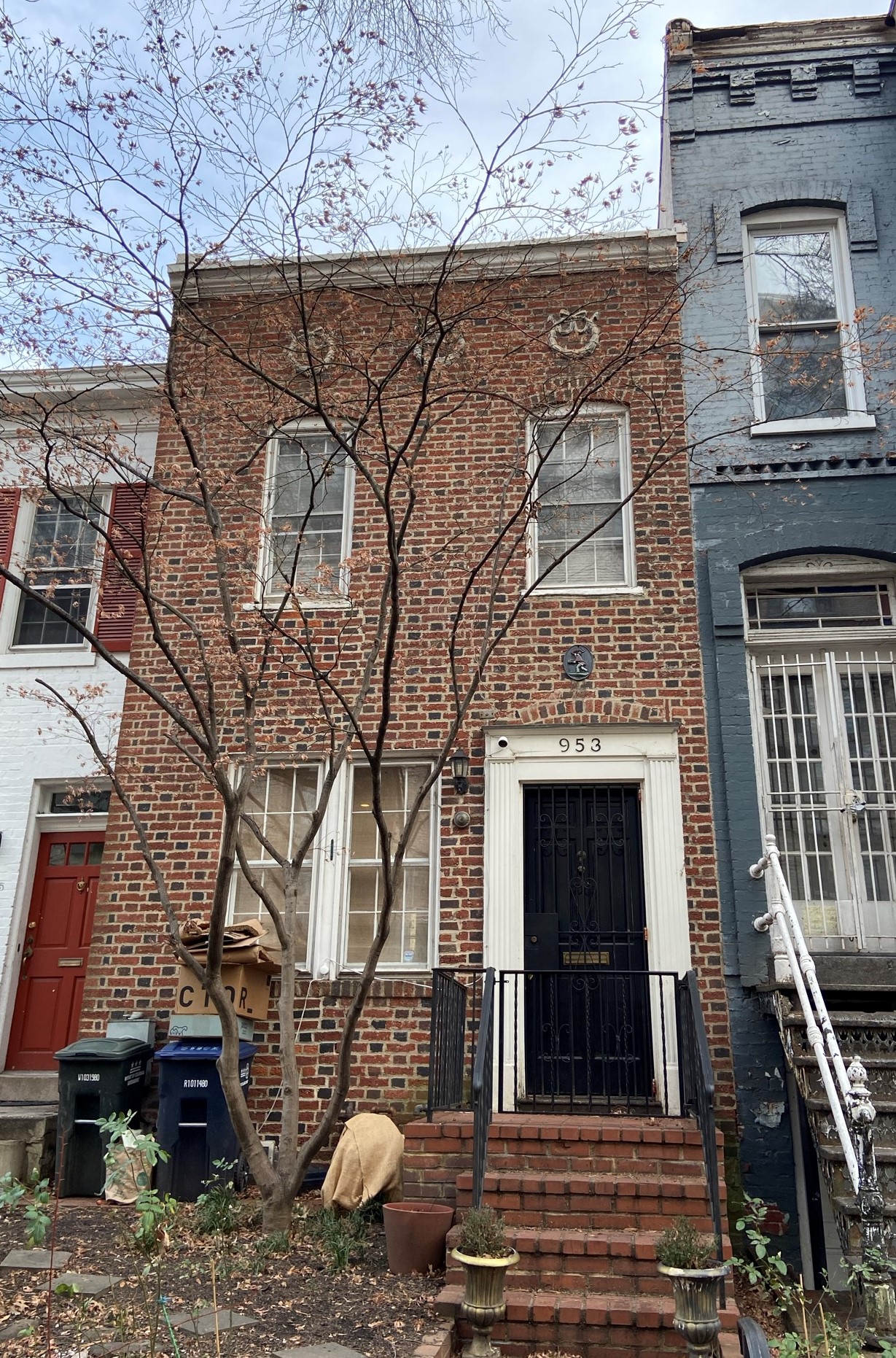 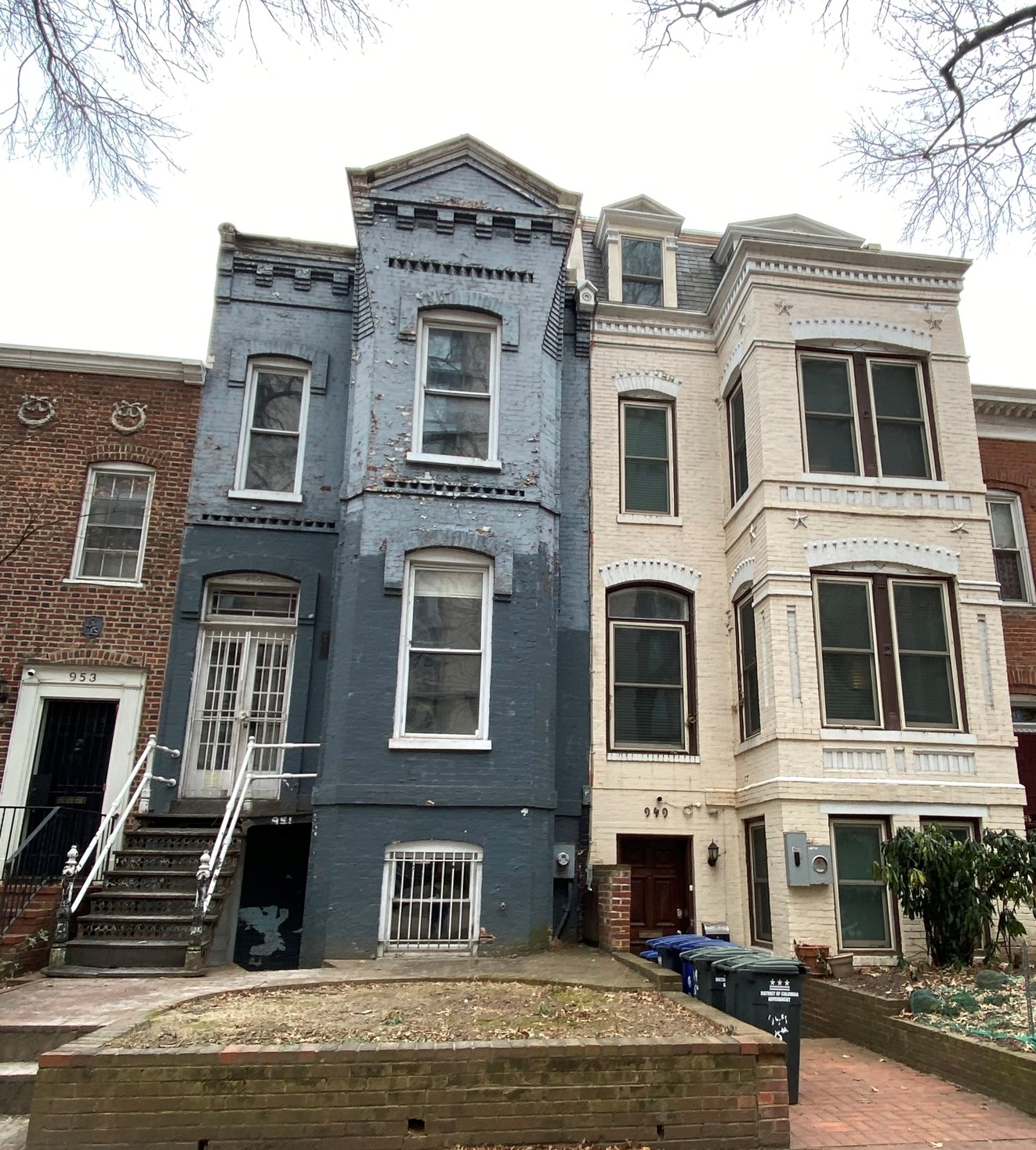 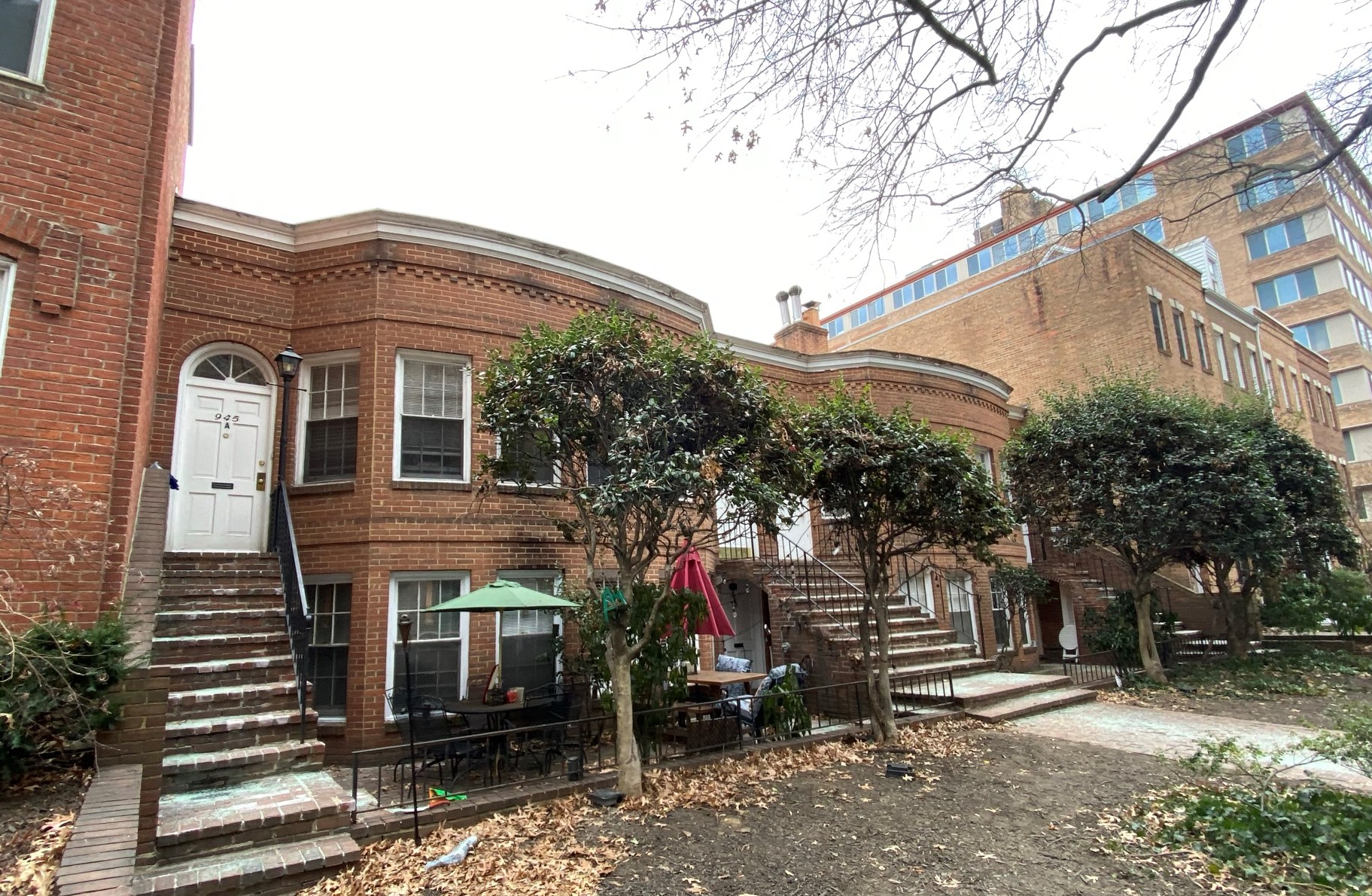 The first group of five row houses (955-963 25th St.) were built in 1911 by Harry A. Kite and designed by architect A.H. Beers. They are simple, two-floor, two-bay brick rowhouses, built towards the end of the district's historic period (1915). There are lintels over the windows and doors. The fan connecting the front doors of Nos. 959-961 and white pilasters are likely a subsequent addition.

The next house, No. 953, was designed by architect R. Ough and built Geo. W. Ray in 1909. It features a polychrome Flemish bond brick pattern and three decorative wreaths below the roofline.

The blue brick building (No. 951) was built by Peter McCartney for Jas. Gowens in 1883. It is McCartney's tallest building. The three story building with an English basement has a large projecting bay. It has a pediment roof capping the projecting bay and brick arches over the windows. Note also the stained-glass transom window over the front door, and string courses on the first and second level. The house recently sold for $1,225,000 and is being renovated.

The white building next door, No. 949, was built by H.F. Morris for Jas. Gowens in 1880. It has four stories and is crowned by a gable dormer window in the mansard roof, making it one of tallest row houses in the Historic District. It displays elaborate ornamental brickwork in a variety of patterns. Its four metal "star bolts" connect the façade to the joists behind the brick to stabilize the structure.

The adjoining red brick house, No. 947, was built in 1879 for Leo McGraw. It is a two-story brick house, three-bays wide, with decorative brick arches over the windows.

The next building (Nos. 939-945), built in 1959, features elegant curved brickwork. It has two stories and eight units, with large semi-circular projecting bays and Palladian fans over the doors.

At the Snows Court entrance, No. 933 and the adjoining three buildings were all built in 1979. In the mid-60s, No. 933 housed the Plaza Food Mart, which served Snows Court.

Looking across to the west side of 25th Street is the Claridge House Cooperative (950 25th St.) (b.1966), which has annexed the adjoining 1957 apartment (940 25th St.). The building was designed by architects Corning & Moore. The combined co-op buildings contain 352 studio and one bedroom units. To the left of the entrance to Hughes Mews is The River Inn, an-all suite hotel. It was built as the Alamac Apartments in 1957, designed by architect Edwin Weihe. The River Inn converted to a hotel in 1978, just before a 1980 zoning change prevented such conversion. The hotel attracted tour buses and Foggy Bottom residents persuaded the city to ban such buses on residential streets. The ban was challenged, but upheld, creating a national precedent. These buildings are not included in the Historic District.