Item 7 of 19
This is a contributing entry for Foggy Bottom Historic District Walking Tour and only appears as part of that tour.Learn More.

Hughes Mews - formerly known as Hughes Court - has a small collection of original picturesque alley row houses dating from the late 1800s. At one time this alley held as many people as nearby Snows Court and shared its bad reputation as being overcrowded, unsanitary, and unsafe. As with Snows Court, that reputation ignored the presence of the alley's low-income, but close-knit and vibrant community. The alley currently features a large mural hand-painted by artist Elizabeth Graeber, "Garden," featured in the 2014 Arts in Foggy Bottom bi-annual exhibition.

Hughes Court with a description of residents as "Merry Idlers", early 1900s 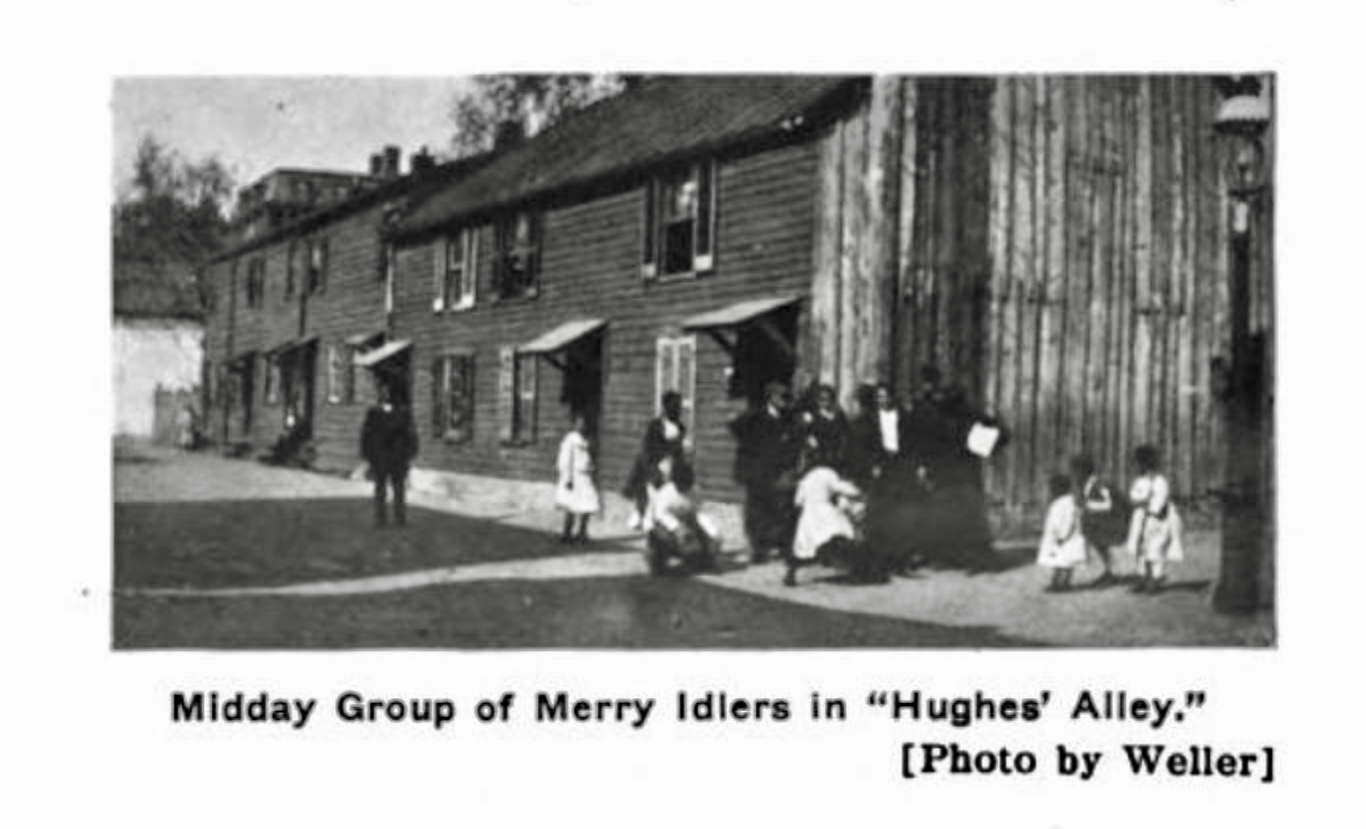 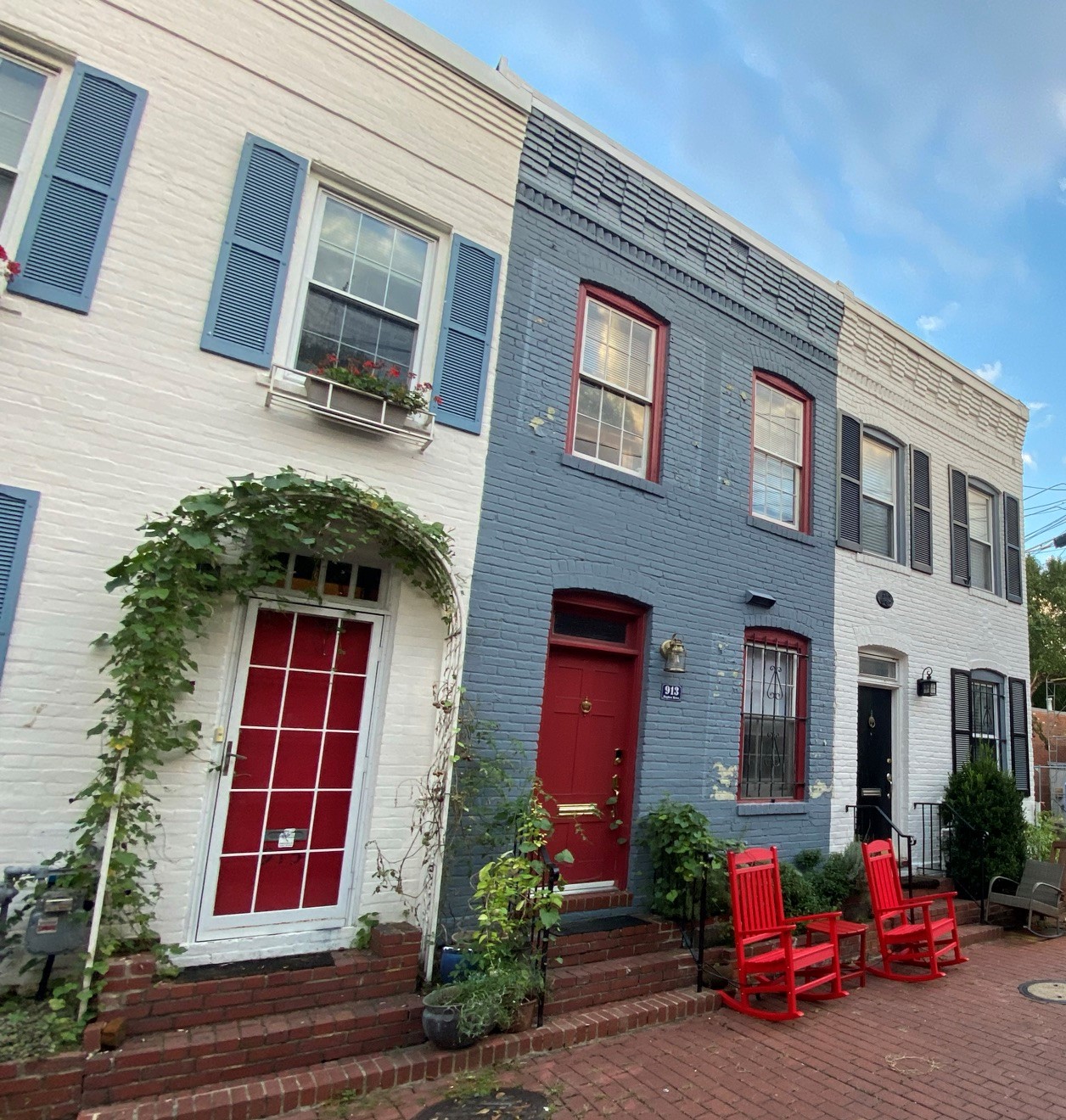 The last remaining row of historic houses in Hughes Mews 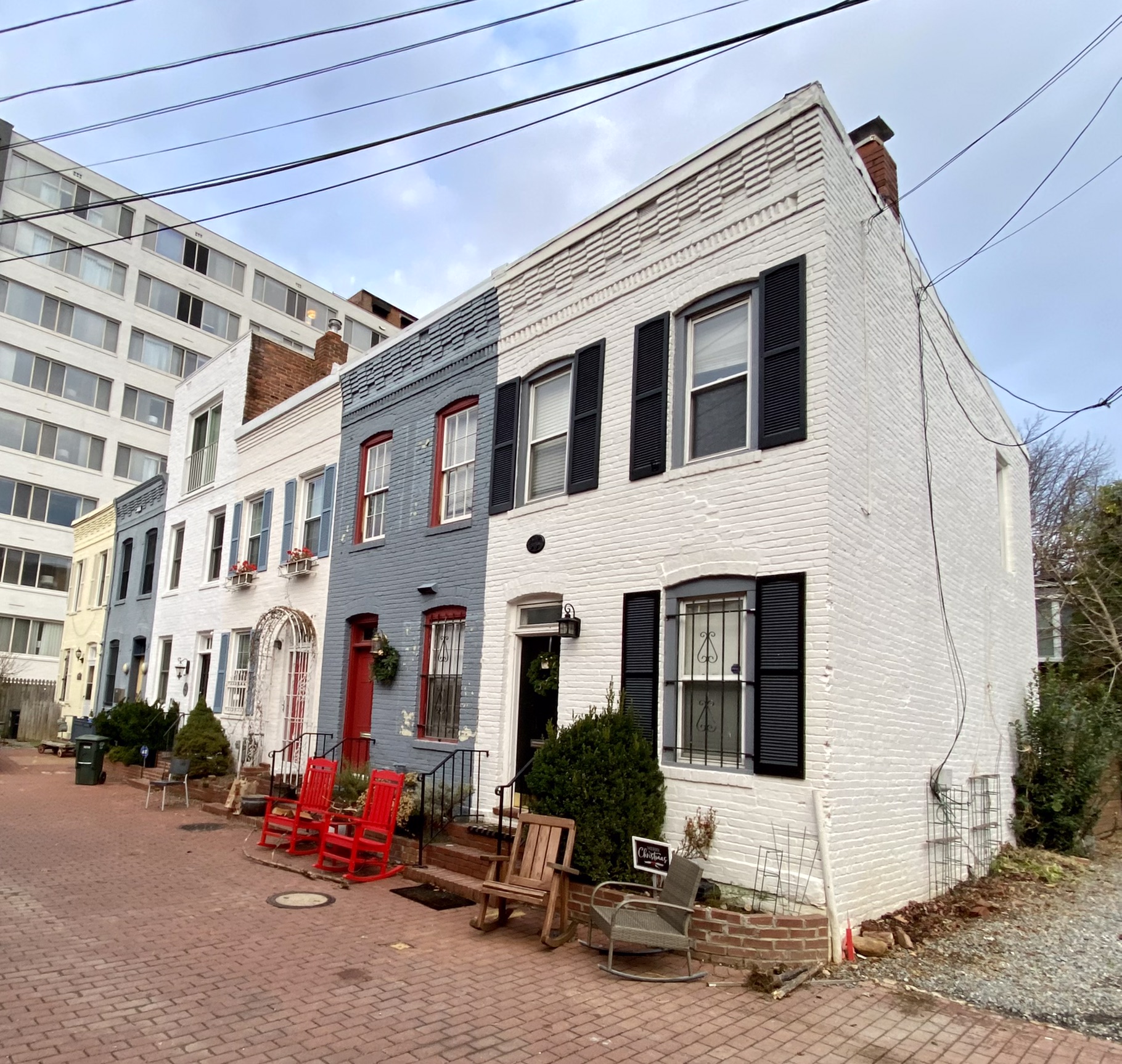 The picturesque wall with "Garden" mural by Elizabeth Graeber, Arts in Foggy Bottom, 2014 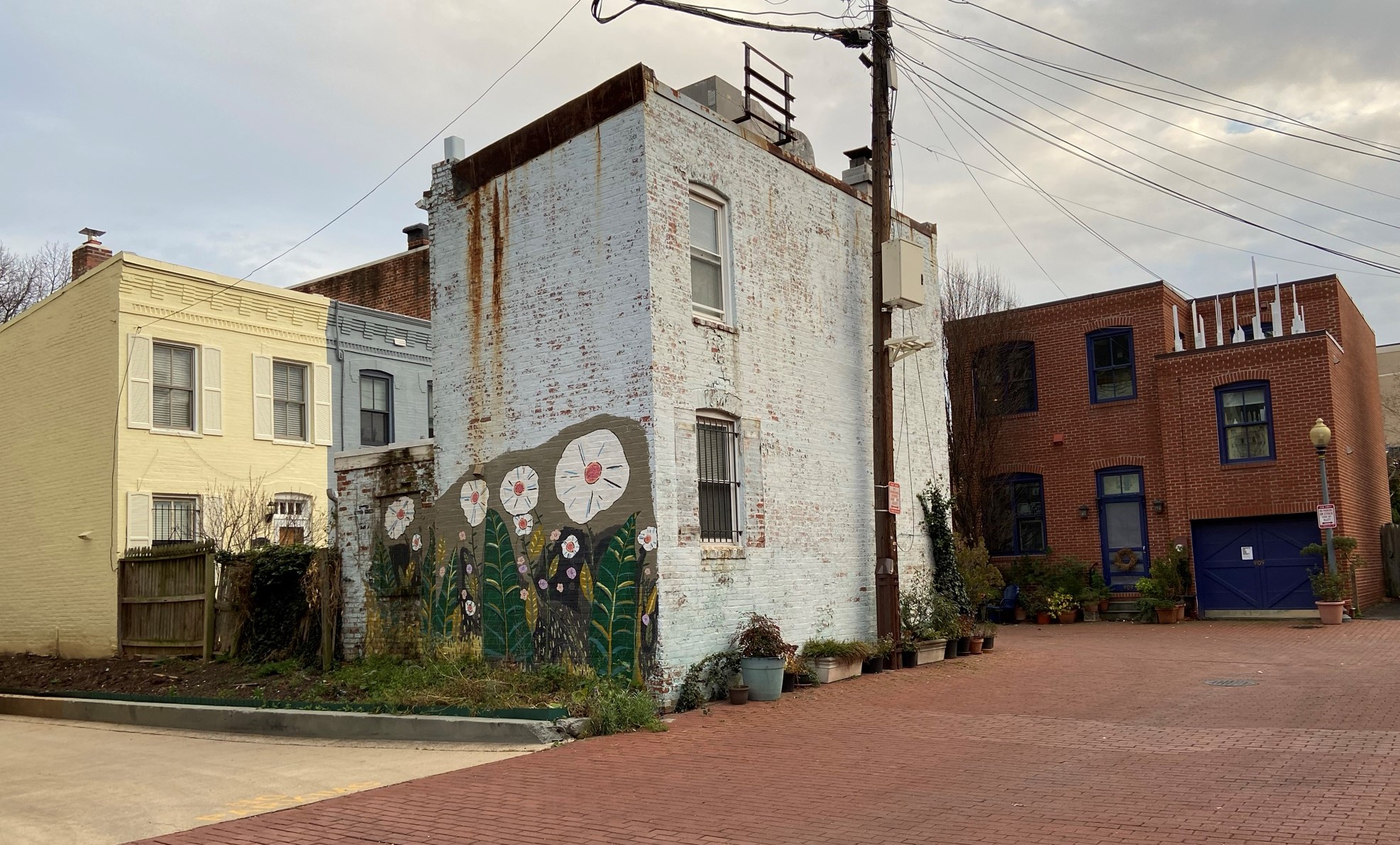 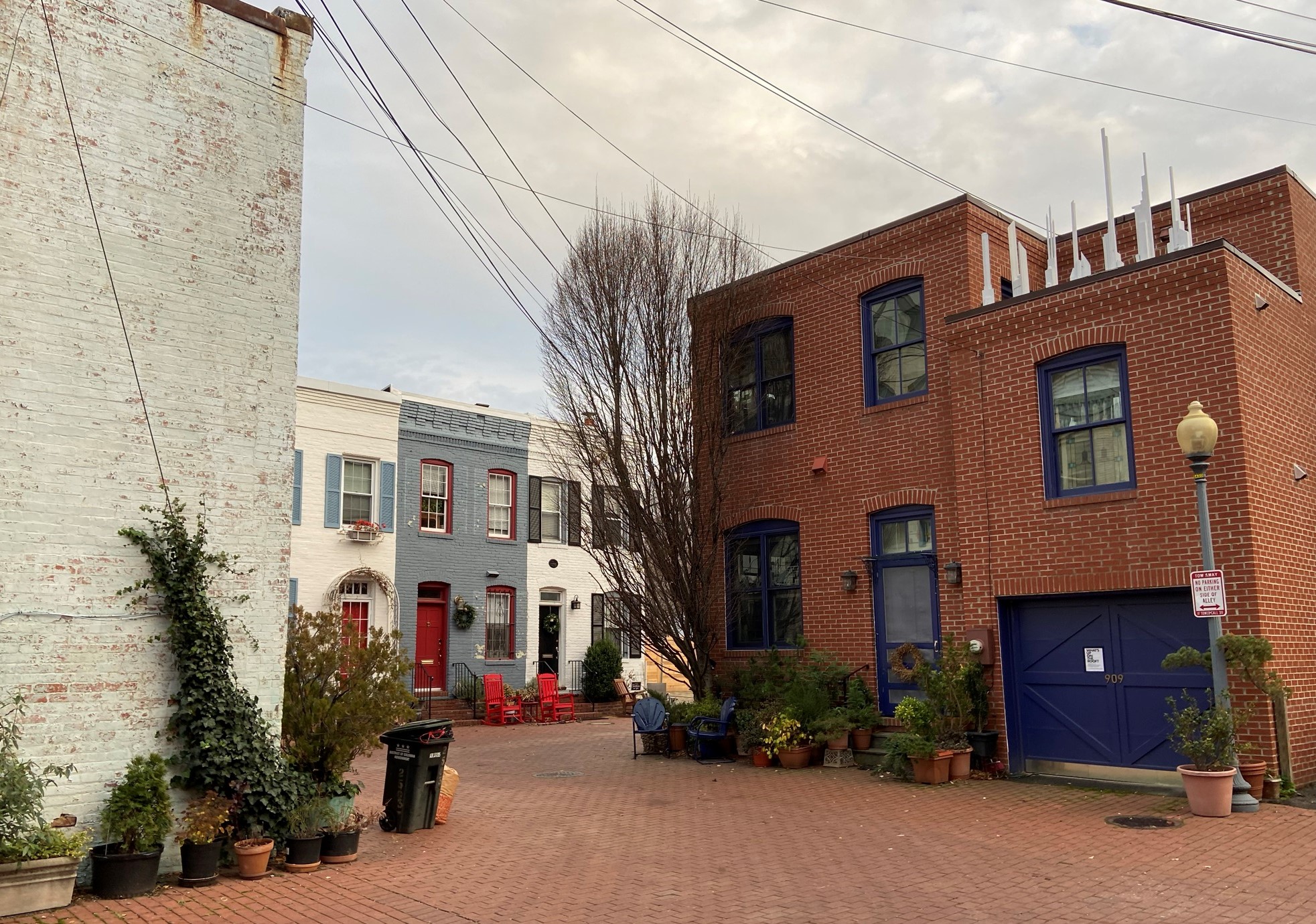 This corner is currently a lovely alley space with creative container gardens placed in front of the remaining row houses. In 1892, there were up to 300 people living in Hughes Court. Most of the old row houses were demolished and replaced by large apartment buildings in the mid-late 1950s. Only this group (911-923 Hughes Mews) of row houses remains. Nos. 911 and 913 were built in 1887 by Geo. E. Emmons for J.W. Payne. Nos. 915-923 were designed, built and owned by Danenhower & Sons in 1885.

In the early 20th century, Hughes Court shared Snows Court's reputation for overcrowding, disease, and crime. Housing "reformer" Rev. Wilbur V. Mallalieu wrote in 1912 that Snows Court, "a festering sore in the District of Columbia" was "almost immediately connected with Hughes Court, another interior alley. The two form one underworld community." Charles Frederick Weller in "Neglected Neighbors" (1909) (p. 246) included both alleys as part of "a large area of stagnation," noting that "[o]dors from the gas works and influences from large breweries are especially evident here."

There is a folktale concerning a notorious resident of Hughes Court named Sam McKeever. He worked as rag merchant by day. But by night, he was a grave robber and body-snatcher, who sold the bodies to medical schools. The story is one night in 1918, he came upon a woman in a park, jumped her from behind, threw a bag over her, knocked her on the head, and sold her to a medical school. When he got home to Hughes Court, his wife was missing and he realized what he had done, but it was too late.

The modern square brick house (909 Hughes Mews) replaced a garage in 2004. It is currently occupied by artist/writer/story-teller J. Ford Huffman.