Constructed in 1890 for banker J.W. McAlister, this home has had a long history and fascinating history. Though McAlister only lived in the home for a few decades, it became the home of clothier A.J. August for several years before being donated as a location for the St. Joseph Museum. The museum also only remained for a short time, fueling tales of hauntings that persist to this day. 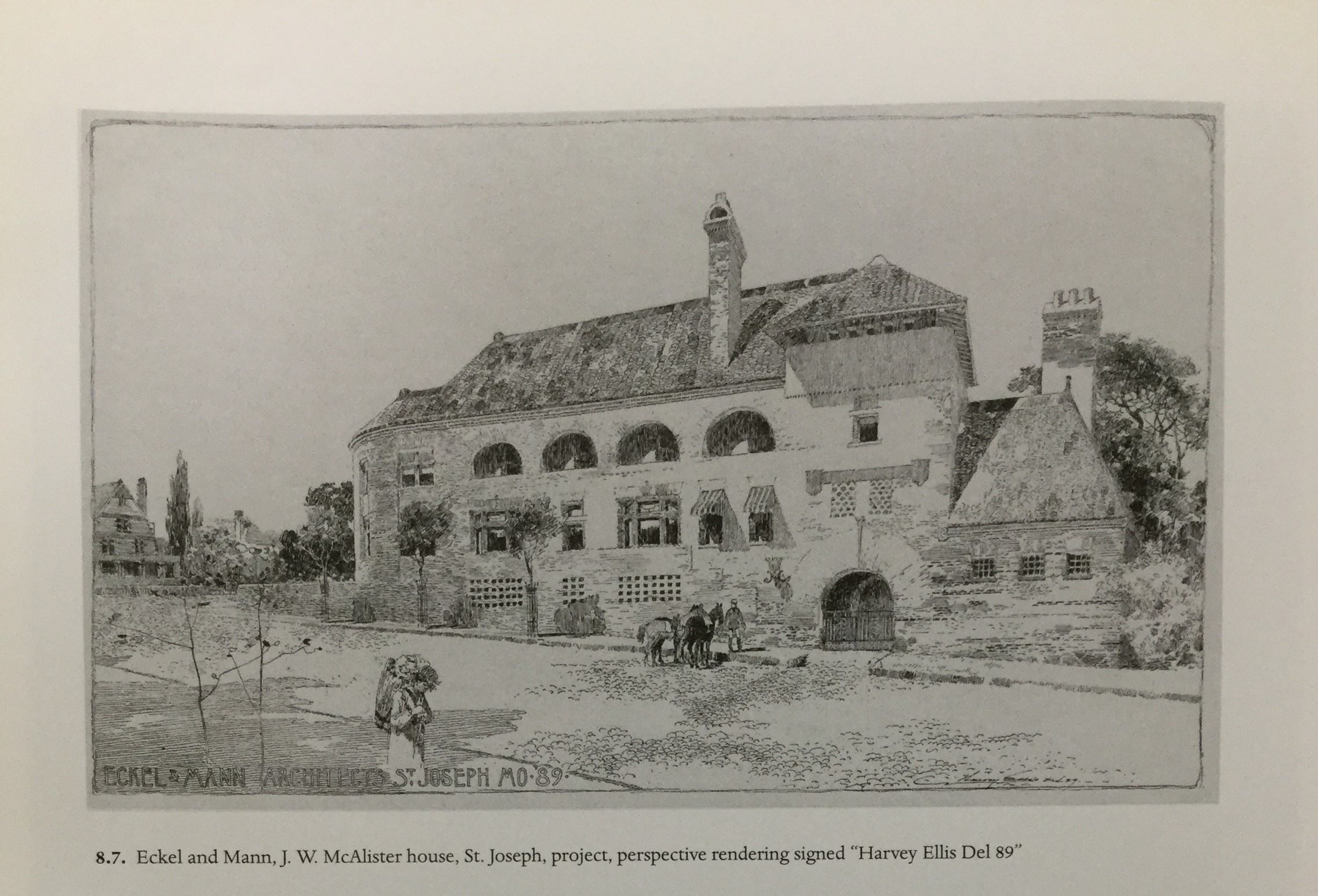 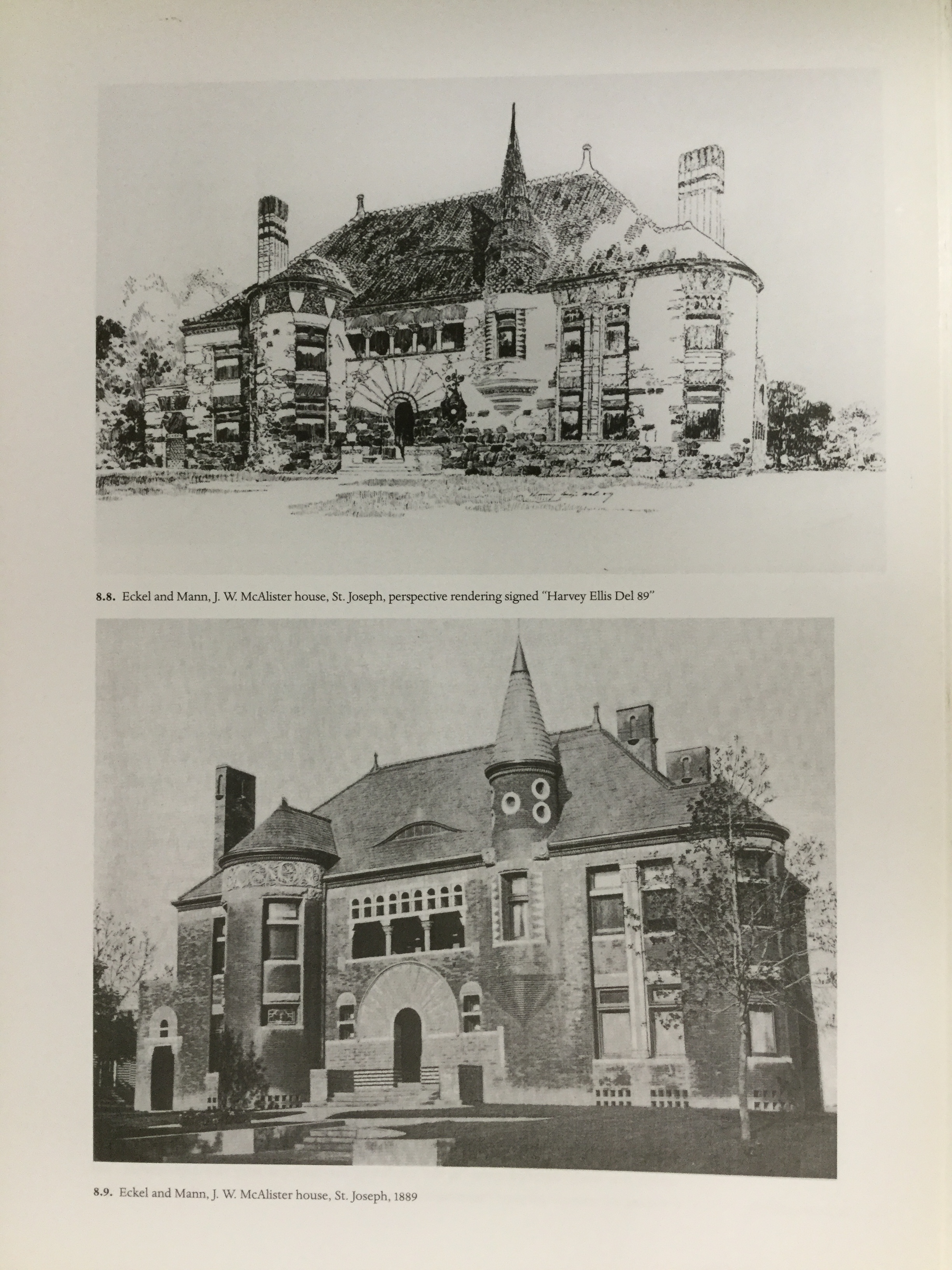 At the height of St. Joseph’s building movement, corresponding with Harvey Ellis’ tenure with Eckel & Mann, J.W. McAlister commissioned a home for himself and his growing family at the corner of 19th and Felix Streets. Ellis drafted two radically different plans for the structure, but the finalized home maintained the form of the second plan. It was a large brick structure in the Spanish-Romanesque style. It had several towers and oriels, a loggia and archway over the main entrance, as well as an arched carriage entrance attached to the rear of the building. As with many of the Ellis buildings, the McAlister home was completed in 1890.

The McAlister home had a long history of occupancy following the departure of its original owners to California. Albert Jacob August, founder of the A.J. August Clothing Store at Fourth and Felix Streets, purchased the home from McAlister and moved in in April 1903. August was born in New York in 1860 to Jacob and Bertha Eppstein August. His father, who was also a clothier, moved the family to Kansas in the 1880s. A.J. August came to St. Joseph to marry Sarah Weil in 1885, establishing his own business which would become one of the most well known brands in the region. The couple had a son, Stanley, and a daughter, Elaine, who were teenagers when they moved into the former McAlister home.

After A.J. August passed away in 1940, the home became the perfect location for the St. Joseph Museum. The museum, which had been established in 1927, had made its home in the annex of the St. Joseph Public Library at Tenth and Felix. Its ever growing collection required a larger space, so the board of directors purchased the A.J. August house to make room for the museum’s extensive exhibits. The museum was located in the A.J. August home from 1942-1947 when it expanded once again into the Wyeth-Tootle Mansion.

The short tenure of the St. Joseph Museum location within the home is often cited as an example of the paranormal activity which seems to occur within. The museum had a difficult time maintaining security guards to watch the building overnight due to reports of running water and closing doors. Residents since have cited hearing a child, a servant, and a young man as well as movement through the home and missing items. Stanley August passed away at the young age of 36 while still residing in his parents’ home. J.W. McAlister allegedly lost a child whose face was carved in terra cotta above the entrance arch by Ellis’ design. These legends have continued to make the McAlister/A.J. August House a favored piece of St. Joseph architecture through the generations.

Towers of St. Joseph: The Local Architecture of Harvey Ellis

Harvey Ellis was born in Rochester, New York to Dewitt and Eliza Haseltine Ellis on October 17, 1852. He was the eldest of four brothers, the youngest passing away in infancy. He attended West Point, but was discharged due to failing grades in 1872. Harvey was artistic throughout his youth and after leaving West Point joined a group of artists in Rochester creating and teaching art. They formed the Rochester Art Club, one of the oldest continuing clubs, in 1877. The year of the club's founding, Harvey joined the architectural firm of his brother, Charles. Harvey's art gained national attention and his architectural stylings came to define Rochester. The firm of H. & C.S. Ellis operated in Rochester from 1877-1885, constructing civic and residential buildings throughout their hometown. The brothers consistently made the news, Harvey as a renowned artist and Charles as a member of the school board. Their mother, Eliza, passed away on September 13, 1884 and by the beginning of 1885, the firm became embroiled in a bribery case. Charles was indicted on January 29 on charges of bribing a public official to secure the contract to build the county jail. The trial was messy and heavily publicized and by March, Harvey had left Rochester for Minnesota. After spending some time in St. Paul, Harvey joined the firm of Leroy Buffington in Minneapolis in 1887. Buffington became famous for inventing the skyscraper and was the premiere architect in the Midwest through the 1880s. As Ellis was an award winning architect and artist at the time, it is likely Buffington sought him out for his work. Their styles worked well together and Buffington provided a shining reference for Ellis when he and his wife adopted a Swedish orphan they named Charlie. Harvey Ellis came to St. Joseph in 1889, hired by Eckel and Mann to draft plans for the St. Louis City Hall. Ellis was the highest paid employee at Eckel and Mann from 1889-1891, splitting his time between St. Joseph and St. Louis as construction on the City Hall commenced. Mann and Ellis moved permanently to St. Louis in 1891, creating numerous works for the city until 1893 when Ellis returned to Rochester and restarted the firm with his brother as Charles S. and Harvey Ellis, Architects. Harvey passed away January 2, 1904 leaving a legacy of art and architecture.