The Soldiers’ Memorial, located between Market and Pine and 13th and 14th Streets, is the first of the two war memorials in St. Louis completed in honor of World War I veterans. Soldiers' Memorial Military Museum was dedicated by Franklin D. Roosevelt, as a memorial for veterans and as a museum for preserving a historic collection of military artifacts, on October 14th, 1936. Two museum galleries contain a collection of military-related objects of both local and national historical significance, such as photographs, posters and printed materials, uniforms, flags, medals, firearms, edged weapons, and a range of war-time memorabilia from the battlefront and the homefront. The building was designed by St. Louis architectural firm Mauran, Russell & Crowell in a stripped Classical style, with a severely simplified form and limited ornament. Notable features include the massive stone columnns with carved stone panels between the columnns that bear the faces of war veterans. On the north and south sides of the building are large stone statues of winged horses and martial looking men and women, representing courage, loyalty, vision, and sacrifice. 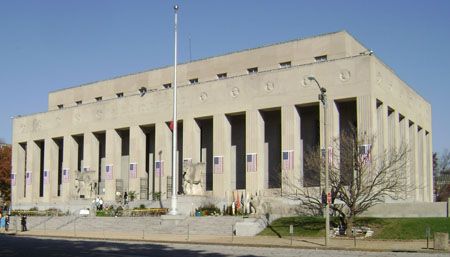 Four monumental sculptural groups representing figures of Loyalty, Vision, Courage and Sacrifice by sculptor Walker Hancock stand, with their horses, on the north and south sides of the building. 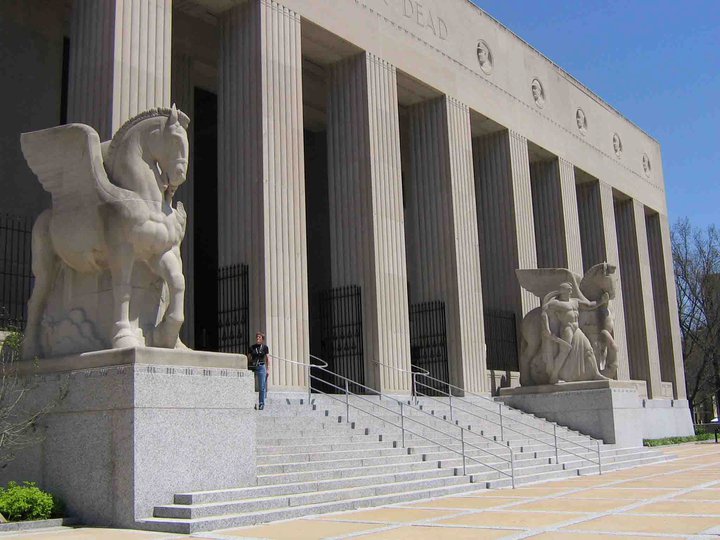 The initiative to construct a memorial plaza and memorial building to honor the citizens of St. Louis, who made the ultimate sacrifice in the World War I, began in 1923. Over the course of several years, the city of St. Louis and its citizens raised money for the project. Under the leadership of Mayor Bernard F. Dickmann, in 1933 additional funds were raised, and with the help of money from the federal Relief and Recovery Act, the construction of the building began in 1935. President Franklin D. Roosevelt traveled to St. Louis to dedicate the site on October 14th, 1936, and the memorial and the museum officially opened to the public on Memorial Day, May 30th, 1938.