The sculptor, Harry Weber, captures the strength between the two during the eleven year ordeal of the case, as well as their time as slaves in addition to the poor result of the case itself. The statue itself was unveiled June 8th, 2012. 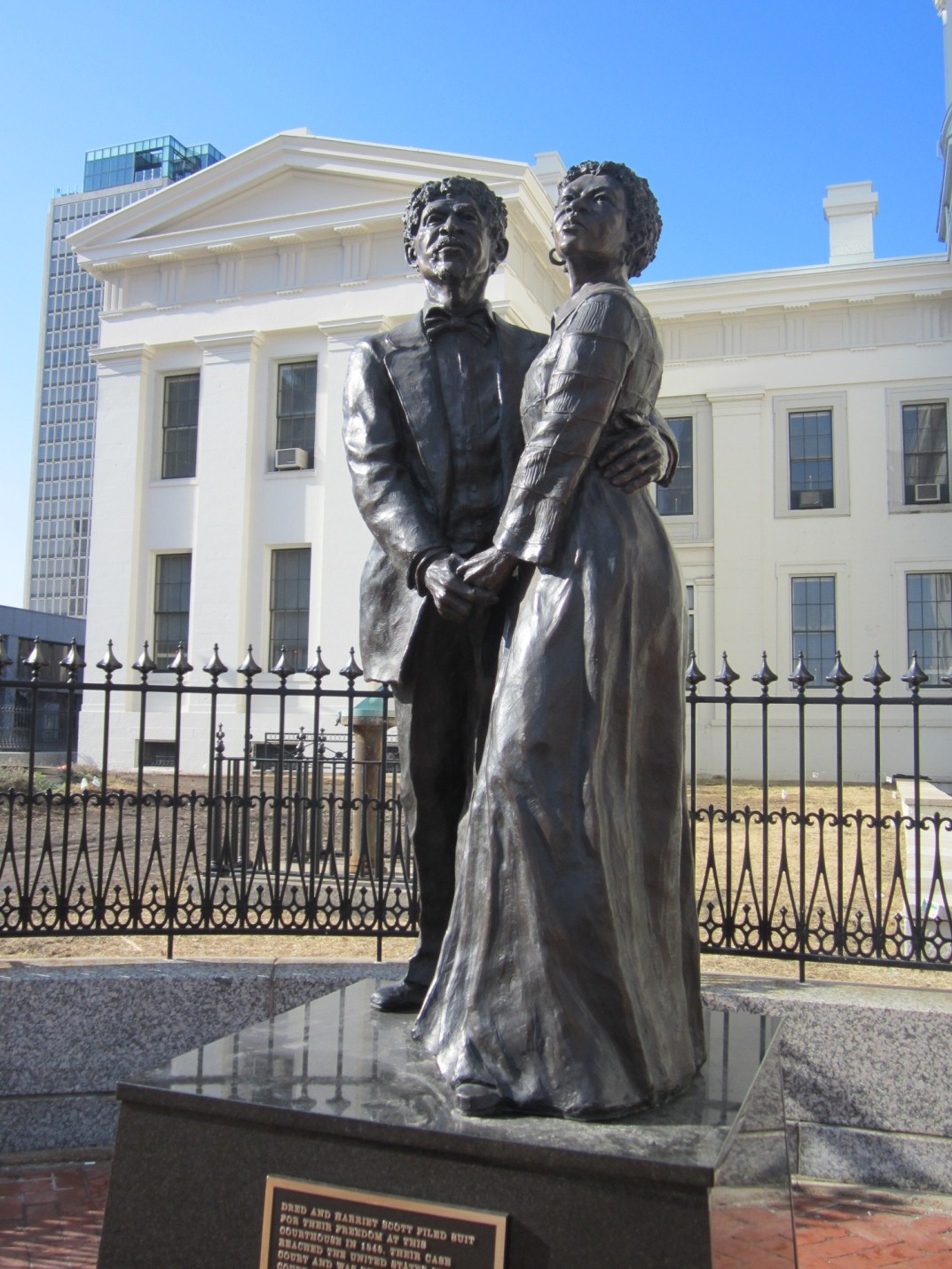 A view of a plaque dedicated to the Scott's at The Old Courthouse in St. Louis, Missouri. 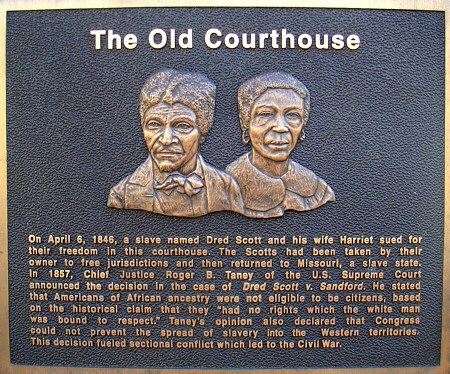 The Scott's statue is located just in front of The Old Courthouse. 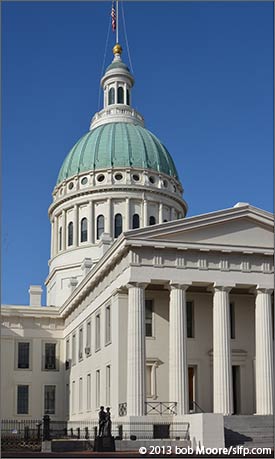 Dred Scott was born in Virginia around 1799 as property of the Peter Blow family. He was illiterate and had spent his entire life as a slave. Dred Scott moved to St. Louis with the Blows in 1830, but was soon sold due to his master's financial problems. He was purchased by Dr. John Emerson and accompanied him to Illinois and the Wisconsin Territory, which had prohibited slavery by the Missouri Compromise of 1820. During this period, Dred Scott married Harriet Robinson, also a slave, and had two children, Lizzie and Eliza. John Emerson later married Irene Sanford. In 1842, the Scott's returned with the Emerson’s to St. Louis where John Emerson died the following year. It is believed that Mrs. Emerson hired out Dred Scott, Harriet, and their children to work for other families.

On April 6th, 1846, Dred Scott and his wife Harriet filed suit against Irene Emerson for their freedom. Scott had previously lived in free territories, yet made no attempt to end his servitude. There are several theories as why Dred Scott waited to petition for his freedom - the theme between each being that Scott felt it was not detrimental to seek a life elsewhere. In fact, his original owners, the Blows family, by most accounts treated Scott fairly well, albeit he remained a slave. This could account for Scott waiting to petition for his freedom. The exact reason for Scott petitioning for his freedom is not known, although historians have considered three possibilities: He may have been dissatisfied with being hired out by Mrs. Emerson; Mrs. Emerson might have been planning to sell him which would have meant a great chance of a rough life working tirelessly under a brutally-strict slave owner; or he may have offered to buy his own freedom and been refused by Mrs. Emerson. It is known, however, that the suit was not brought for the political reason of abolition of slavery.

It is thought that friends in St. Louis who opposed slavery encouraged Scott to sue for his freedom on the grounds that he had once lived in a free territory. In the past, Missouri courts supported the doctrine of "once free, always free”, and for this reason many in the North, in addition to their collective inclination to support abolition, felt that Dred Scott could win his case. The case would encompass eleven years from its birth on April 6th, 1846 to a resolution on March 6, 1857.

As he was illiterate, Dred Scott needed help with his suit. John Anderson, the Scott's minister, may have been influential in their decision to sue and the Blow family, Dred's original owners, backed him financially. Support of those around them helped the Scott’s through this trying time as the case would encompass eleven years from its birth on April 6th, 1846 to a resolution on March 6, 1857. A chilling reminder of such unimaginable difficulties during this period can be noted within the body language of Harriet and Dred Scott in their dedication statue.

In 1850, the state court finally declared Scott free. However, Scott's wages had been withheld pending the resolution of his case, and during that time Mrs. Emerson remarried and left her brother, John Sanford, to deal with her affairs. Mr. Sanford, unwilling to pay the back wages owed to Scott, appealed the decision to the Missouri Supreme Court. The court overturned the lower court's decision and ruled in favor of Sanford. Scott then filed another lawsuit in a federal circuit court claiming damages against Sanford's brother for Sanford's alleged physical abuse against him. The Missouri court ruled that Scott could not sue in federal court because he had already been deemed a slave under Missouri law. Scott appealed to the U.S. Supreme Court, which reviewed the case in 1856.

It is difficult to understand today, but under the law in 1846 whether or not the Scotts were entitled to their freedom was not as important as the consideration of property rights. Slaves were considered property rather than people, however, sweeping verification of this by a Supreme Court decision had not yet taken place before this case. Therefore, the Supreme Court’s verdict in Dred Scott vs. Stanford on March 6, 1857, decided several imperative facts that had overwhelming implications across an already divided society.

On the south lawn of the Old Courthouse in St. Louis, the Dred and Harriet Scott Statue Dedication depicts the pair as close, holding their heads high, hands strongly and passionately intertwined, their eyes directed not only Arch-ward and across the Mississippi River, but toward a horizon of freedom in which they believed enough to one day finally see.