The Battle of Fort Davidson, also known as the Battle of Pilot Knob, was the first full-scale engagement of Confederate General Sterling Price's raid on Missouri during the Civil War. Although outnumbered by ten-to-one, the Union defenders managed to repulse repeated Confederate assaults on their works before slipping away during the night of September 27, 1864. The attacking Rebels took possession of the fort the next day, but Price's waste of men, time, and ammunition dashed his hopes of seizing St. Louis for the Confederacy. The park includes monuments and a visitor's center that relate the history of the raid and the battle. Portions of the Fort Davidson earthworks remain, as does the massive crater left by Union troops when they blew up their remaining ammunition during the retreat.

A line of cannon at the present-day historic park. The site contains many artifacts and detailed exhibits of the Battle of Pilot Knob--a crucial moment in the latter days of the Civil War. 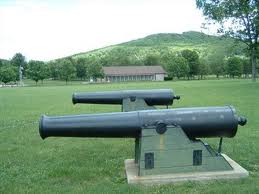 An overhead view of Fort Davidson. The earthen walls were 9-feet tall and 10-feet wide. A dry moat 9-feet deep made the walls extremely difficult to scale. A drawbridge at the SE corner was the only entrance to the fort. 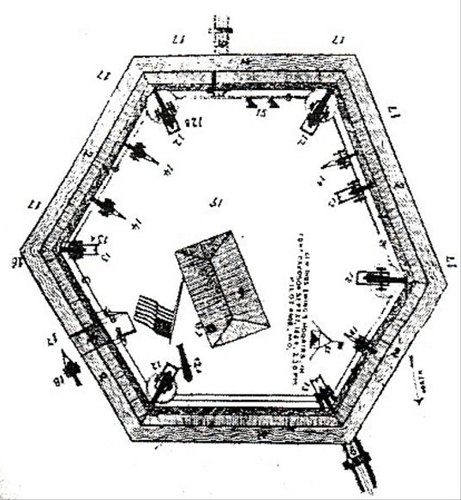 The Visitor Center and museum at Pilot Knob State Historic Park, which contains many artifacts from the battle and an exquisite diorama of the battlefield. 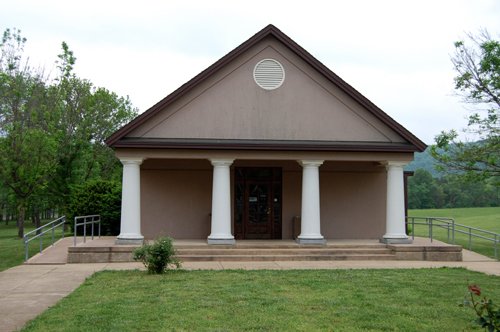 A contemporary map of Pilot Knob and the area. 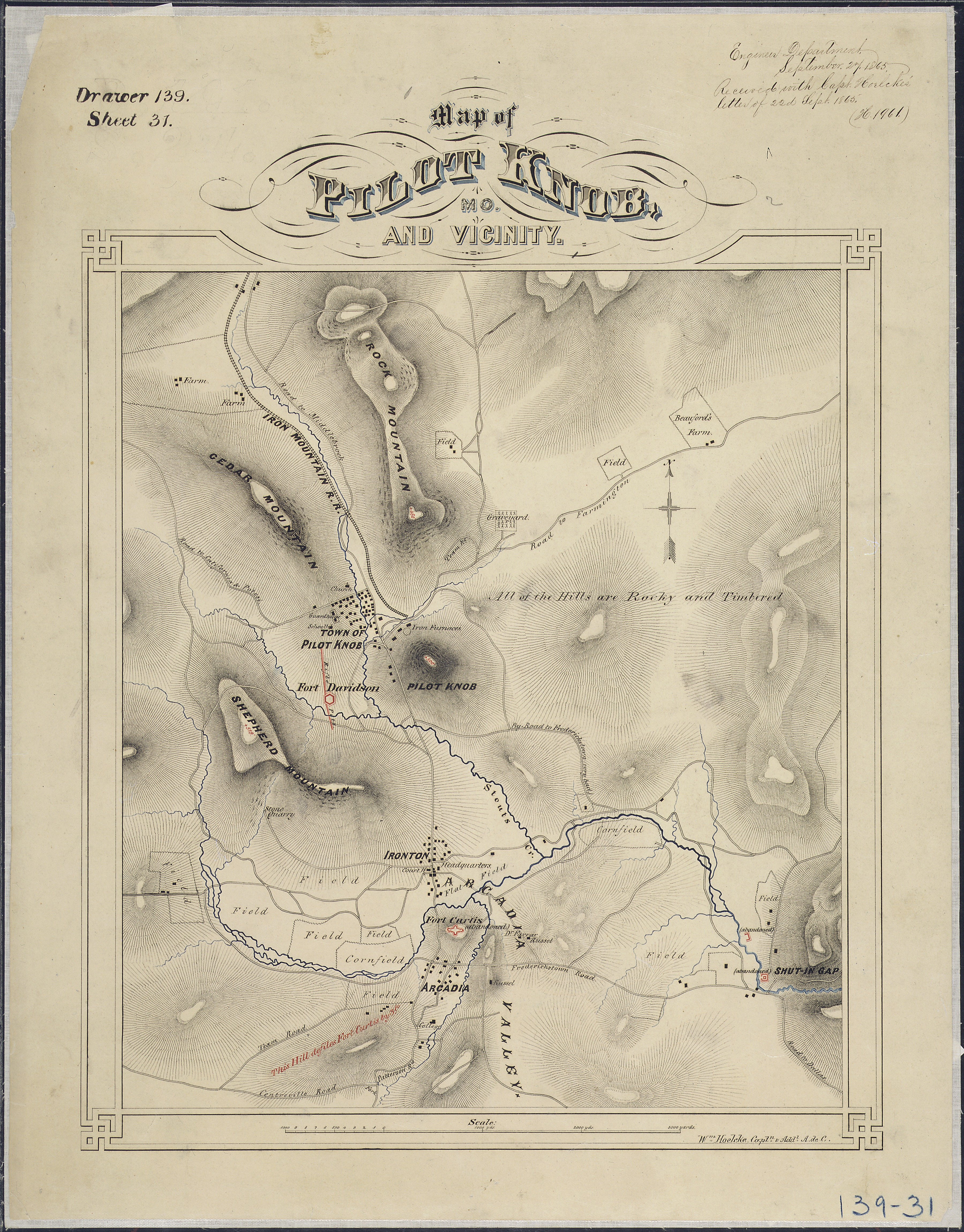 Union General Thomas Ewing. A staunch abolitionist, he was instrumental in the fight to make Kansas a free state. As a young man, he was personal secretary to President Zachary Taylor, and after the war served in Congress. 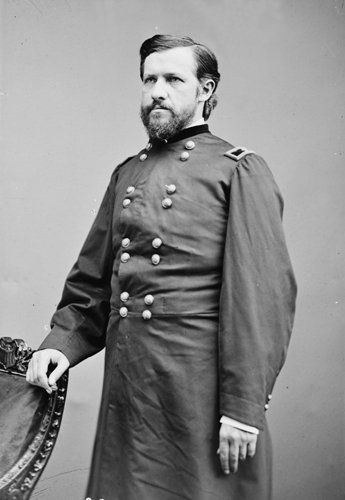 Confederate General Sterling Price. Before the war, he served several terms in the House of Representatives, and was Missouri's 11th governor from 1853-1857. 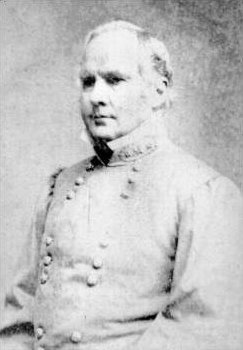 Gen. John S. Marmaduke commanded roughly a third of Price's invasion force during the raid. A graduate of West Point, he was captured in one of the final battles of the campaign, at Mine Creek, Kansas. 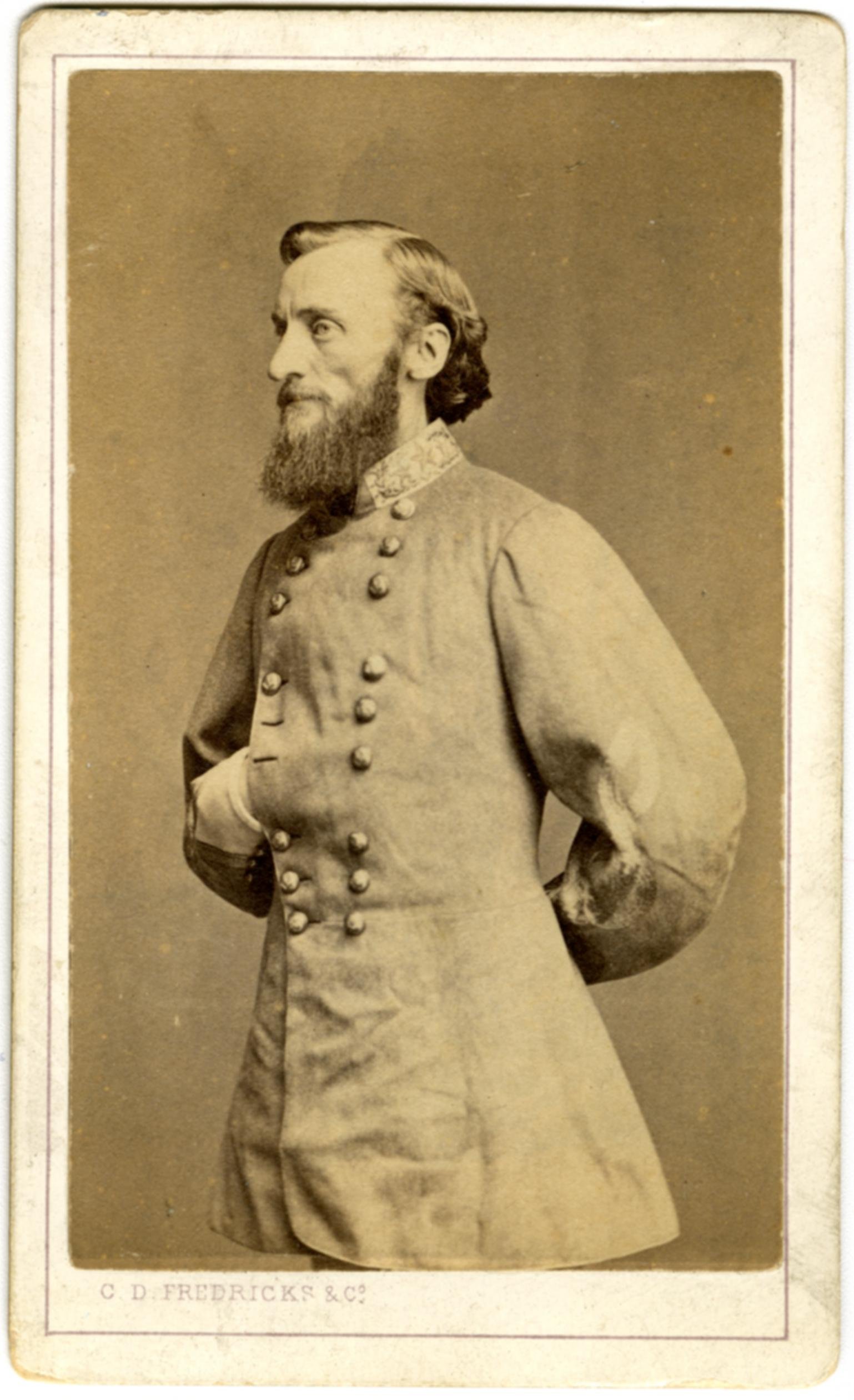 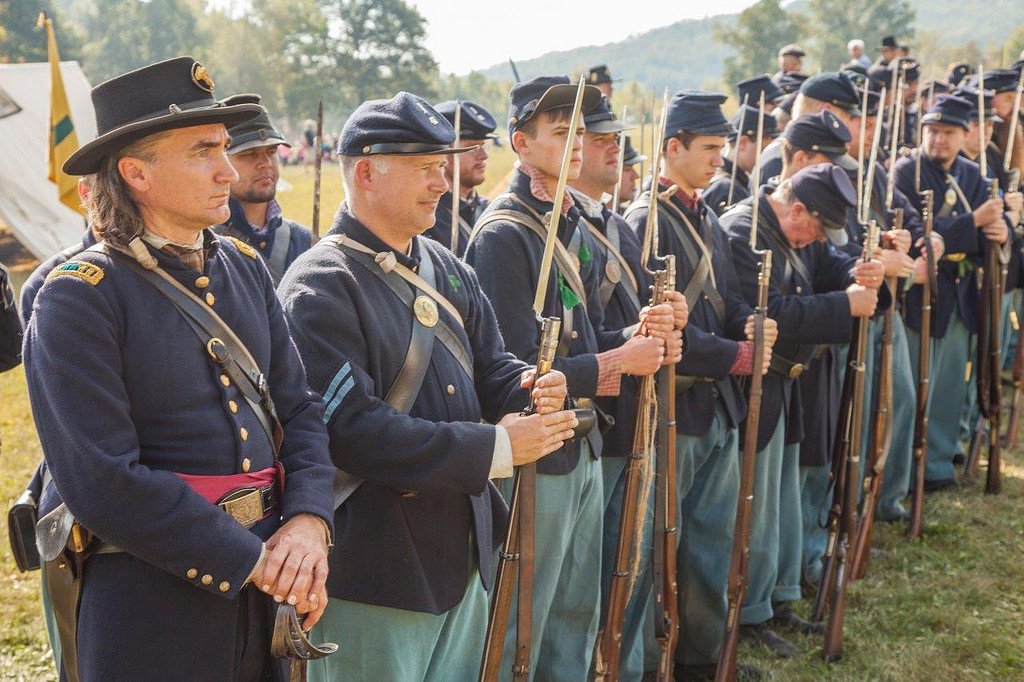 Confederate reenactors at the 2017 Battle of Pilot Knob. 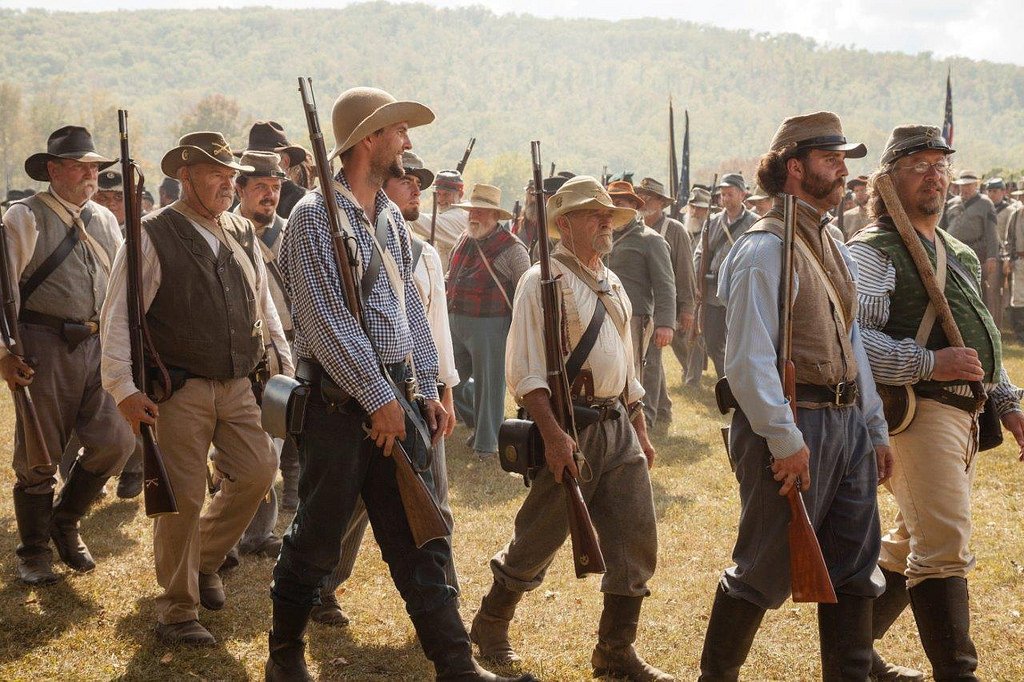 Kyle S. Sinisi's thorough text is one of the most extensive on the raid. The historian argues for a more conservative Confederate casualty count at Fort Davidson, and makes a case that it was less of a bloodbath than is generally assumed. 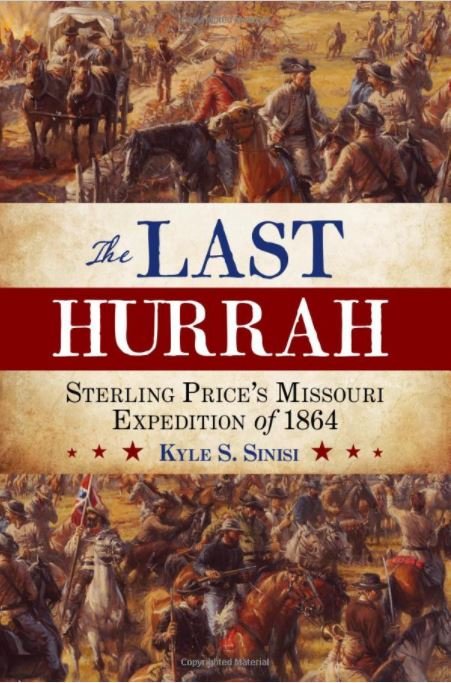 By the end of the summer in 1864, the tide of the American Civil War had turned against the southern Confederacy. Crippling blows at Gettysburg and Vicksburg in 1863 had forced Confederate armies onto the defensive. By August 1864, Robert E. Lee’s Confederate army was under siege at Petersburg. With the U.S. Presidential election of 1864 growing nigh, the Confederacy hoped a handful of quick military victories could defeat Lincoln at the ballot and elect an administration that would sue for peace.

Thus was conceived General Sterling Price's Missouri Expedition. Its initial objective was to march north from Arkansas into Missouri, seize St. Louis and install a Confederate governor, once and for all securing the state for the South. To this end, Price was to have 12,000 troops with which to strike at a number of scattered and unsuspecting Union garrisons. By the time he marched into Missouri on September 19, 1864, however, many of his original veterans had been sent to more desperate fighting fronts--and were replaced with green conscripts. Nearly a quarter of his force was comprised of deserters who had been apprehended and sent back into the fight, and perhaps as many as 3,000 men lacked weapons. Others were missing shoes, canteens, cartridge boxes or other necessities.

Skirmishing his way toward St. Louis, Price quickly overwhelmed the outnumbered Union patrols in his path. The Federal commander in the region, Gen. William S. Rosecrans, having only 6,000 men to police a massive region infested with Confederate sympathizers and spies, did not learn of Price's advance until Sept. 24. Rosecrans quickly dispatched Gen. Thomas Ewing with a small columnn to reinforce Fort Davidson at the town of Pilot Knob--the only significant Union fortification in Price's path. Arriving by railroad at noon on Sept. 26, Ewing's 200 Iowans brought the garrison up to approximately 1,200 men.

Ewing immediately sent two companies of the 14th Iowa infantry on a patrol south to Ironton which soon violently encountered Price's vanguard under Gen. James Fagan. A rainstorm allowed the outnumbered Federals to hold their positions in Ironton overnight, but at dawn on Sept. 27 Fagan renewed the attack and pushed the Union troops northward out of town. As the action spilled into the narrow valley between Shepherd Mountain and Pilot Knob mountain (which connects Ironton to the town of Pilot Knob), Ewing ordered his retreating skirmishers up into the heights on either side, allowing his heavy artillery in the fort to fire upon the quickly advancing Confederates. Soon Price had suffered nearly 200 casualties in a skirmish that only succeeded in pushing Ewing's men back to their redoubts at Fort Davidson.

By this time, however, as many as 9,000 of Price's troops were swarming into the area surrounding Fort Davidson. The hexagonal fort, though dominated by the nearby hills, was well-protected from assault, consisting of earthen walls 9-feet high and 10-feet thick, surrounded by a dry moat 9-feet deep. The only entrance was a drawbridge at the southeastern corner. In addition to some rifle pits outside the walls, Fort Davidson was furnished with a substantial artillery complement: four siege guns, three howitzers, and six field artillery pieces. The ground outside the walls had been cleared for 300 yards in all directions, giving both cannons and muskets a deadly field of fire.

Ewing refused several calls to surrender the fort. In later writings, he claimed to have considered the offer but recalled the massacre of African Americans by troops under Confederate General Nathan Bedford Forrest at Fort Pillow earlier that year. Concerned about the large number of African Americans in his camp, he readied his men to repel Price's assault. There was only room for roughly 300 of Ewing's 1,200 men atop Fort Davidson's walls, so the remaining infantrymen were detailed to remain in cover and reload guns being fired by the men on the parapet.

When Price's men charged out from the treeline at 2 PM, Ewing's troops held their fire until the Confederates were well within effective range, finally cutting loose with deadly accuracy over the open ground the Rebels were forced to cross. With freshly reloaded muskets being handed up to them by the men below, the defenders were able to maintain a devastating rate of fire, backed up by a hail of canister shot from the fort's artillery. Despite taking a staggering number of casualties as they assaulted three sides of the fort, some of Price's men made it to the fort's walls, only to find they could not scale them from the bottom of the moat. The Union troops dropped grenades improvised from artillery shells down upon the Confederates as they desperately sought a means to climb the fortifications.

In a mere twenty minutes, the assault was broken. Over a thousand Confederates lay dead or wounded in the open fields surrounding the fort (though historian Kyle Sinisi argues for a maximum Confederate casualty count of 500 in his thoroughly researched account of the raid, and disputes the commonly-held account that Price's army was rendered nearly ineffective by the assault). His best troops having been spent in the attack, Price pulled his forces back into disorganized, scattered camps. The buildings of Ironton overflowed with Confederate wounded. And as a rainy night fell over the battlefield, Ewing made a crucial decision.

Though he'd suffered fewer than 150 casualties, Ewing's outnumbered force was crucially low on gunpowder--so he commenced plans for a bold escape. Under cover of darkness, his troops broke camp. Canvas was draped over the drawbridge and hay was scattered around the fort to muffle the sound of wagon wheels and horses' hooves. In complete silence, over 1,000 Union troops and civilians slipped out of Fort Davidson. The columnn made its escape between several Confederate encampments; the few pickets who spotted the Federals assumed in the darkness that they were Rebel reinforcements moving into position.

At 2 AM on Sept. 28, after Ewing had made good his escape, a squad of men remaining in the fort set fire to the leftover artillery ammunition. Despite the racket, which was heard up to twenty miles away, Price mistook the explosion for an accident and failed to order anyone to investigate. When Confederate troops prepared to assault the fort at dawn, they discovered it empty. The giant crater where the magazine was destroyed remains evident to this day.

Price sent troops in pursuit of Ewing, but the Federals were able to fight their way through to rejoin Union forces in St. Louis. Price's plans for a quick seizure of Missouri were dashed. Nearly a week--and a tenth of his force--had been squandered at Fort Davidson. Ewing had bought Rosecrans time to fortify St. Louis. Determined to gain something from his chevauchée, Price turned toward Jefferson City but soon found that it, too had been reinforced. His raid progressed westward toward Kansas, where it would eventually meet defeat at the Battle of Mine Creek on Oct. 25.

The Battle of Pilot Knob State Historic Park preserves the grounds of the old Fort Davidson site, of which some partial ruins remain, and interprets the history of this small but important battle in the form of a museum at the site. A full-scale reenactment of the battle is held every third year (the most recent being September 2017).