The Battle of Kettle Creek was fought on February 14, 1779. Near this historical marker, American forces led by Colonel Andrew Pickens assaulted British Loyalists that had been camping along Kettle Creek. British Colonel John Boyd attempted to rally his men and retaliate against the Americans after repulsing the initial attack. Plagued by swampy terrain, however, these efforts were stymied. Boyd was mortally wounded as the American force eventually drove the Loyalists out of the area. The American rebels lost only 9 men in addition to 23 men who sustained injuries. The Loyalists lost an estimated 40-70 men in addition to seventy-five of their soldiers who were captured by the Americans. 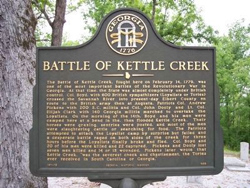 This nearby monument was created in 1930 to honor the Americans who fought at Kettle Creek. 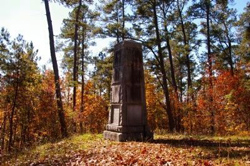 Following the Treaty of Alliance between the Continental Congress and France, British General Sir Henry Clinton withdrew his presence from Philadelphia to push forces towards New York. As the war for the North slowed into a stalemate, Clinton began preparations to push his forces south, believing there would be more support for the British cause. In the fall of 1778, Clinton directed forces to move against Savannah, Georgia, which lead to a successful attack and capture of the city by Lieutenant Colonel Archibald Campbell on December 29. The following month, Brigadier General Augustine Prevost took command of Savannah, directing Campbell to take about 1,000 men to secure Augusta.

Campbell began recruiting Loyalists with the help of Colonel John Boyd, who was ordered to raise Loyalists in the Carolinas. On January 30, Brigadier General John Ashe led 1,100 North Carolina militia men to assist Major General Benjamin Lincoln's forces. A battle between Georgia's militia and British Loyalists ensued along the Savannah River near Augusta. The assistance of South Carolina militia men prompted Colonel John Dooly to carry out offensive operations in Georgia, leading to an attack on a British camp, which was found to be empty upon arrival on February 10th. The Americans pursued the camp's men, eventually discovering them camping in Kettle Creek.

Colonel Andrew Pickens approached the camp with his men grouped to the left, right, and center in an attempt to engulf their opponent. Pickens' advance guard violated orders, firing upon the Loyalists and alerting Boyd to the American threat. Boyd rallied around 100 men to retaliate, but was slowed by the swampy terrain, and was wounded in the process. Major William Spurgen attempted to continue commanding the Loyalist, but extreme pressure forced them to retreat. The battle saw the killing of 9 Americans and the injuring of 23, while the Loyalists lost an estimated 40-70 men, with an additional 75 captured.