The Nathan and Mary (Polly) Johnson House, located at 21 Seventh Street in New Bedford, Massachusetts, is a significant building in the history of the city as well as the headquarters of the New Bedford Historical Society. The historical society celebrates the efforts of the Johnsons, the legacy of the abolitionist movement, and the history of African Americans, Cape Verdeans, Native Americans, West Indians and other people of color in New Bedford. The home was once owned by a free African-American couple who lived there and operated a successful catering and confectionery business. They also harbored escaped slaves as a stop on the Underground Railroad. The New Bedford Historical Society purchased the home in 1998. Two years later, it was designated as a National Historic Landmark and placed on the National Register of Historic Places. 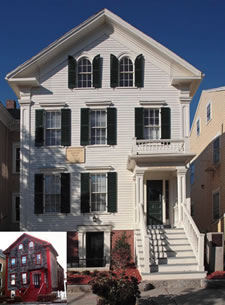 Plaque on the building, indicating that the property is a National Historic Landmark 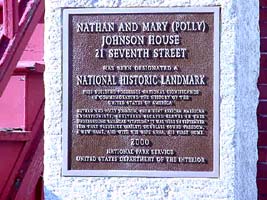 The Johnson House is actually two houses that were joined together in the 1850.  It was the home of Nathan and Mary (Polly) Johnson, a free African-American couple.  They also operated a very successful catering and confectionery business out of their house. In their candy shop, they sold items made with “free labor sugar,” meaning that the sugar was harvested by free labor, not slaves.

Perhaps the home is better known as a stop on the Underground Railroad.  Mr. and Mrs. Johnson were active abolitionists who helped escaped slaves journey north to freedom.  Frederick Douglass was the most famous of the individuals they had sheltered. This house is the last surviving dwelling where Frederick Douglass resided during his seven years (1838-1845) in New Bedford.

Mr. Nathan Johnson was a wealthy man and an avid supporter of the abolitionist movement.  He was a delegate from New Bedford to several conventions that worked to free the slaves, including the 1832 and 1833 annual conventions of people of color in Philadelphia and the 1834 convention in New York.  At the 1835 convention, Johnson was named a vice president of the group. In 1839, he was appointed as one of three colored men from Bristol County to visit the legislature and discuss the antislavery views of men in the area.  Johnson was elected president of the 1847 National Convention of Colored People, held at Troy, New York.

Johnson first became involved with the fugitive slaves when he witnessed the trial of John Randolph, who had escaped to New Bedford in 1817 or 1818.  An agent of Randolph’s former owner came to the city to retrieve him in 1822.  Fifteen years later, the Johnson household took in one of the most famous fugitives slaves in the nation.  New Bedford Quakers William C. Taber and Joseph Ricketson brought Frederick Douglass and his wife Anna to Nathan and Polly Johnson’s house in September of that year.  The Douglass family stayed in the home for about a year, until they were able to rent their own space on Elm Street.

A century and a half later, then home was facing demolition.  The property was saved by the members of the New Bedford Historical Society, which had formed in 1996. Its collections focus primarily on the contributions of African Americans, Cape Verdeans, Native Americans, West Indians, and other people of color in New Bedford, Massachusetts and the city’s rich, cultural heritage. New Bedford attracted escaping slaves because it was a very prosperous city (the whaling industry was a huge part of the city’s economy) and it was home to many Quakers, including the Johnsons, who were abolitionists. Soon after the group was formed, it learned that the historic Nathan and Mary (Polly) Johnson House was scheduled for demolition. It worked diligently to save the building by purchasing it for themselves, with the goal of preserving it for future generations, so that they may learn about the great importance it played in helping many escaped slaves reach freedom. Presently, the home serves as the headquarters of the New Bedford Historical Society.  The society has renovated the main floor of the house to make is available for community meetings and educational presentations. Further efforts to renovate and restore the house are ongoing.

The New Bedford Historical Society and the New Bedford Whaling National Historical Park have worked together to create a walking tour of various sites significant to the history of the Underground Railroad in the city.  The Johnson House is a featured stop on the tour.

Tours of the house are provided by appointment only. At least 48 hour notice is requested.