In 1917, 25 African American musicians joined together to form Musicians Protective Union Local No. 627. The support offered by the new union enabled many of them to turn their music into full-time careers by helping secure fair contracts and working conditions, and allowing them to put down roots in Kansas City instead of working as itinerant musicians. In 1929, the union was officially incorporated and purchased an apartment building at 1823 Highland Avenue, which the union converted into its headquarters. The union thrived, in 1958 creating the Mutual Musicians Foundation to manage the building and other union assets. Though Local 627 was forced to merge with the white musicians union, Local 34, in 1970, the Mutual Musicians Foundation remains a social club and living museum, a testament to Kansas City's rich musical history and the power of labor organizing.

The welcoming sign to the Mutual Musicians' Foundation Incorporated 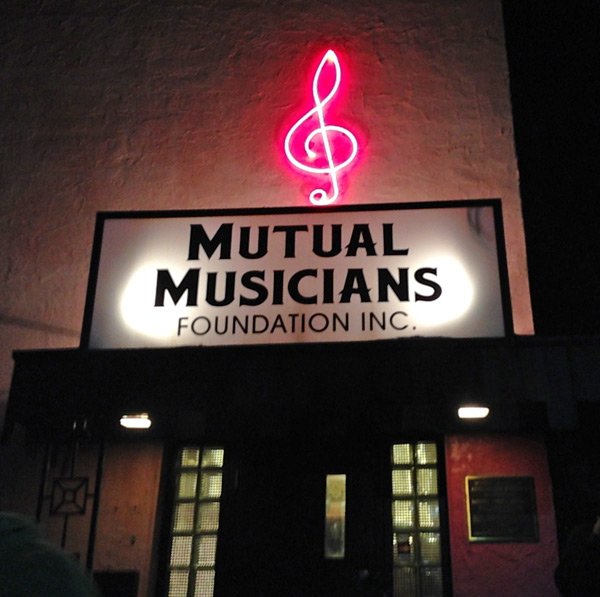 Musicians of the Local 627 at Lincoln Electric Park, August 1917. 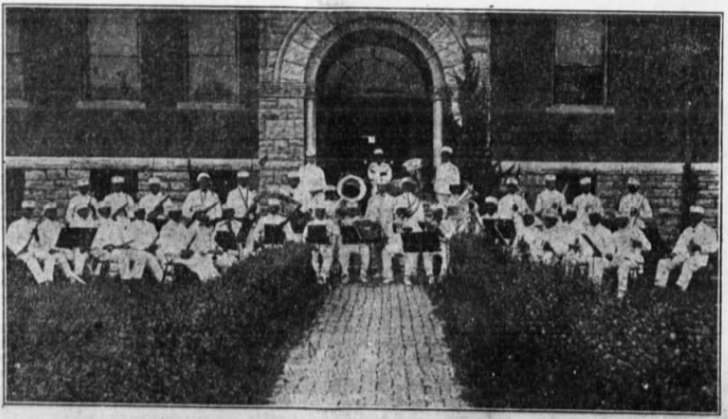 Musicians Protective Union Local 627 wasn't always headquartered at 1823 Highland Avenue. When the union was created in 1917 to secure better working rights and wages for African American musicians, who were excluded from white workers' unions in the city, the union headquarters was at 18th Street. The musicians had a 14-piece band and played weekly concerts—called "Sunday Evening Promenade[s]"—at Academy Hall. [1] A quarter would get guests in the door, with dancing set to start at 8:30 p.m. Soon, however, the union's membership expanded, in tandem with the growing music scene in Kansas City, and the musicians were playing for crowds of up to 2,000 dancers. [2]

In the late 1920s, under the leadership of union president William Shaw, the union became increasingly successful. Membership nearly quadrupled in the three years between 1927 and 1930, reaching 327 members that year. [3] Shaw also saw to the formal incorporation of the union as the "Negro Musicians Associations," for "the following purposes":

To unite the instrumental portions of the musical profession for the better protection of its members; to serve the public in furnishing music on all occasions where it may be required; to establish and maintain a minimum rate of price to be charged for the professional services of its members; to furnish music to the public for its entertainment on public and private occasions; and to enforce good faith and fair dealing of its members in their dealing with and relation to the general public.. [4]

In the same year, the union raised money to purchase 1823 Highland Avenue from the E.E. Pullum Realty Company for $4750, to be paid in $35 monthly installments at a 6 percent interest rate. [5] A huge ball in December 1929, featuring Bennie Moten and George Lee among others, helped raise funds to convert the building from apartments into a union headquarters. [6]

The 1930s were a golden age for Local 627. Historian Edward Miszczuk estimated in 1979 that it was "a second home, a training ground and a source of jobs for approximately 90 percent of the musicians who created the powerful Kansas City sound of the 30's and 40's." [7] But despite their professional success and widespread popularity among both African American and white audiences, the musicians faced discrimination in the very venues that contracted them to play: as union member Marvin Leon Achyutan Pattillo recalled, "There was Johnny Baker’s, where I played with Jay McShann, out on Troost. That was a white club but had a Black band in it. After we would take our intermissions we would have to go down in the basement." [8]

Things became difficult for the musicians, however, when the 1940s rolled around, bringing with them a city-wide campaign to clear up the vice that flourished alongside jazz in the licentious Pendergast years. While many clubs in the 18th & Vine district shut down and were eventually razed in the 1950s and 1960s, Local 627 managed to keep the doors open and provide most of the best opportunities to its members, to the dismay of the white Local 34. Indeed, since the 1930s there had been calls from the white union to merge with Local 627, calls that the local had always resisted. In 1970, however, the American Federation of Musicians, the national body for both unions, stepped in and forced the merger. Local 627 had to leave its headquarters on Highland Avenue, but the Mutual Musicians Foundation, created in 1958 to manage the union building, continued to maintain the space as a social club and rehearsal venue for members.

Despite the role played by Local 627 in creating the working conditions and camaraderie that supported the Kansas City jazz tradition, and the fact that the building at 1823 Highland Avenue was one of few buildings associated with Black jazz musicians to survive urban renewal projects in the 1950s and 1960s, it was a challenge to secure its inclusion on the National Register of Historic Places—an inclusion that would help protect the building from the kinds urban development schemes that had destroyed so many other historic buildings in the 18th & Vine area and make available federal funds for restoration work. Architects and historians from the National Park Service objected to the modifications the local had made over the course of their tenure in the building, arguing that "the severity of the alterations in 1940s may have destroyed the integrity [of the building]." [9] Ultimately, however, the National Park Service accepted that the cultural and musical significance of the building was not dependent on its architectural immutability and entered it on the Register in 1979.

To this day, the Mutual Musicians Foundation remains a vibrant social and musical space, open into the wee hours on weekend nights. As in the 1920s and 1930s, jazz and alcohol go hand in hand, and the Foundation received a special exemption to continue serving drinks until 6 a.m.