This is a contributing entry for Foggy Bottom Historic District Walking Tour and only appears as part of that tour.Learn More.

Continuing on the east side of 25th Street, past the 925 Apartment building (b. 1959), are more modern buildings. One exception is No. 909, which was built in 1874 (although renovated in 1938). Across 25th Street – on the west side – stand 14 houses all built in the 1880s (900-922 25th St.). This is the longest row of original houses in the Historic District, and includes the house of the GWU Hospital surgeon who treated Ronald Reagan after his 1981 assassination attempt. Walk up the 2400 block of I Street, past additional historic row houses, to the Tour starting/ending point. 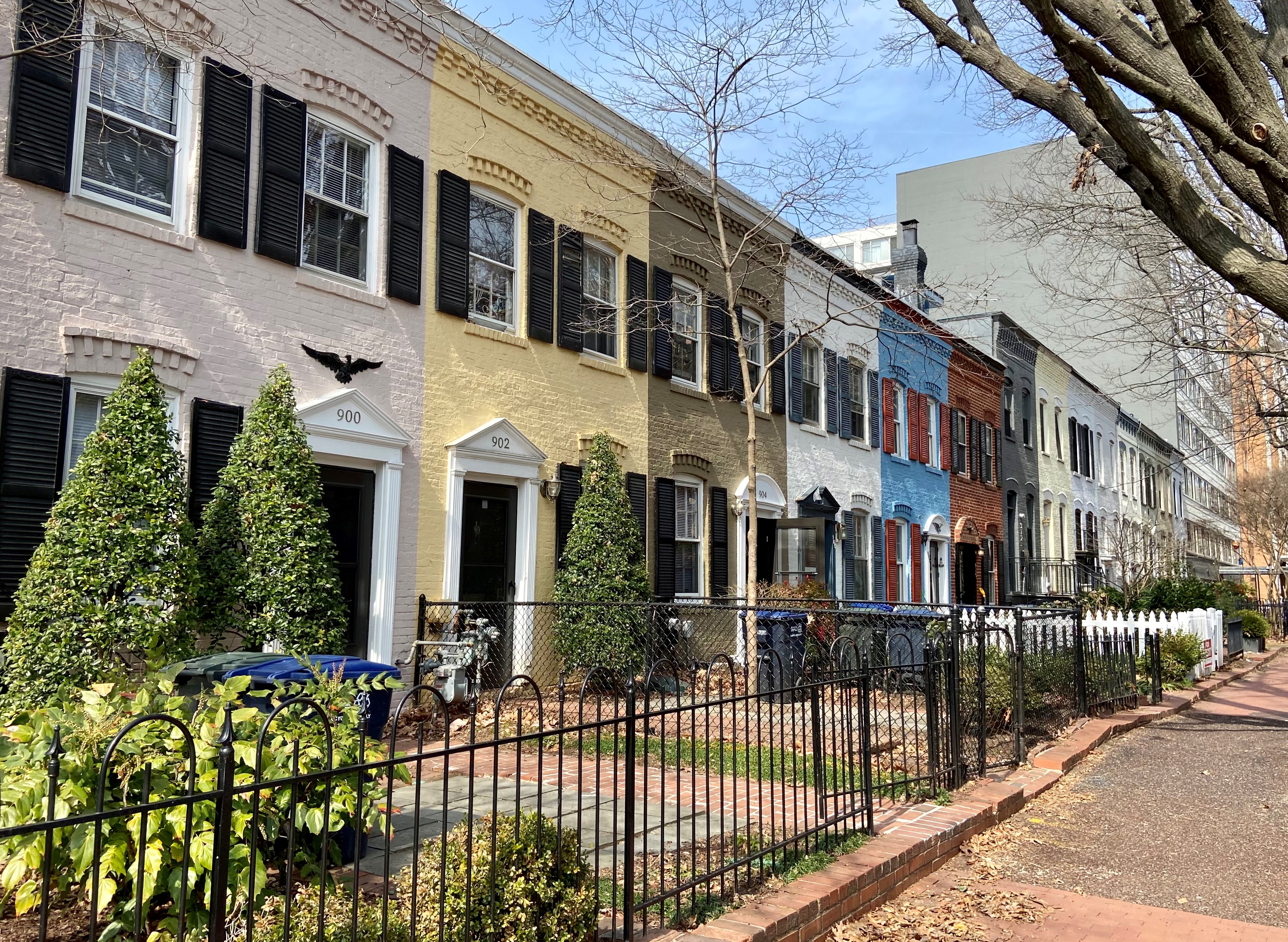 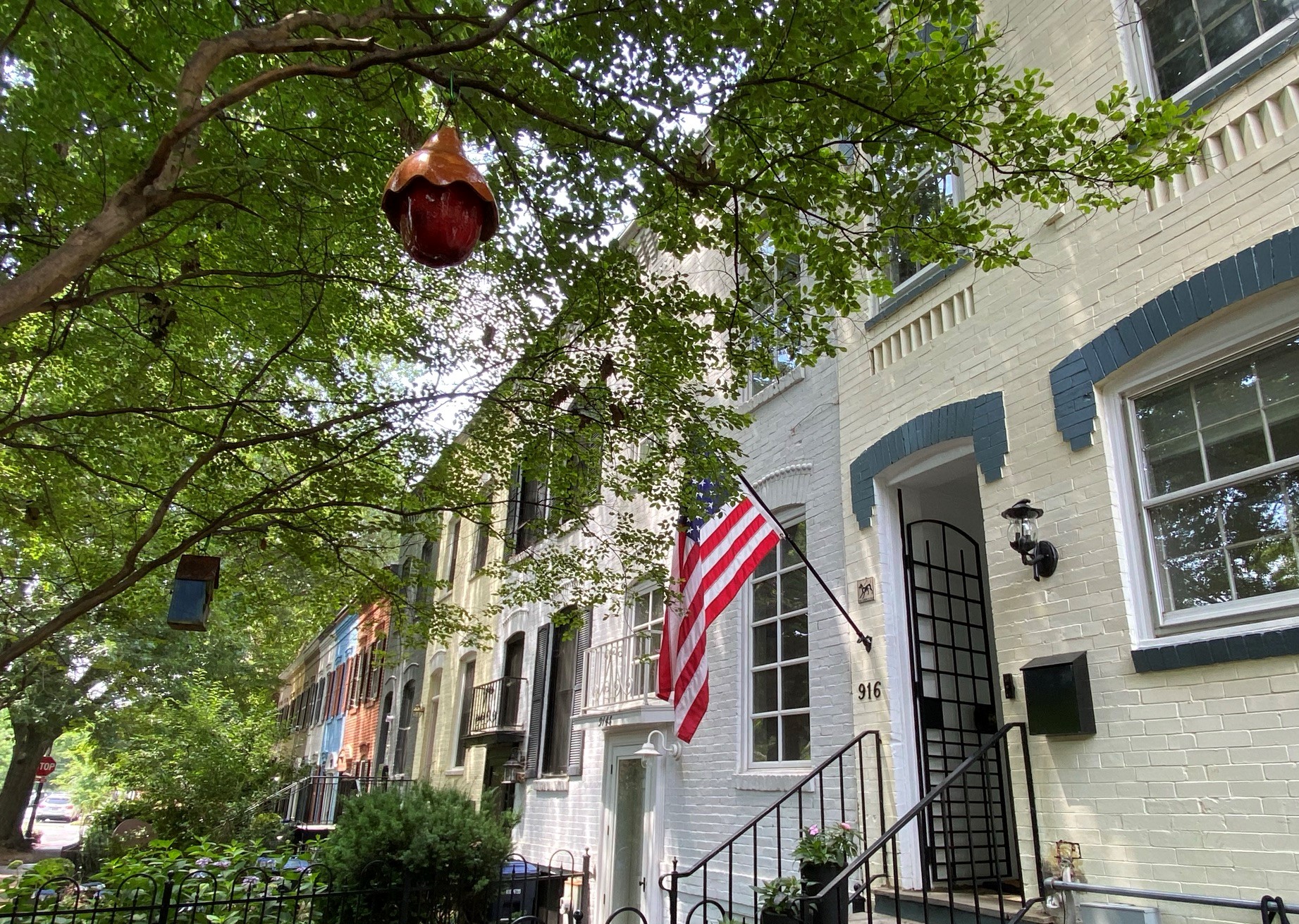 Eclectic facades on the east side of 25th Street 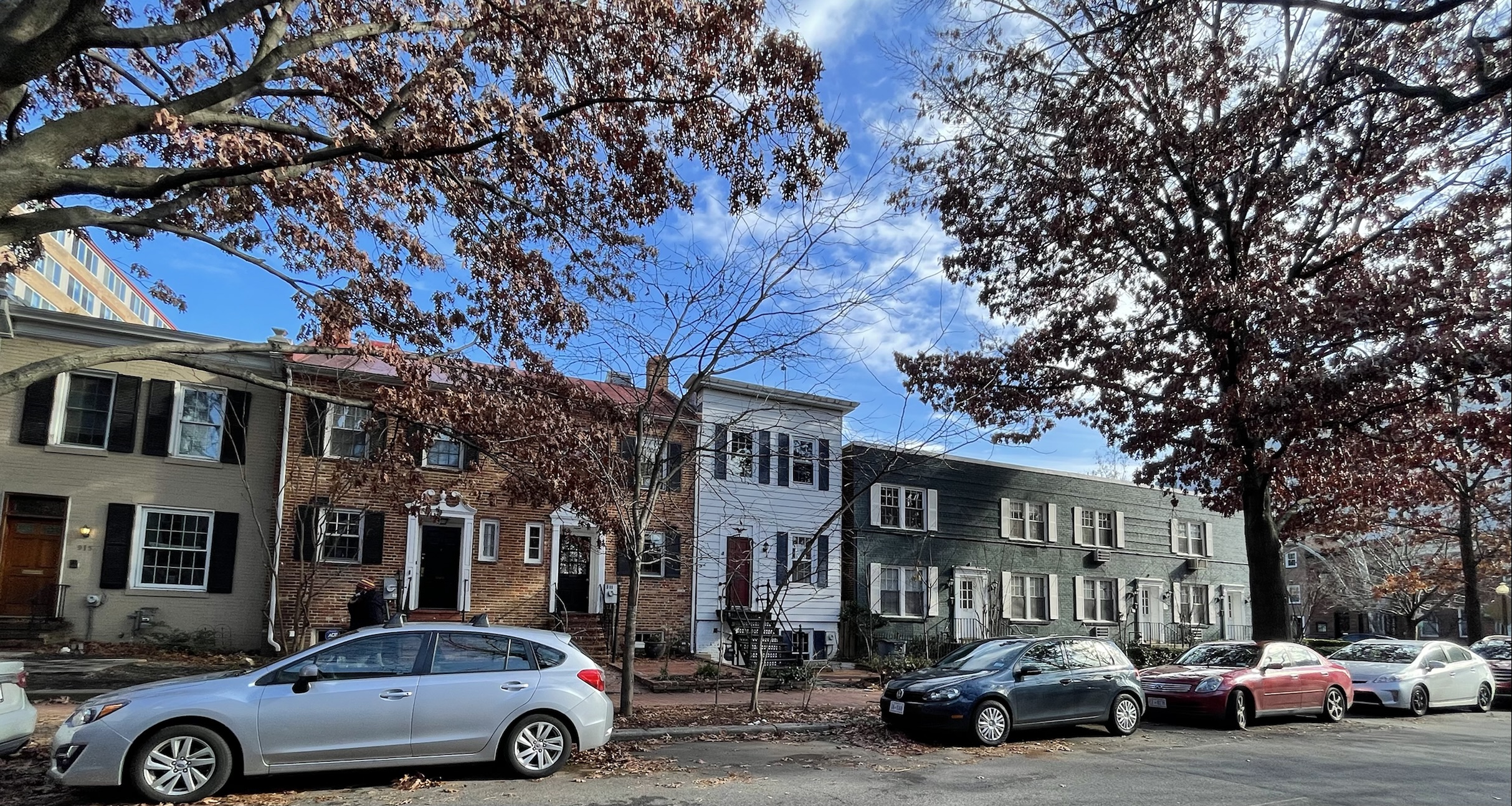 The unusual siding and vintage iron stairs at 909 25th Street 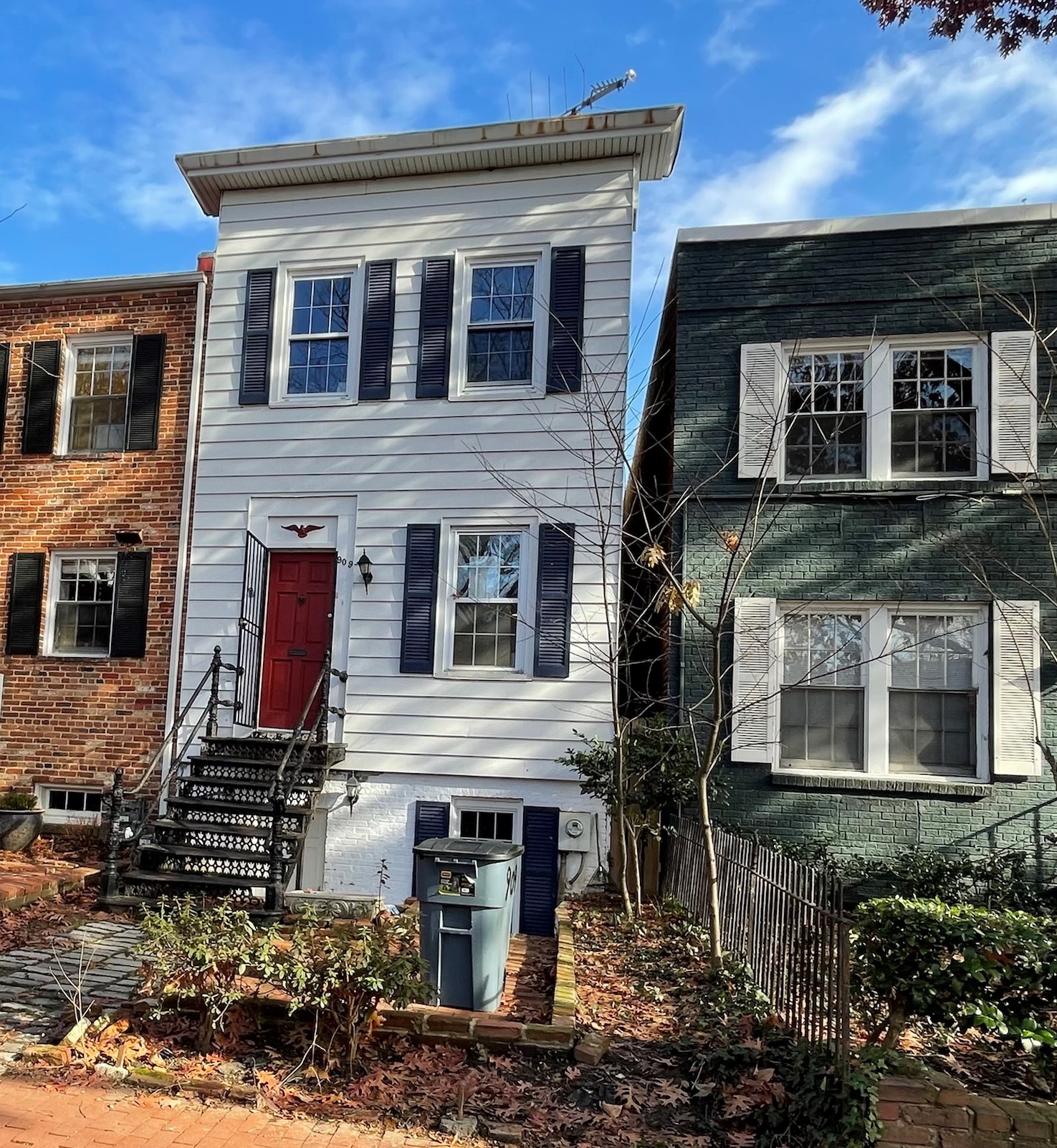 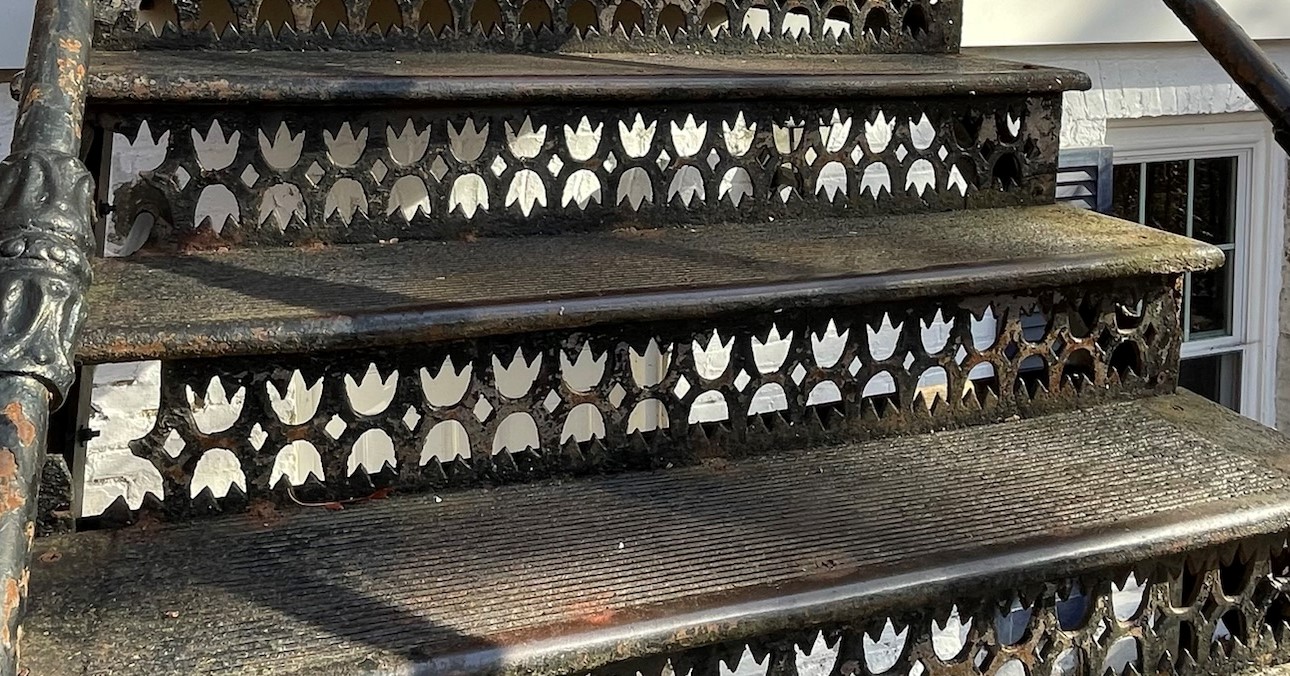 The left side of I Street, including the projecting bay of No. 2429 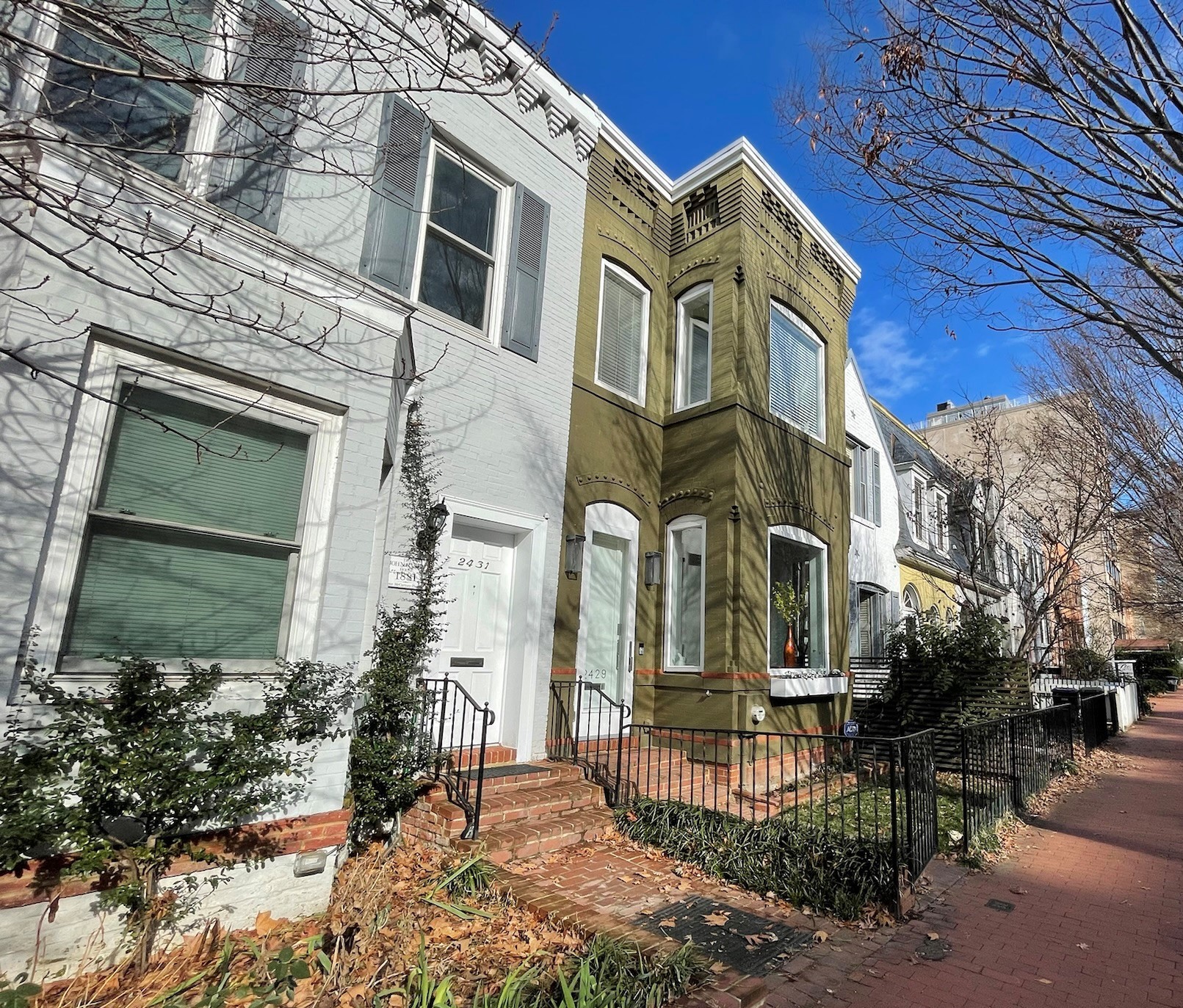 Detail of the cornice and window arches at 2429 I Street 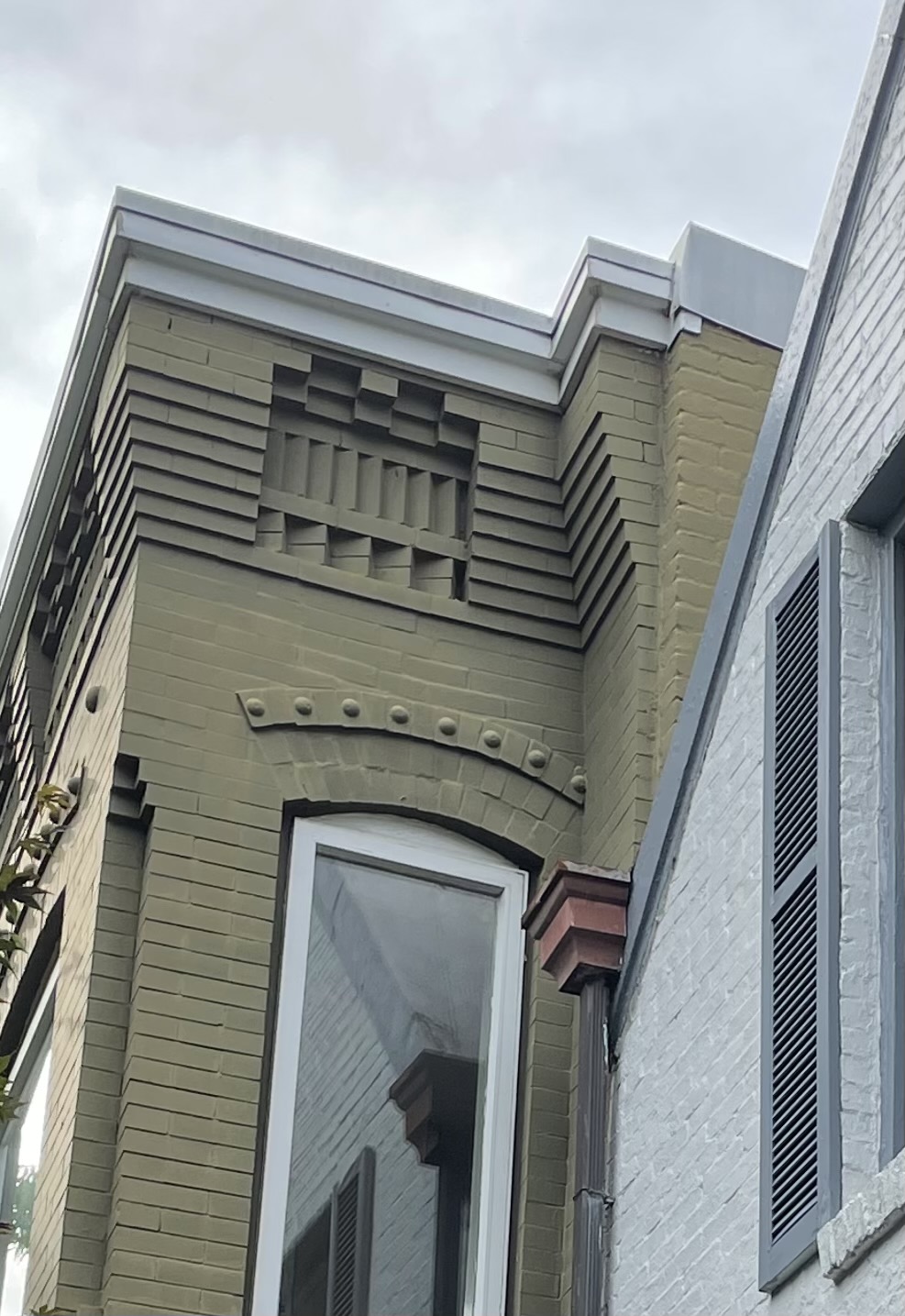 Detail of roofline of "early arts and crafts" houses, I Street 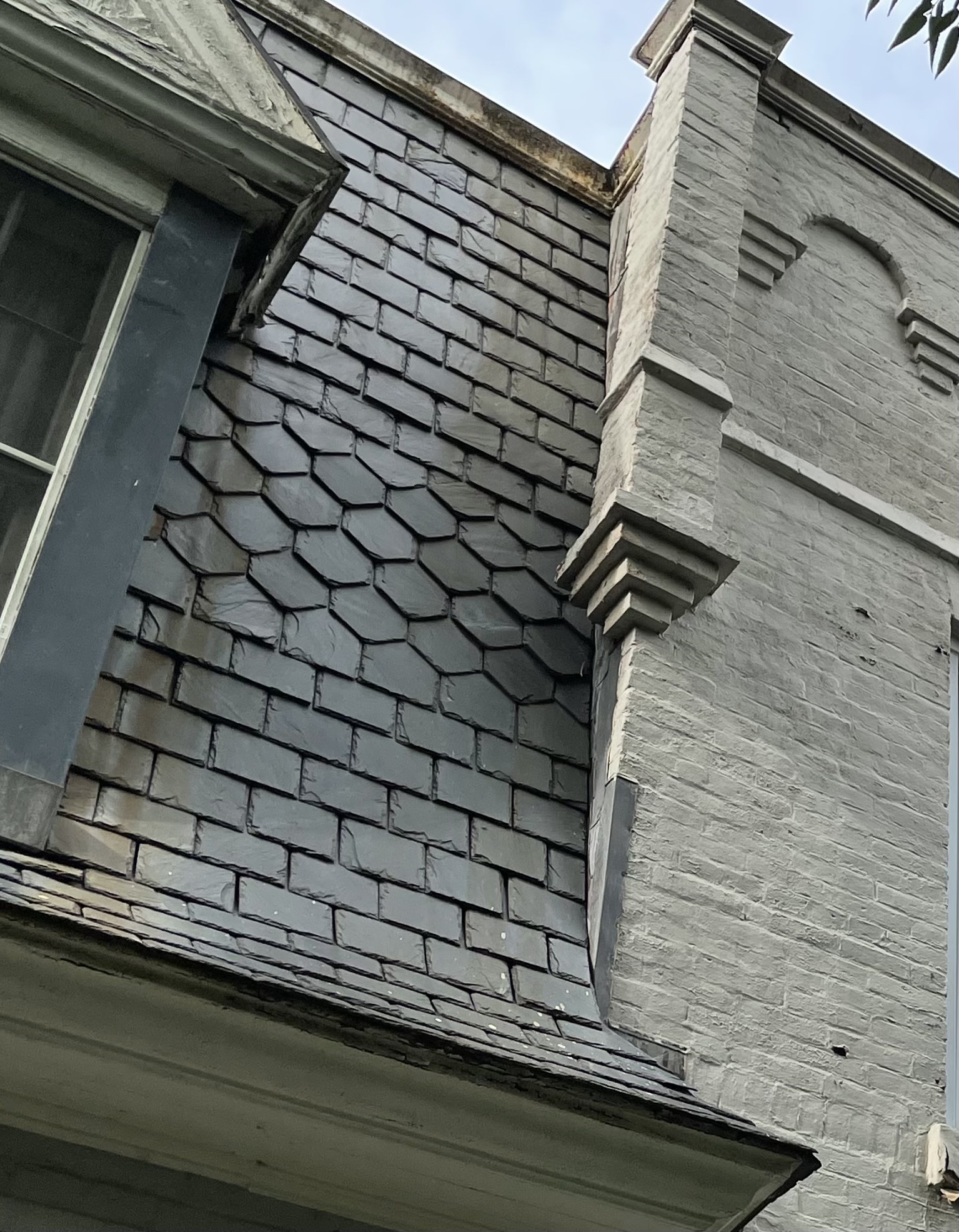 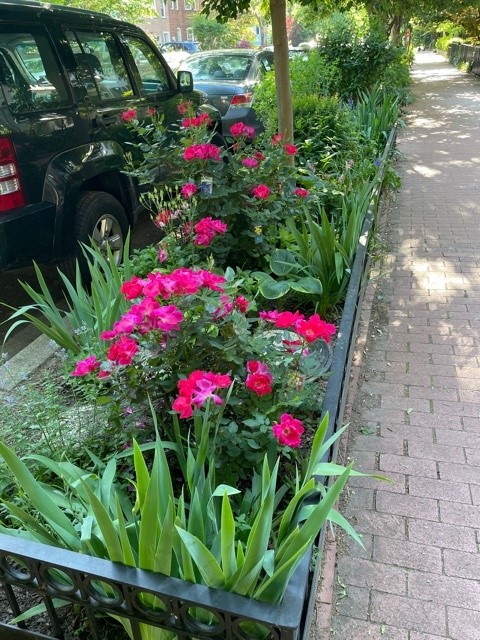 Last row of historic houses on I Street 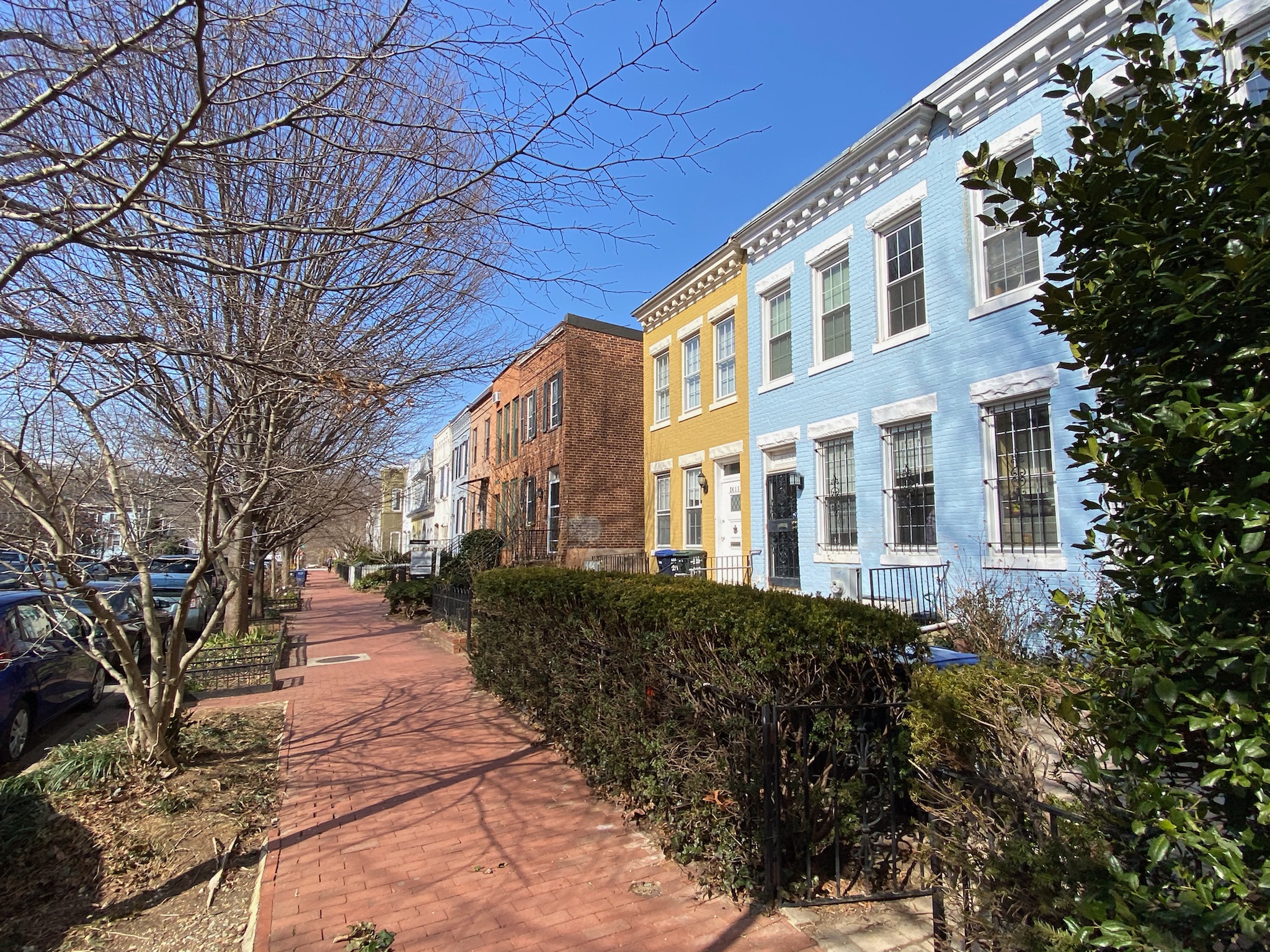 On the East side of 25th Street, the first two houses after the 925 Apartment building (917 and 915 25th St.) were built in 1909 by E.T. Crismond, with architect A.H. Beers, for Harry A. Kite. Kite and Beers collaborated on a number of building projects during that time period (including 2512-2518 I St.). Over his career, developer Kite was responsible for constructing over 1,400 houses and apartment buildings in the D.C. area. The next houses (Nos. 911 and 913) were built in 1956. No. 909 has a brick foundation with vinyl siding, and was built in 1874. Note the exquisite tulip pattern on the front cast-iron stairway. The remaining blue two story apartment building (Nos. 901-907) was built in 1940 by E.W. Beck for Edwin Shelton and K.J. Hardy, and designed by James J. Baldwin. In 1914 that corner was occupied by a saloon owned by Hugh J. McGinniss, which faced the saloon on the opposite corner of 25th and I Streets.

Looking to the west side of 25th Street, the continuous row of 14 similar style houses provides a contrast to the eclectic group of houses just described. The first six buildings on the west side (Nos. 900-910) illustrate how decorative brickwork adds visual interest to modestly-scaled buildings. The houses are two-stories high and two-bays wide. They feature alternating front door placements, and a variety of arches, pediments, and broken pediments above the doors. Note the corbel motif at the eves of the brick cornice and the segmental arched six-light grid windows. The next group of taller houses, Nos. 912-914 1/2, were built, designed, and owned by B.H. Warner & Co. as a speculative project in 1887. Danenhower & Son built, designed, and owned Nos. 916-922 in 1885. The narrow arched passageway between Nos. 918 and 920 has a brick pavement. It allows access to the back yards of residents of these houses and borders the back yards of the houses on Hughes Mews alley.

Dr. Joseph Giordano, who lived at No. 912, treated President Ronald Reagan at GWUH after his 1981 assassination attempt. Further down the block were more row houses, which in 1914 included two grocers, an oyster seller, and a shoemaker. The presence of so many small businesses in the primarily residential neighborhood no doubt contributed the welfare of the residents and made the area more self-sufficient. Details of the lives of those who lived here, however, have not been well-documented.

Take a left at the corner onto I Street and towards the tour's starting and ending point. The first two houses, with the entry alcoves (Nos. 2435 and 2433 I St.), were built in 1956. The white house next door (No. 2431) features a plaque indicating that Peter McCartney built the house for owner John Casey in 1881. It has a one-story polygonal bay, and currently operates as an Airbnb. The green house next door, No. 2429, was built for John Scanlon in 1885 and features a large projecting bay. The next row, Nos. 2427-2421 were built in 1889 for Wm. Tayloe Snyder, designed by Chas. Burden, and built by Joseph Burden. According to the Historic District Nomination, these houses "offer simple interpretations of the English vernacular design that gained popularity with the emergence of the English Arts and Crafts style. This early use is unusual and indicates a level of stylistic awareness that was not typical of Foggy Bottom.... The recessed entries and individually proportioned fenestration add to the charming character of this row." The next group (Nos. 2419-2413) were built by Duvall and Marr in 1885 (although note the new façade on No. 2415). Wide lintels accenting the windows and corbelled brick that decorates the cornices distinguish Nos. 2407-2411. This row was designed in 1909 by A.H. Beers for builder Simon Oppenheimer. They are two-stories high and three-bays wide.

Boyd's City Directory of the District of Columbia, 1914