The Trump-Lilly Farm is a quintessential example of subsistence farming in West Virginia. The farm is named for two families that occupied the homestead between 1888 and the latter half of the twentieth century. Life was difficult on the farm. The families grew crops, raised animals, hunted local game, and foraged whatever they could. Almost all of the buildings erected to serve the farm are still standing in their original condition, a contrast to many other farm buildings in Appalachia, which were demolished or modernized. This property is now owned by the National Park Service, which has stabilized and preserved the buildings and grounds as a space to visit and see what frontier life was like.

The main farmhouse on the homestead. 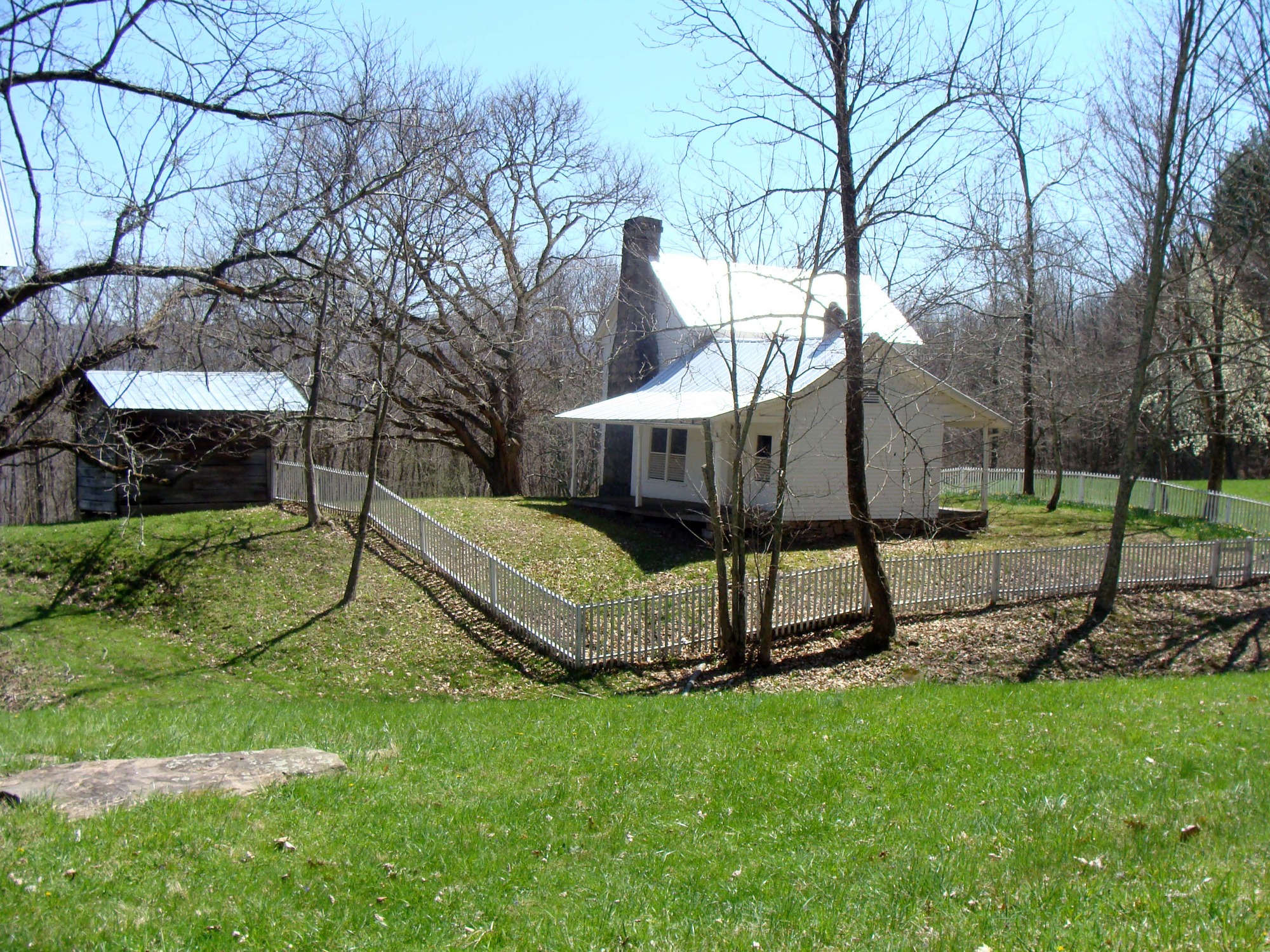 The interior of the farmhouse is beginning to deteriorate, as can be seen in this photo from a Historic American Buildings Survey of the property. 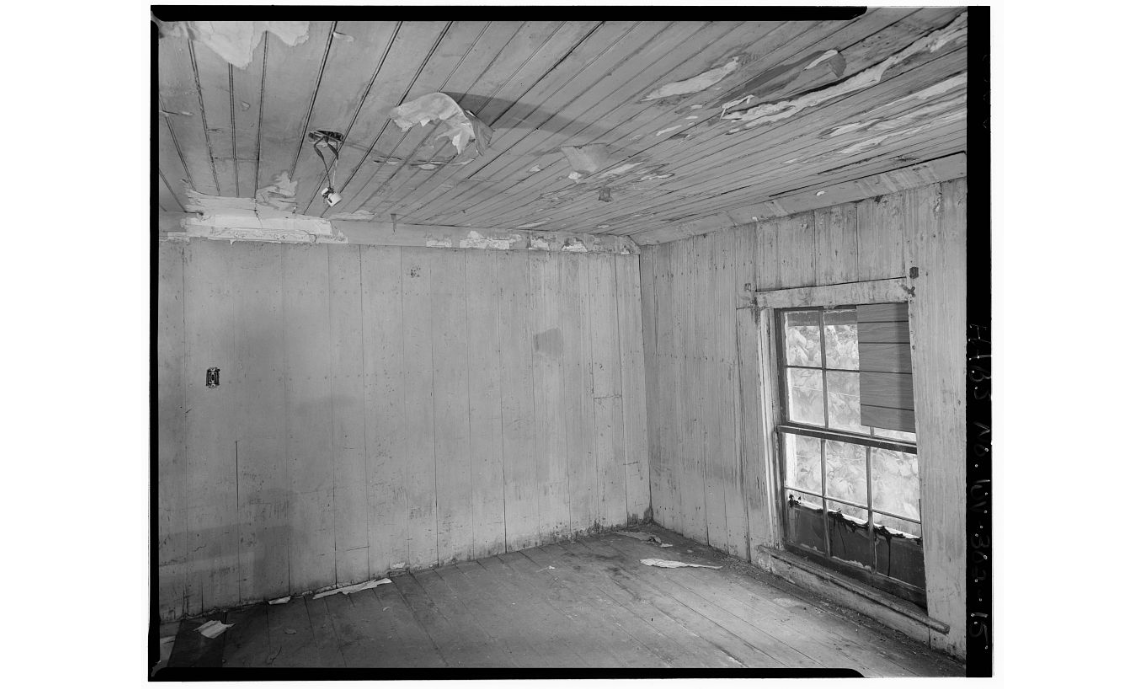 A view across a field at the farm. The tree in the middle ground is an apple tree, a remnant of the orchard that once fruited here. 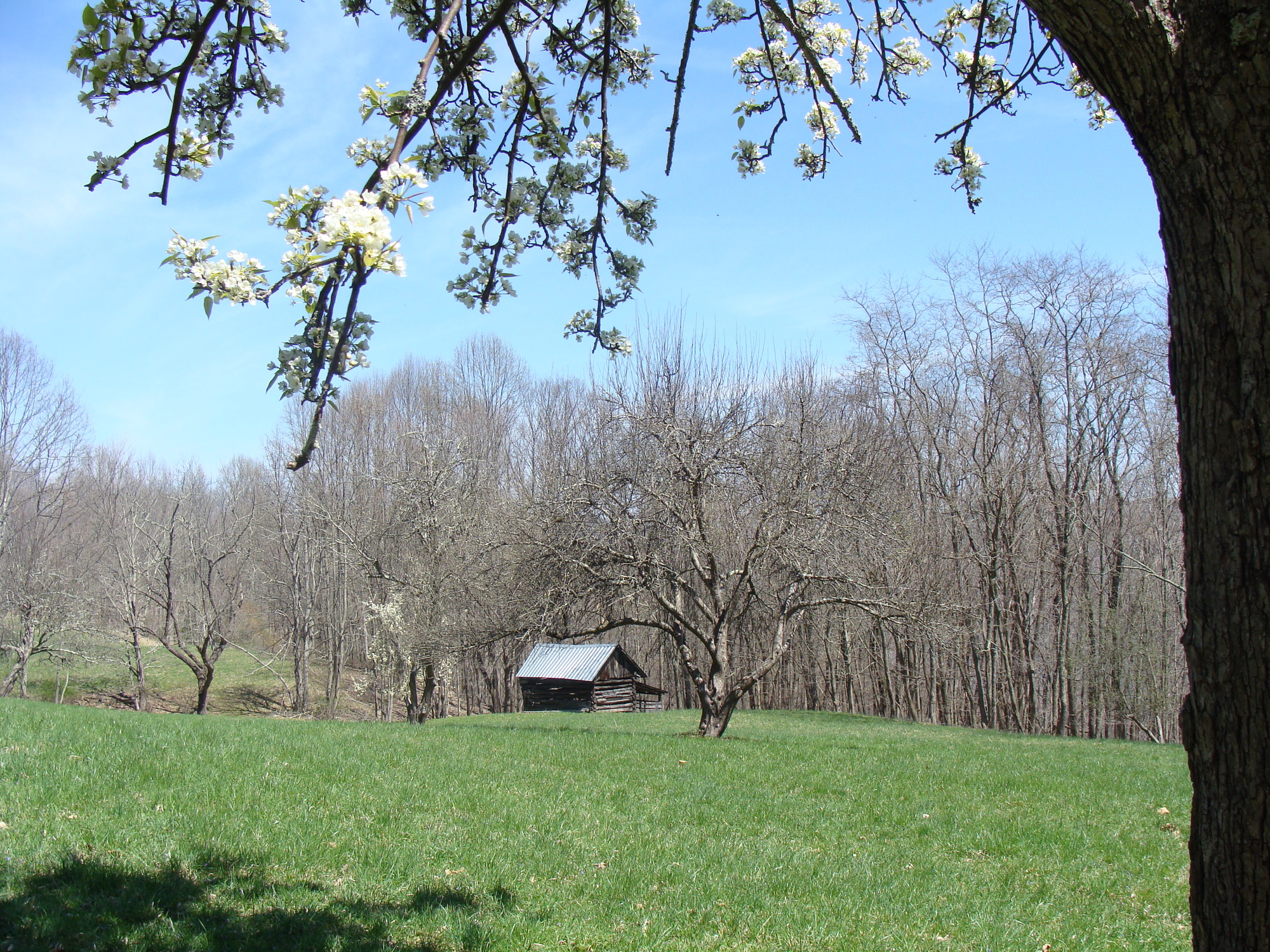 Map of the Trump-Lilly Farm. 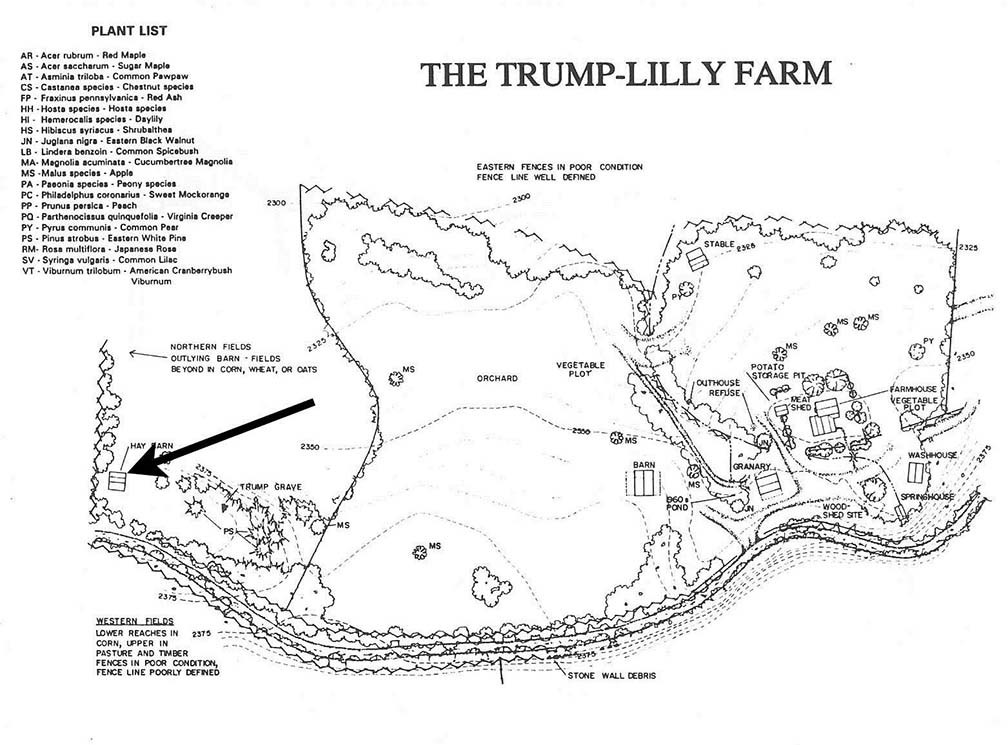 The Trump-Lilly Farm traces its roots back to Samuel L. Hopkins and Alexander Stuart. These two men were both land grant recipients in the earliest days of the United States. In the early nineteenth century — probably around 1810 or 1815 — Peter Davis purchased several hundred acres of land from Hopkins and Stuart and settled in the area. Davis later sold 150 acres of his land to William Richmond. It is possible Richmond utilized the land for some crops or livestock grazing, but he was more focused on the small town of Richmond Falls. There, he built a grist mill, post office, and general store. Despite Richmond’s contributions, the town is now known as Sandstone Falls. Davis also acquired some additional land, bringing the total acreage of what would become the Trump-Lilly farm to 202.

An aging Davis gifted the plot of land at the top of Sewell Knob to his daughter, Mary E. Trump, in 1888. Mary Trump and her husband, Richard Trump, established the first true homestead at Trump-Lilly Farm, though they did not occupy it long. Between 1905 and 1912, the farm changed hands several times before finally being purchased by Aden J. Lilly. Lilly and his family quickly began improving and expanding the farm so that it could serve all his subsistence needs. Within a few years, the farm had reached its current state, which remains frozen in time for visitors to experience.

Life was difficult at Trump-Lilly Farm. In contrast to the large farms in bordering Greenbrier County, The Lilly family’s homestead had no luxury of growing cash crops. Everything grown, harvested, hunted, or gathered was consumed directly or reserved for essential trade. A grove of chestnut and oak trees provided building and heating materials. Crops for livestock consumption were grown in larger fields while smaller plots were used to cultivate potatoes, onions, cabbage, beans, and turnips. A small apple orchard was also present. Sheep raised on the homestead served two purposes: providing wool for vestments and lambs to sell in order to pay taxes. Chickens, cows, and pigs were also raised in smaller numbers, with only the lattermost being slaughtered for meat. Finally, foraging edible plants from the forest and hunting small game, such as turkeys and rabbits, helped round out the food supplies on the farm.

Despite the difficult life led by the Lilly family, their experience should not be understood as joyless or isolated. On the contrary, there were plenty of opportunities for enjoyment and community was a cornerstone of existence. The Lilly children were relatively well educated and always had ample textbooks and learning materials. A battery operated Croby radio allowed the family to stay abreast with current events and leisure programming. An organ case piano was used to play music. The Lillys attended church every Sunday and were active members in the congregation. Additionally, the local community was relatively tight-knit. Farmers in the area helped each other harvest crops, drive livestock, and even share grist and cane mills.

Unlike most historic homesteads and subsistence farms in southern West Virginia, the Trump-Lilly farm was not adapted for modern farming techniques. Aden Lilly sold the land to his son, Oba Lilly, in 1963, but Oba did not live at the farm and visited only rarely. Oba later resold the farm to David Rosenberger, who used it as a vacation rental. In 1989, Rosenberger sold the Trump-Lilly Farm to its current owner, the National Park Service. The National Park Service maintains the site as a quintessential example of subsistence farming in West Virginia. Of the structures erected by the Lilly family on the site, all but three of them remain. A woodshed, chicken coop, and pig pen have been lost to time, but many other buildings remain, lending a remarkable degree of historical integrity to the site. 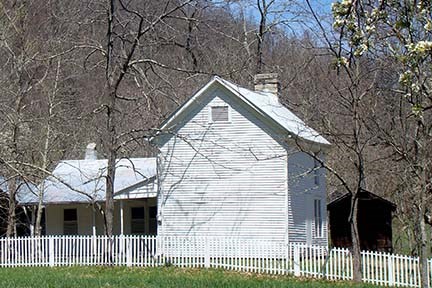 Trump-Lilly Farm’s farmhouse was built by Richard Trump ca. 1880. The two-story wood building is stylistically typical of more southern farmhouses. The gabled roof was initially shingled with wooden shakes, though it has been overlaid with asphalt roofing. A sandstone chimney pierces the back wall of the building and would have provided heat for the entire house. The farmhouse is one room deep and divided into two rooms on each floor. Two porches, one on each side of the building, attach to a separate kitchen building. The kitchen was built away from the main home to mitigate the risk of a disastrous fire. Windows are placed irregularly on the main building and are six over six or four over four sash windows. The interior has been somewhat stabilized, but is greatly decayed from its original state.

The meat shed was constructed around 1920. As the name suggests, it was used to store meat for the winter when food was harder to come by. Hogs were butchered and then cut into hams and bacon before being heavily salted for preservation. In addition to meat, this shed was also used to store flour and cornmeal, while the raw grains were stored in the granary. As it is a smaller building, the meat shed utilizes horizontal board construction rather than full logs. 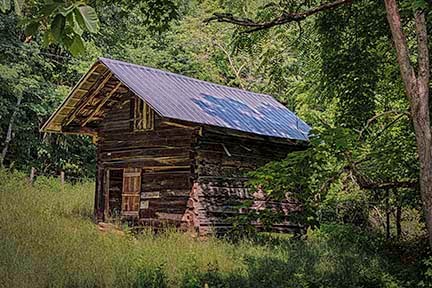 The granary was used for storing corn or other grain crops. These crops served the dual purpose of providing bread for the family and feeding livestock. The granary’s position near the house indicates the importance of the building. This importance is underscored by the slightly raised foundation of the granary. By elevating the building off the ground, there was less chance of mice or other pests infiltrating the stores. The roof has been replaced more recently, but the chestnut logs attached with half-dovetails are original. 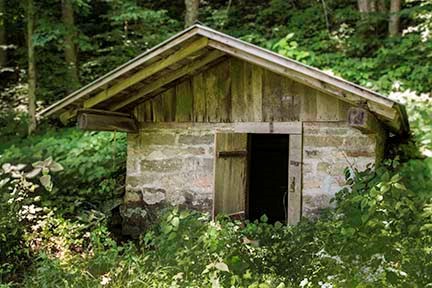 The springhouse was one of the most vital buildings on Trump-Lilly Farm. One of the first criteria in choosing a place to settle was ensuring access to plentiful clean water. When a natural spring was found at this location, a building to protect it followed soon after. In contrast to many buildings on the farm, the springhouse has rough stone masonry walls. Between the construction materials and natural spring, the building was cool year round, making it a perfect place to store jellies, butter, and dairy products. The springhouse was also where laundry was washed before the completion of the wash house.

The wash house was built on the property later than most buildings, as construction was completed circa 1948. The springhouse was originally where the family went to do laundry but the wash house replaced it once electricity was run to the homestead. An electric wringer type washing machine was used in this building. A number two wash tub — effectively a large galvanized metal bucket — was also placed in the wash house for personal bathing. Much of the building’s siding was replaced by the National Park Service. 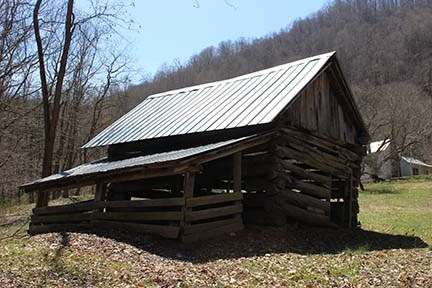 The stable, also known as the “little barn” provided shelter to sheep during the winter months. The structure was collapsing when the National Park Service acquired it and has since been stabilized. The roof has also been covered with modern material to help protect the building from the elements.

The main barn was likely one of the first structures built on Trump-Lilly Farm. A relatively simple wooden building, it was used to shelter cattle and draft horses at night or in the winter. Like most buildings on the farm, the logs are hewn from a chestnut grove across what is now Route 26. The logs were squared off to provide additional stability and attached using half-dovetail notching. In addition to housing animals, the barn loft was likely also used for storing farm equipment. 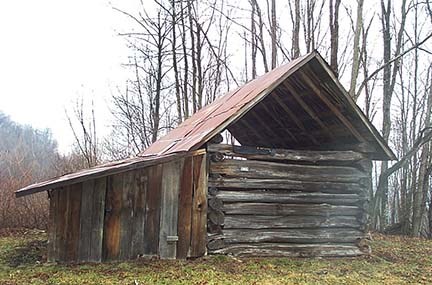 The haybarn stored hay and other feed for the livestock. There was also room to shelter additional sheep or other livestock that would not fit in the stable during the winter.